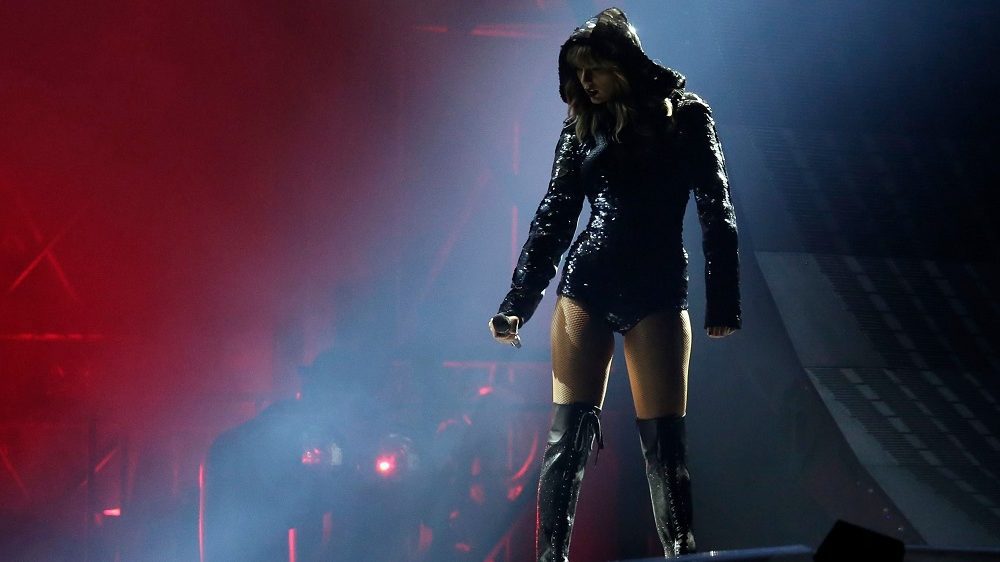 I am paraphrasing but the sentiment holds true. She explained she had passed out light up bracelets so that she was not looking out into a black void bereft of any signs of humanity. She could truly see those lights up in the upper deck. I was sitting front row in the lower bowl for this spectacular show diagonally opposed to the upper deck that she pointed to and I could see them shake in excitement because their bracelets jostled as they moved. She had not just connected herself to those gleeful fans, but had connected the entire stadium of 70,000 or so into watching that moment. That is Arena Rock 101: collapsing a gargantuan space into an intimate surrounding.

There is nothing novel about this. In fact, there was nothing really novel about the concert at all from this past summer at Gillete Stadium in Foxboro, Massachusetts. There were huge plumes of flames during Bad Blood, shredding guitar solo as the outro to Shake It Off, a giant serpent rises as she screams “Bad Dreams!” on Look What You Made Me Do and there are carriages to whisk Taylor high above the audience to multiple stages throughout the stadium. Did I describe a KISS concert? Short of drooling blood, Taylor Swift made Paul Stanley & Gene Simmons proud.

I have had the luxury of seeing KISS twice in my life both at the Xfinity Center in Mansfield, Massachusetts (~14,000 seat outdoor venue). There is nobody better than Paul Stanley and making those connections with the crowd. I remember laughing as Stanley was hocking the latest album reminding us that he too was a member of the KISS Army. My absolute favorite part of those shows was the belief that EVERYONE at a KISS show deserved a front row seat. He jetlined out on a small stage in the middle of the arena and there he was standing right before me! So when Taylor Swift soared in a golden carriage during “Delicate” descending onto a smaller stage in the middle-right of the stadium to do four or so songs in a new area of the arena I realized her genius. She was going to use every square foot of the real estate afforded to her. She believed that everyone in the stadium deserved a front row seat and everyone deserved to be acknowledged (including the food concession staff, her gratitude towards everyone that contributed to the show was exceptionally nice).

Just as Paul Stanley asked “If he could have a Rock ‘n’ Roll Party with us?”, Taylor noted that the left hand side of stadium seemed like they were having a lot of fun and she posited the question “Do you mind if I check that out?”. She actually took a nice stroll across among the throngs of her fans taking the time to high-five all these screaming and crying girls who couldn’t believe how lucky they were to be so close to touch their hero. After doing another short set on this stage, a Golden Snake Carriage picked her up while a very heavy, and dare I say metal, version of “Bad Blood” blasted and at that moment she passed right in front of me in the air.

Now this is when, I say, going into the concert, I was not a diehard Taylor Swift fan. I was a casual fan that enjoyed the singles. I checked out the setlist the day after and I only knew half the songs she played. Even when an unknown song played, there was so much going on whether it was acrobatics, dancing, the costumes or a light show there was always something to entertain. It was a very fast two hours. As I watched her soar above me with huge fireballs shooting out from the top of the stage feeling the heat on my arms, I became a true, blue Taylor Swift fan because she was keeping alive the genre I love, Arena Rock.

Arena Rock is not a sound to me per se. It is a visual genre. It is about size and scale. It is about shock and awe. It is about pomp and circumstance.  Taylor Swift demonstrated herself to be a true veteran of the game, a ring master of a sublime circus. As KISS was to boys in the 1970s so is Taylor Swift to girls in the 2010s. It is very obvious why these girls look up to and love Taylor Swift, but you do not have to be a teenage girl to appreciate the amazing entertainer she is. Anyone who loves a spectacle will find themselves in awe of this show. To me more important than the sights and sounds, is the feelings that Arena Rock and Taylor Swift can inspire.

Most importantly, it is using these audiovisual tools to connect a massive amount of people together. Taylor Swift gave a small speech discussing the desire for human connection. You can see how she cherishes her connections with each of her fans by the way she talks about them. Before a beautiful piano ballad, she declared “I wrote this song with you [fans] in mind”. What made this special is even though she was dedicating the song to every fan in the building, the way she spoke it made you believe she was using “you the singular version”. It was a moment of intense intimate connection in a massive place. As I looked behind me, I saw two small girls crying tears of joy. Simply awesome.

Arena Rock still lives and breathes. It has evolved since the 1970s from The Who & Led Zeppelin to the shock rock of KISS & Alice Cooper to the party-hardy Glam Metal of the 1980s, but now it has taken the form of strong female figures like Lady Gaga and Katy Perry. In 2018, the person keeping Arena Rock alive is Taylor Swift. She understands the true beauty of Arena Rock the ability to create a spectacle for nearly hundred thousand people at a time while making an individual connection with each person in the audience.

It can still be as simple as a girl and her guitar leading 70,000 people in a sing along acoustic version of “22”. That’s Arena Rock. I saw her and she saw me.