Some hardcore gamers fancy speed runs. Others might do zero death runs. During the 16-bit era, I enjoyed performing no-shuriken runs in Shinobi III. I felt that this was much too difficult to accomplish in its predecessor, Revenge of Shinobi, because therein Joe lacked the moveset that he acquires in the sequel. Being able to manually block, run, and perform a diving kick facilitated retention of the POW power-up so that I could continue using powerfully fierce sword attacks throughout the game rather than the nominally effective daggers at close range.

Throughout my tenure here at PTBN, I have made numerous references to the fact that I’m a huge Tenchu fan in my writing. That series alone injected more (fantastic) realism to the myth and legend of ninja in digital media by emphasizing “stealth assassination” over the Musou-style that we have seen in Ninja Gaiden and TMNT. Mark of the Ninja blissfully blends the two styles  with more emphasis on the aesthetics of Tenchu  than Shinobi. For the former it is possible to sprint through stages but the noise that running generates provokes your unsuspecting prey, and they become attentive combatants. Sprinting across a 2D world propels me into a Shinobi nostalgic escapade, but the similarities between MotN and the Shinobi games on the Genesis are in reality few, for this game emphasizes stealth. 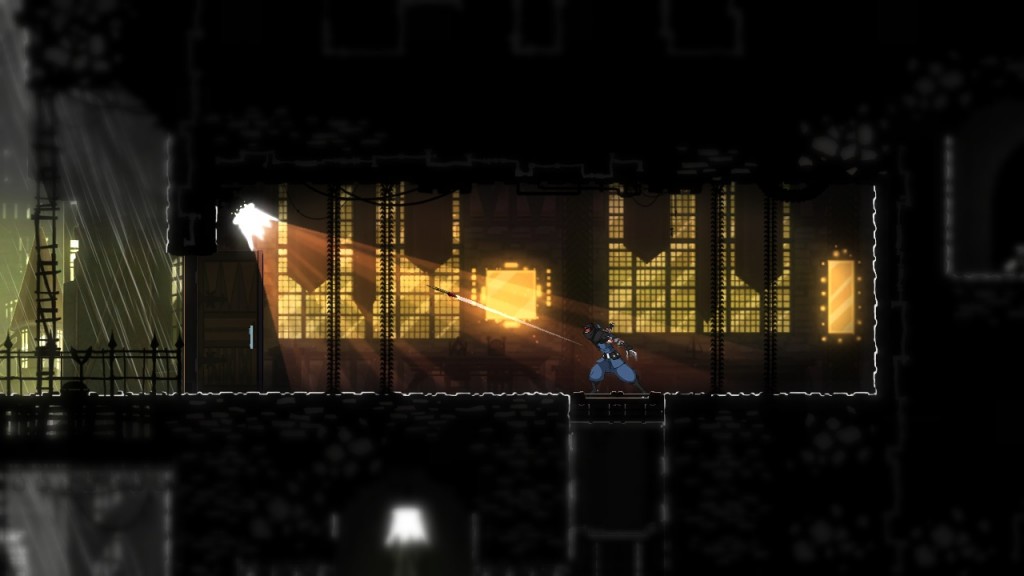 I thought I had already purchased the DLC for Mark of the Ninja, but I definitely will when it goes on sale again so that I can 100% the game. I am also looking forward to the developer commentaries, because from what I can tell, Klei Entertainment has done its homework. Shuriken in the Shinobi games of the past are used to kill, while shuriken used by real-life ninja were tools of distraction. In MotN, the one of the most basic basic setups for a stealth kill (or evasion) consists of shattering the bulb from a light source, intentionally making noise so that a nearby guard will investigate while in the dark. This is when you make your move to assassinate or flee. Shuriken are available in every stage, while players may choose among an exclusive arsenal of lethal and non-lethal weapons, from firecrackers to flash and smoke grenades for non-lethal weaponry to poison darts and human traps for the lethal stuff. All of these get points for being historically accurate, but like Tenchu, there are some fantastic-realist tools too, such as the flesh-eating bugs and the costume and tattoo sets which enhance your abilities at the cost of others. While all of this real ninja stuff is cool, it’s the “magical” that tends to distinguish these ninja games, and this is no different for MotN. 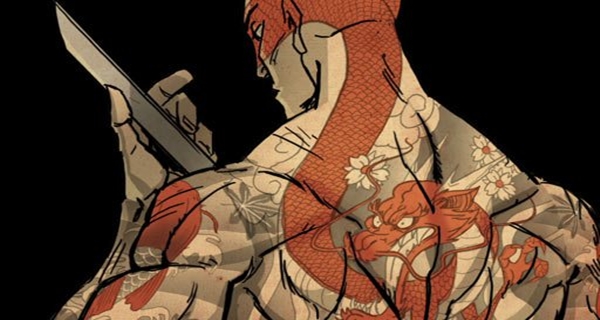 Man with the Dragon Tatoo

The Marked One—what I will  I will call the nameless protagonist and player-character—awakens at the beginning of the game to the uproar of an attack on his Hisomu clan after dreaming of a ninja who infiltrates a seemingly impregnably secure instillation to steal an unknown something contained within a steel box. If I am interpreting the deftly-integrated, cleverly hidden haikus that can be collected throughout the game which narrate the backstory to the plot, this initial sequence is no dream, but a demonstration of omniscience as a symptom of the toxic ink—cultivated from a certain endemic desert flower—used for the irezumi tattoos of the Marked One. I only say this after completing the entire game; we are reminded throughout MotN that the Marked One will descend into madness with hallucinations being a manifestation of the toxins consuming his mind, which is why whomever undertakes the mark for the sake of the HIsomu clan must commit suicide after completing his mission, less he succumb to the kind of bloodlust that destroyed Otomo the Hungry . However, we also discover that Azai is both a liar and a thief whose failure to protect the desert flower that is the lifeblood of the clan results in him deceiving the clan into taking the non-traditional path of technology to survive.We are told this from the beginning when a merc says “You think you can steal from us?” before striking him, and the end-level cutscene when Azai sends the Marked One for “revenge.”

I am convinced that the ink also bestows upon the Marked One uncanny intuition beyond what Hisomu clan training would develop. The farsight ability that is unlocked during the second half of the game (or at least I did not notice that I had it for the entire game; I know that the game begins with focus, which is ironic given the hallucinations later)with the default costume is obvious; however I am concerned with how in Klei’s design of this side-scrolling 2d game, the player does not have access to a comprehensive view of everything on the stage, but cannot see through walls or above or below surfaces without actively scouting. The Marked One cannot see enemies unless he is in the same room with them while hiding in plain sight—that is, simply standing out in the open but outside of any light sources and enemies’ field of view—or is peeking through the keyhole of a door or a  ventilation grate. Even in the darkness the Marked One can “sense” the presence of others via the shadowy silhouettes of his prey and the directional cones representing their fields of view. This expressly registers when the stalkers—members of the Hisomu clan who are using the stolen technology to hunt the Marked One—appear, and the Marked One can “sense” them, but cannot be discovered himself unless he encroaches upon the neon-green circular “detection” area. I would like to believe that these elements are an expression of the powers the ink grants through game design—not just Path of Serenity (or short teleportation Nightcrawler style without the sulfur smell); even if Klei was not that deliberate in MotN’s development,, all of this is still marvelous design even if the story elements are not completely congealed with the gameplay.

Stalkers. or ninja who can barely see further than regular mercs

Of course, New Game Plus removes the player’s ability to see enemies’ field of view, and the Marked One can only see enemies in the direction that he is facing, but I do not think that this negates the idea that the ink serves more as a sensory enhancer than inhibitor. 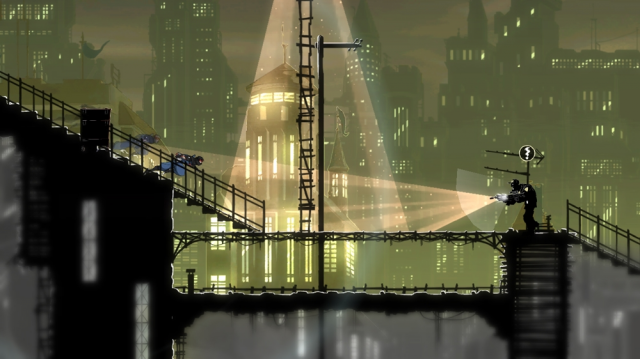 The way that stealth works and is effectively illustrated to the player is commendable, such as how the Marked One is completely black when he is “invisible” and the colors of his clothes/tattoos are revealed while he is exposed, usually in light

YOU KNOW I’M GOING TO TALK ABOUT THE ENDING LIKE I ALWAYS DO, RIGHT? YOU HAVE BEEN WARNED!

The ending to MotN is what I want to address most. As the scrolls collected narrating the history of the Hisomu clan dictate, the One Who Bears the Mark is to complete his/her mission and commit seppuku, s/he be driven into insanity. Well, as I have already mentioned, the “big reveal” is that Azai uses the last of the clan’s lifeblood to secure a new age for the Hisomu clan, one of lightweight armor, night vision, proximity detectors, and energy-based projectiles. Ora, the game’s persistent escort, accuses Azai of dishonor, and I understood her position given what is revealed (or if you are paying attention, what we knew all along) concerning his  dishonesty and dare I say treachery. But then she claims that the other clan members bowing to the Marked One do so as an expression of shame rather than respect for a mission being accomplished, and that the clan must be clensed/purged! I was thenceforth floored I became floored by the Grand Scheme MotN, but only after the end sequence where the Marked One must decide between seppuku or assassinating Azai. I naturally chose Azai, which resulted in a sequence so swift, that I was both confused and disappointed. I reloaded the game and endured the clichéd Long Walk once again and choose Ora. In this much longer sequence, the Marked One kneels against Ora but facing toward Azai and stabs both her and himself Yoshimitsu-style. Ora does not die, but is instead dispelled, and she flies away in specter-like fashion similar to how the Marked One does when he kills Azai, except when the Marked One flies away, his shadow looks like the Tetsuji terror of legend. Therefore, when Ora says at very beginning of the game, “Don’t get me killed,” she really means “Don’t get yourself killed,” because she is an apparition, the ultimate hallucination as a side-effect of flower toxins, and the end of the Marked One’s life means the end of her own. Why else would she suggest that the entire clan needs to die because of one man’s deceitfulness?  Why else would Azai ask the Marked One “Who are you listening to,” during the final confrontation as Ora berates Azai? Throughout the game, the Marked One satiates the ink/Ora’s/his own desire for violence as there are plenty of generic mercs to kill, so the player is not necessarily in danger of, or implicated in, playing with a Kratos-like character. Or are we? This idea of a ninja killing for entertainment rather than duty is what we are left with in Rikimaru’s ending to Tenchu: Stealth Assassins on the Wii, and is apparently (because I have yet to play it) a thematic concern in Ninja Gaiden 3.

Nevertheless, In the final acts of the game, Ora asks the Marked One if he “will be ready” to kill members of his own clan. He consciously does not flinch. Naturally, the task of killing his brothers and sisters becomes significantly easier because he hallucinates that they are mercs. The flower toxins is a feasible scapegoat for the butchery, as is Ora as a “guide,” but really, MotN conforms to the conventions of a Japanese tragedy, and Akira Kurosawa would be proud. As cool as ninja are in popular culture, they were historically low-class citizens where honor was therefore hard to come by, so they had little to lose in being trained from birth to become ninja (in feudal Japan, it was honorable to fight openly, and cowardly to use guerilla tactics). So it is only appropriate that whichever ending you choose, the Marked One is no hero, but he certainly leaves his mark as a legend. 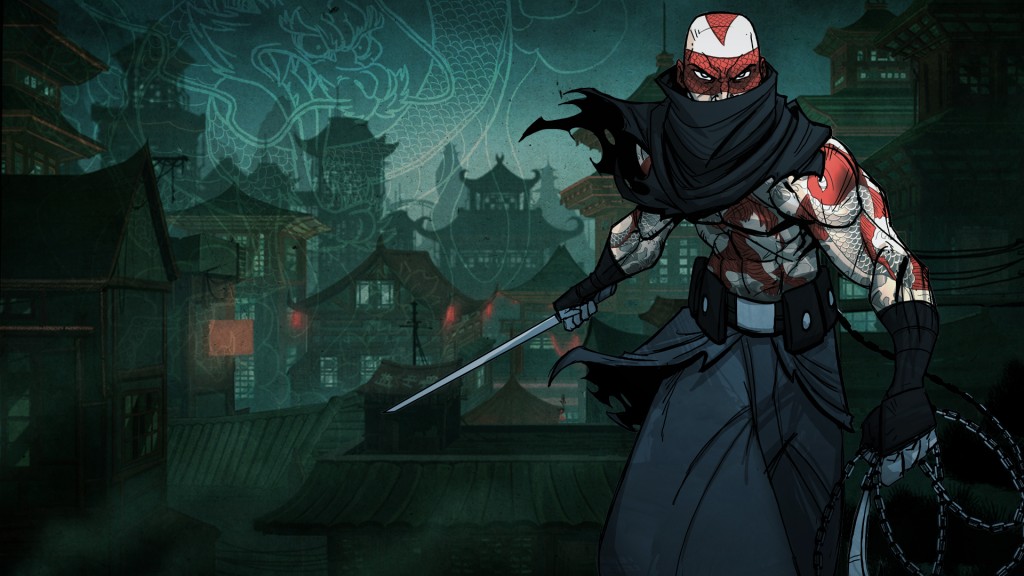