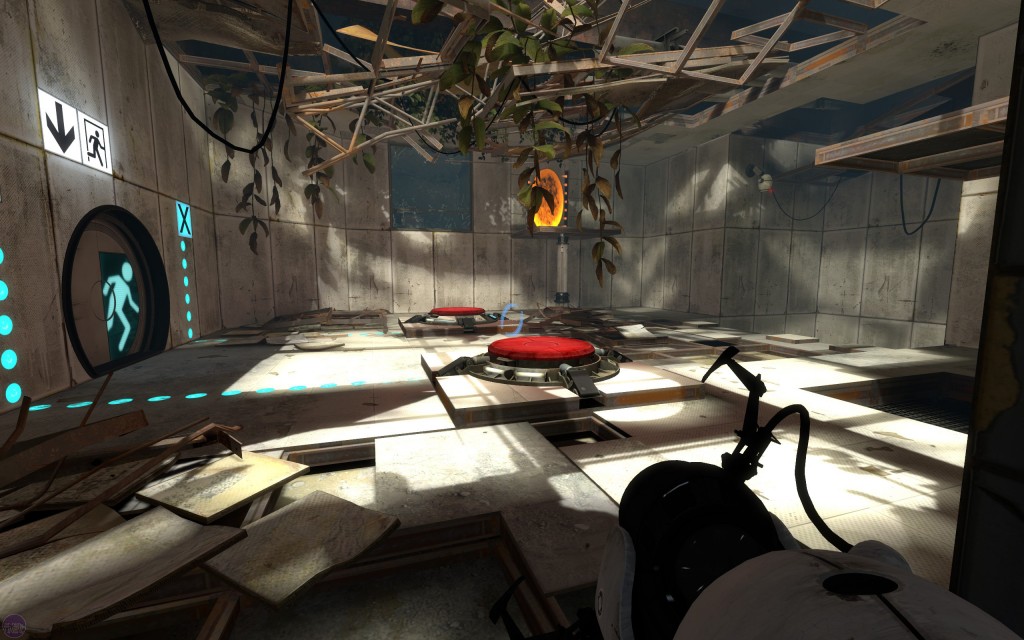 Portal 2 is a masterpiece, but most probably would not consider it a FPS. In fact, my personal standards of what a traditional FPS entails includes an inventory of weapons ranging through 1-0 on the keyboard.

Yet Halo is the first game that I remember which would limit the player’s arsenal to two weapons. Fans of games featuring similar weapon limitations such CoD would justify this radical deviation with claims that a 2-weapon “holster” adds realism and balance (for multiplayer), when in truth, these changes were made for the purpose of streamlining FPS for consoles. In other words, the FPS, which already required little mental acuity, was further hamstrung.

Alternatively, with Goldeneye for the N64 being the one true great console FPS before Halo, there would not be much for modern console gamers to compare their experiences, so they would never feel “cheated.” I honestly do believe that had developers tried limiting gamers to two weapons in PC FPS games, such a change would have been met with resistance. After all, a two-weapons system is one of the many great criticisms of Duke Nukem Forever, since its predecessor Duke 3D featured the traditional 1-0 weapons spread. As it stands, Bungee struck gold with Halo, and Infinity Ward would do the same with Call of Duty 4: Modern Warfare, one of the most important games of the past generation

Valve would make things even “simpler” by reducing the number of weapons available to the player at any given time from two to one—and I’m not even talking about the portal gun, as cool as it is. On the contrary, I’m talking about the most powerful, deadliest and arguably most brilliant creation: the human brain. That’s right! Valve forgoes the traditional foes of generic super soldiers, alien invasions, or robot armies and instead challenges players with puzzle rooms that may not be as deadly as Jigsaw’s, but they would still make him proud.

So let’s run down the other merits of Portal 2 as a FPS. Undoubtedly, we can continue from the acronym  itself with “first person.”

Check! Yep, this game passes that test, alright. Chelle makes her return as the mute player character…kinda sorta. In the marketing for the game, it would appear that she had discovered Michael Jackson’s plastic surgery specialist. Valve’s reasoning for some of the things that they do are above the gaming industry’s reproach, though Chelle’s makeover is a peculiar move since Chelle isn’t readily visible. My initial thought is that Valve was regressing to impossible standards of beauty by making Chelle lighter and neutralizing her more distinguished features, but then Valve also provided us with Rochelle in L4D2, the first unquestionably black female playable character in video game history who is not simply a reskin of a staple character such as Jade from Mortal Kombat. Meawihle, Sheva Alomar presents a set of complications such as being African rather than “black” as per American lexicon, and her existence is contingent upon her status as a sidekick to Chris Redfield–but still, it’s progress.

Next is the shooting aspect. Of course, the portal gun provides a way for the player to shoot even though the targets consist of broad surfaces rather than people. It’s not so difficult to accept as a viable alternative to the kind of shooting which results in gibs if one thinks in terms of paintball or laser tag where one might shoot or “tag” a base for more points than any number of people hit.

And that’s it. Pretty simple, huh? Yeah, the premise of the FPS is quite basic which is why it gained such popularity–or notoriety if you are Fox News or Jack Thompson–in the States, where we enjoy other doltish means of entertainment such as (reality) television.

Could my way of approaching the FPS give way for a game like Deus Ex? Sure, why not? What about another first-person game like Gone Home? Nope! Need some targets and a weapon to shoot!

Actually, it might be more intellectually rigorous and rewarding to explore”puzzle game” rather than “shooter” since one would naturally be inclined to describe Portal 2 as such without there being concrete defining characteristics of a “puzzle game” or even many console-based puzzle games in circulation. In terms of non-indie console games, only Catherine comes to mind, but perhaps there were others? Regardless, we are used to “solving puzzles” in adventure games such as Uncharted or (old school) Tomb Raider, or even figuring out how to get that  gold star coin in platform games such as Super Mario Bros Wii U. But there are only a handful of games in mainstream gaming that are completely devoted to puzzles. Anyone remember Intelligent Cube? Yeah, we don’t get much of that these days. So Portal 2 is doubly unique as a FPS and “puzzle game” because it requires players to generate and/or utilize projectiles while sometimes avoiding said activated contraptions in order to advance. The infamous drones shoot shoot at you, while you might “shoot” yourself. It is a pleasant experience with Portal 2 training you how to be more creative than…well…this:

That commercial isn’t even satire. Mercenaries is a game that inspired the likes of Just Cause, which as its namesake indicates, the “metagame” is to do things “just because.”

I guess I’m just one of those gamers who would like something different, refreshing, and more often. Portal 2 provides that.

It also helps that I get to puff up my chest a bit because I managed to solve every puzzle in Portal 2 without the use of the interent.