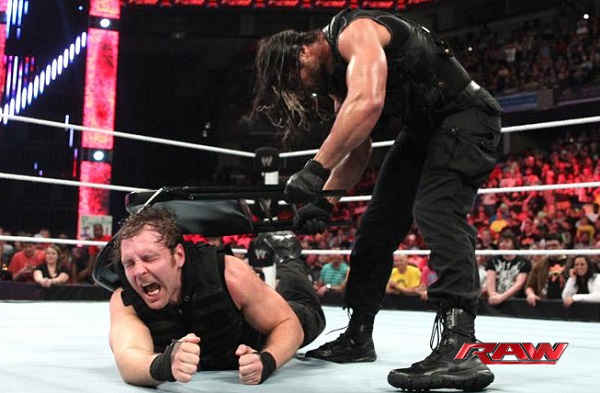 The specific moment may have been a shock, but we can’t say we didn’t see this one coming. We shouldn’t, at least.

Even if one was foolish enough to not heed Triple H’s ominous warning at the beginning of the June 2 Raw, the breakup of The Shield has arguably been imminent for months. But that didn’t make Seth Rollins’ betrayal of Roman Reigns and Dean Ambrose any less disheartening for those who had become emotionally invested in the trio as main event babyfaces in recent months. This group of people, of course, would basically be the entire WWE-watching populace.

The breakup was teased as far back as before WrestleMania when they were still heels, with Ambrose seemingly carrying himself above the other two, with Reigns and Rollins questioning him about having better places to be; with Rollins walking out mid-match, the so-called “architect” of the group tired of trying to keep the peace; and though it was never on-the-nose, there of course were subtle allusions to Reigns being the chosen one and ensuing jealousy (specifically from Ambrose).

But of course, whether we should have seen it coming and whether we wanted to see it happen are two very different things. Rumors persisted that the breakup was going to happen at WrestleMania (something I still thought was happening after their lightning-quick squash of Kane and the New Age Outlaws, a thought that didn’t pass until the segment was totally over). So maybe we should be thankful for the few months of awesome Shield babyface-dom we did get, if the original plans in fact never had us getting it at all.

The Evolution/Shield storyline has been the co-highlight of 2014 so far along with Daniel Bryan’s ascension to, and triumph in, the WrestleMania main event. (Which brings up a compelling aside given the common thread: would the internet explode if I wrote an article making the case for Triple H as WWE Superstar of the Year at the halfway point of 2014? I don’t make sport out of antagonizing smarks since I guess I nominally am one; it wouldn’t be a devil’s advocate argument. I just think it’s true.)

But while the three months of feuding with the Authority/Evolution hasn’t seemed to drag the way, say, Cena v. Wyatt has (did? I hope so) because it’s been so well-booked and given us two classic matches and countless fantastic Raw segments, what else was there to do here? What was left for The Shield to do as a unit?

Ultimately, those questions matter less than this one simple truth: no one wanted to see them break up. Even if there was nothing on the immediate, obvious horizon for them, at least part of any wrestling fan should want to scream, “I don’t care! It’s your best babyface act with Daniel Bryan currently on the shelf! Find them some asses to kick and we’ll figure out why later!”

Whether it manifests itself as the dastardly heel reigning supreme or a beloved babyface turning on his buddies (or the more modern version of the heels trolling us by playing off real-life stuff to the point where we think we’ll never see the hero triumph), wrestling’s great moments don’t happen without us seeing a moment or series of moments that are unsatisfying at best and wholly disheartening at worst.

The well-worn jokes about the WWE “telling stories” and “letting it play out” aside, it’s too early to care about Rollins’ motivation for turning heel; if there wasn’t an obviously specific one, is it something we need to have immediately processed for us? Rollins telling us- and depending on when this gets posted either consider this a spoiler alert or very old news- that we don’t deserve an explanation is probably fine and well enough for right now. To paraphrase an old Mitch Heberg joke, either the reason will be really good, or it’ll suck. Or it’ll just be OK.

But that doesn’t matter yet.

Even if WWE creative had built some main event storyline goodwill with Bryan’s Mania ascension, it’s hard to take too much solace in awaiting an eventual payoff to this storyline. Why should it right now? Whatever the payoff may be, it’s currently hard to see past the fact that it’s a storyline we didn’t want to begin with. I don’t want to see Reigns and/or Ambrose gaining vengeance on the treacherous Rollins the way I wanted to see Daniel Bryan take down the entire Authority by himself. I don’t want to see them fight at all. I still want to see them kick the shit out of everyone else.

Maybe this is the way being a wrestling fan as an adult is most like a sports fan. If you’ve made the conscious decision to be this big of a wrestling fan, you’ve accepted that it’s capable of taking an emotional toll. Not nearly the toll as seeing your favorite team lose a game, because we’re reasonably, semi-rational adult-type people who aren’t going to let the outcome of a wrestling match make or break your day.

But like the Undertaker once told Shawn Michaels, sometimes you gotta go through hell to get to heaven.

And I can’t think of a better way to describe the cognitive dissonance of being a wrestling fan. What’s so fake about it if it’s capable of eliciting real emotion? Just like being a diehard fan of a team in real sports, you accept you’re going get kicked in the nuts a bunch of times for just a chance of euphoria.

Besides, as hard as it is to watch the end of a trio that became beloved as soon as we had the slightest reason to like them, is it better to quit while you’re ahead or outstay your welcome? The Shield got 18 months near, and often at, the very top of the card against the biggest stars in the business from the moment they debuted. In a company where the likes of Dolph Ziggler, Sheamus and Kofi Kingston can be healthy scratches on pay-per-views (or is it “special events”? Have they decided yet?), that’s an eternity.

It seemed as if maybe The Shield had reached that rarefied air to where their act could be a real draw, even more rarefied air for a babyface stable. Maybe they’d eventually grow stale, but wasn’t there a lot more time before that point?

On the other hand, maybe the timing is perfect to launch all three of them into the stratosphere individually. Ambrose, Reigns and Rollins have all long been earmarked for future main event status anyway; it just wasn’t necessarily thought they’d all get there at the same time when they broke up. That now seems possible.

Finding that sweet spot is hard. If you have a fail-safe formula on how to find it, I have a stock price you can possibly help re-inflate. Much like the valuation of Vince McMahon’s company, simply being a wrestling fan is often an exercise in accepting that reaching dizzying emotional highs often requires plunging into some terrifying lows.