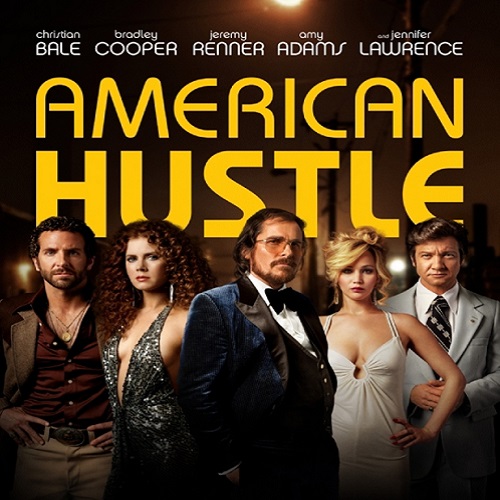 Time to Make the Big Play

American Hustle has garnered so much praise and I wanted to go in with a very clear mind when seeing this ensemble cast tell this halfway true tale. At the time of this review, American Hustle had won numerous awards including the Golden Globe for Best Motion Picture – Musical or Comedy. Additionally, Amy Adams and Jennifer Lawrence won best Actress and Supporting Actress in a Musical and Comedy. After watching the film, I don’t quite know if I would categorize this movie as a comedy, but damn was there a lot of energy. The film has also been nominated for numerous Academy Awards including Best Picture, Director, Actor, Actress, Supporting Actor, Supporting Actress, Best Writing, Original Screenplay, Editing, Costume Design, and Production Design.

That’s quite the resume, especially when you look at the cast. Some of the players in this film include Christian Bale (Irving Rosenfeld), Bradley Cooper (Richard “Richie” DiMaso), Amy Adams (Sydney Prosser), Jeremy Renner (Mayor Carmine Polito) and Jennifer Lawrence (Rosalyn Rosenfeld). These are the players and the game is something to behold!

First off, Christian Bale has really transformed into a powerhouse on the screen. He lives and breaths the roles that he is in and with Hustle, he brings Irving Rosenfeld to life and makes you feel the hell of a life he’s going through. His inner dialogue gives a glimpse into this darkness, but he is a hustler and he lets everyone know how much he can be “trusted.” Amy Adams portrayal of Sydney Prosser is also quite good. She is a huge piece of the energy and helps kick things into gear early with the arrival of Lady Edith Greensly. That energy builds and leads to the first big turn, as things continue to cook.

Jennifer Lawrence plays Rosenfeld’s wife Rosalyn. She is without a doubt something to behold in this film and has the characteristic of “foxy.” The film completely engulfs itself in the 1970s and Adams and Lawrence both show the fashion and attitude of the era. Bradley Cooper’s perm is a sight to be seen along with Bale’s comb over, but Renner’s pompadour is incredible! The fashion is in full swing and the costumes are just a small piece of the puzzle. The accents that each of the actors speaks meanwhile, are comedic at some points but really drive the point home. In addition, the music of the film is also noteworthy and provides some meat and potatoes to some scenes while reinforcing underlying tones.

One of the interesting pieces of the film is the inner-dialogue of Bale, Cooper, and Adams. Each character gives an insight into the screwed up nature of his and herself. The inner turmoil of these individuals drives the film forward and each twist and turn keeps the film progressing in a way that makes you contemplate who is going to hustle whom next. The tempo has its highs and lows throughout and there are some parts that don’t sit as well with me. One of them being Amy Adam’s accent. If anything, it does add the comedic value, but in reality, it becomes annoying as she constantly flips back and forth. She is playing a major hustle and at some points seems to lose track of who she “actually” is bouncing between Sydney Prosser and Edith Greensly. American Hustle makes up for that misguided attempt by bringing in Robert DeNiro who provides a notable cameo that adds some real legitimacy to the entire film.

I am a huge fan of films based on cons and hustles. Paul Newman’s Hustler, The Color of Money, The Sting, the Ocean’s Trilogy and Catch Me If You Can are among my list of favorite films. American Hustle is without a doubt a fun 130-minute ride into this true to life story that has some added elements for entertainment. When the big con pays off, you have a nice sense of “how’s that shit-burger taste?” Thank you Lou Brown! As the big play con comes to light, you find yourself playing through the film over and over again in your head to try and find the clues and aspects you may have missed.

The performances by the big five and the cameo of Robert DeNiro all make this film something special. It is without a doubt the best-acted film in terms of an ensemble, but I still didn’t walk away from it with the overwhelming excitement and feeling of being entertained that I did from the Wolf of Wall Street. I know Amy Adams and Jennifer Lawrence both have a shot at walking away with gold trophies on March 1st, but Christian Bale is really the belle of the ball in this film. You see this man’s ascension from the lowest of lows to the highest of highs. You see the pit of his love and his hatred and it boils over multiple time during the film. As a whole, this movie has been a commercial success and without a doubt will continue to get some major love when the award’s season is all said and done. I ranked this film number 4 on the top 20 films I saw released in 2013.

Thank you for joining me for this review of American Hustler – Time to make the big play. Please stay tuned to the Place to Be Nation for more movie reviews and also my look at the nominees for this year’s Academy Awards. If there is a film you’d like to see me review, please let me know. Here’s to 2014 and the movies!