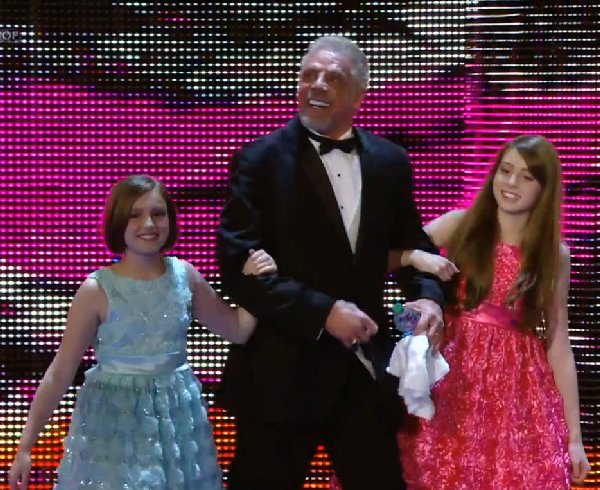 A shockwave is reverberating through the wrestling world today, with the sudden and completely unexpected news of the Ultimate Warrior’s death. There is not much solid information yet (at the time of writing, WWE.com only says that he has indeed died), but TMZ says officials have confirmed that he collapsed at his hotel in Arizona Tuesday afternoon and was pronounced dead at a nearby hospital.

After years of legal strife and erratic public behavior, Warrior had only just reconstructed his last burnt bridge by headlining this year’s class of the WWE Hall of Fame. The bad blood between Warrior and the company first spilled out in 1991, when Warrior objected to what he saw as insufficient compensation for SummerSlam and Vince McMahon fired him for allegedly holding out for more money. He would return within eight months, only to leave again within another eight. Another short stint in the WWF in 1996 was followed by lawsuits over the rights to the gimmick, leading Jim Hellwig to legally change his name to Warrior (just Warrior, like Madonna and Sinbad) in but one of his oft-ridiculed public moves. Many things about the Warrior were never ridiculed in such a high-profile manner as the WWE Home Video release The Self-Destruction of the Ultimate Warrior, a DVD production made in 2005 that exposed much of the business & legal strife between Warrior and WWF, and featured extensive mockery of all aspects of the Ultimate Warrior’s career and gimmick. This of course spurred another lawsuit and, by all indications from Warrior, genuinely hurt him.

(Incidentally, Ultimate Warrior’s promos, interviews and monologues have long had an undeservedly poor reputation, particularly for being “incoherent” or some such. One thing that made the man’s promos so distinctive, aside from his white-knuckled charisma, was his use of expressive metaphors. He took promos to places they shall never have been.)

For a summary of parts of Warrior’s career, the man himself did a good job of it in his Hall of Fame speech. He was as outspoken as ever about some issues that had particularly frustrated him, but spoke from the heart about many people who helped him achieve the success he did. Remembering him now, we might do better to highlight what was most memorable about him.

Picture it: Madison Square Garden, 1988, the first ever SummerSlam. The Honky Tonk Man has ruled the Intercontinental Title scene for seemingly forever. Many feuds have come and gone, including a short but very memorable one with current World Champion Randy Savage, yet The Honky Tonk Man has remained constant as the northern star. Flush with arrogance and bravado, the champion lays down a challenge to anyone who might wish to face him. Suddenly, Ultimate Warrior’s iconic music hits, and before thirty seconds have passed Honky Tonk is sent packing.

Picture it: 1990. The Ultimate Warrior has become monstrously popular during his two Intercontinental Championship reigns. He dismisses challengers left and right. At the Royal Rumble, one rampaging beast locks horns with another as Warrior and World Champion Hulk Hogan come into contact. As the following months go by, neither man shrinks when confronted by the other, and the seeds are sewn for The Ultimate Challenge at WrestleMania VI in Toronto, a main event that would not be matched in terms of intensity and spectacle for eleven WrestleManias…and in the opinions of some never has been matched. Warrior wins the match and the World Title, scoring the first pinfall loss on Hulk Hogan in, as far as WWF continuity of the time is concerned, recorded history. He holds the Heavyweight and Intercontinental Championships simultaneously. For a time, and there are those who debate to this day precisely why the time was limited, Warrior rules the world of the WWF.

Picture it: 1991. The rage and jealousy of Macho King Randy Savage has ended Ultimate Warrior’s WWF Championship reign, and the Warrior must have his revenge. At one point, when things seem most dire, the Ultimate Warrior questions his gods, wondering if retirement may indeed be his destiny, but they reassure him. The result is a retirement match that truly earns its reputation as an epic, an all-time WrestleMania highlight, and a career highlight for both men.