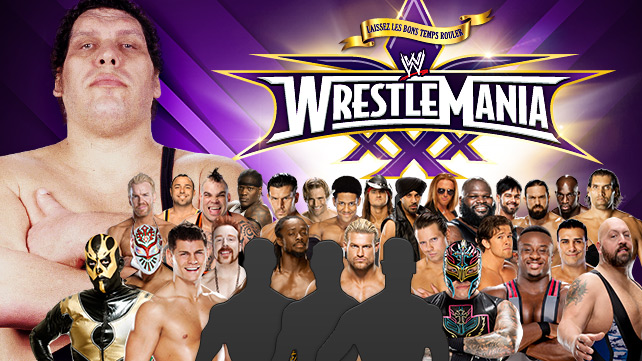 So the WWE has decided that one of the big salutes in the tradition of WrestleMania is to have an old-fashioned, 30-Man, over the top rope Battle Royal. Now, while this gimmick does have a history with the event, there have been gimmicks with much more importance used over the years. The first one that comes to mind is the Money in the Bank Ladder Match, which has since been moved to its own branded PPV. Of course WrestleMania would see the very first Tables, Ladders and Chairs match that also has seen spun-off to a separate branded PPV event.  Oddly enough, and despite the gimmick being as much of a staple in the business as the Battle Royal, in the 29 previous WrestleManias, there have only been three bouts that involved cages, two of which being Hell in a Cell matches. What is even odder is that neither neither Cell match was the actual final match on the card.

Still, the Battle Royal has been a good staple for pleasing crowds and getting a lot of the boys a big payday. While its history at WrestleMania has been sparse and mostly used as part of whatever form the pre-show event had that particular year, there is still enough of a history and tradition in the gimmick to justify a special version of it on the 30th WrestleMania.  Especially when putting the name of the late, great Andre the Giant on it.

The first Mania Battle Royal was a 20-Man one at the second ever WrestleMania, which served as the Main Event of the Rosemont Horizon portion of the show.  It featured 14 wrestlers and an interesting cross-section of the previous era with three former World Champions in The Iron Sheik, Pedro Morales and Bruno Sammartino. In addition, we saw guys who were part of the 1980s boom like the Hart Foundation, The Killer Bees and Haku (under his King Tonga gimmick).  Also in the match were six NFL stars, the biggest in terms of pop culture notoriety being the Chicago Bears’ William “The Refrigerator” Perry. Perry had a bit of an angle with Big John Studd leading into the match that would play out during the show.

Andre the Giant would pick up the win here with Bret Hart being the final man eliminated. While far from having even a kernel of legitimacy to it, even up to that point (i.e. having a close to perfect winning percentage), Andre was in kayfabe terms “undefeated” in Battle Royals and so deserving of getting his name attached to this year’s Battle Royal. 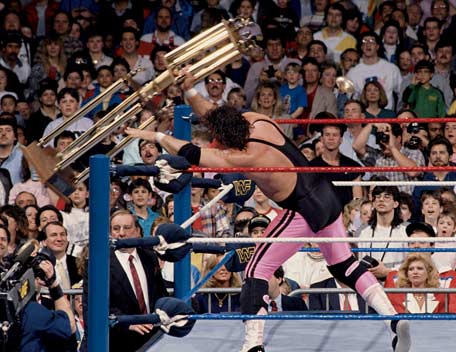 The next time the gimmick came around was for 1988 and WrestleMania IV.  This time with so much of the PPV dedicated to the World Title tournament (other than the tag and IC matches, there was one lone non-tournament match, and that was Bobby Hennan and the Islanders versus The Bulldogs and Koko B. Ware).  Again a 20-Man affair, though all wrestlers this time and Bret Hart for the second time was the final guy eliminated! This time by Bad News Brown. Oddly enough, while there were some mid-carders in the match, the lineup does include several complete tag teams, including the Rougeaus, Hart Foundation, Killer Bees and the Bolsheviks.

While Brown would pick up the win, the finish kept the spotlight on Hart melting down and destroying the trophy Brown had just won (could this happen this year with the Andre trophy that will be given to the winner?).  This was meant as part of developing Hart’s solo career, but the trigger on that wouldn’t be pulled just yet.

The Battle Royal gimmick would not be on a WrestleMania again until a decade later in 1998. This time as a 30-Man, 15-team Tag Team Battle Royal. The rules were that if one member of your team got tossed, that meant that the team was eliminated. It was for the Number One Contender for the Tag Team Titles, which would be contested at the next month’s PPV, Unforgiven.

In what would be the team’s final real moment of glory as originally constituted (though now known as LOD 2000), the Legion of Doom, Road Warrior Hawk and Road Warrior Animal picked up the win. While the teams in the match themselves revealed how dreadful the tag division had become as the 1990s were drawing to a close (also included two separate parings from the Nation of Domination), it was a nice spot for the LOD to stand on top of the mountain one more time. Unfortunately, they did end up jobbing to the champions, The New Age Outlaws, the next month in their title shot. 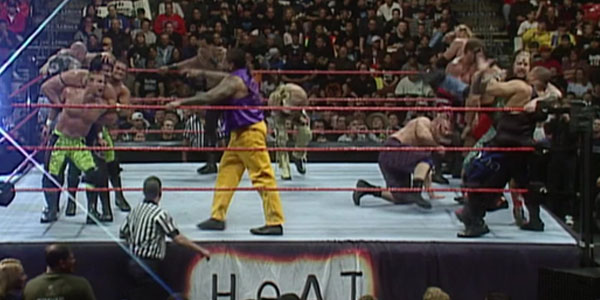 1999 would see the same tag team #1 contenders stipulation added to the match, but with several different wrinkles.  The first being that, even though it featured several complete teams, the last two competitors would be the team to face the Tag Team Champions later that night. It was a part of the pre-show at the time on the USA Network’s weekly Sunday Night Heat program.

The final two competitors would be D-Lo Brown and Test and in the second match of the PPV proper, the champions, Owen Hart and Jeff Jarrett, made quick work of them (3:58 to be exact from ProWrestlingHistory.com). Unfortunately, nothing really became of the pairing as they brawled following the match and both moved onto to other things afterwards.

In 2000, the Battle Royal gimmick returned to the PPV proper, though this time it was a Hardcore one. Think of it like a precursor to the Title Scramble matches at Unforgiven 2008. The Hardcore title, then held by Crash Holly, would get defended by pinfall or submission during the match against 12 competitors through a 15 minute time limit. The last person to gain a pinfall would be the Hardcore Champion. While none of the reigns are in the record books (which is odd considering how convoluted and crazy the title history would be through the rest of its history before being retired on 8/26/2002), the title would change hands 10 times, with the final being Bob Holly getting the pin on Crash as the time limit was a few seconds away.

It was probably one of the more fun Battle Royals in WrestleMania history, as it had a cool concept in the early days of the Hardcore Title’s 24/7 era. While seemingly cartoonish in light of what the general consensus of what hardcore wrestling is, it was still a good snapshot of how insane the Hardcore division was shortly before it would get completely out of hand. 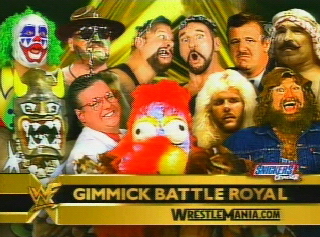 Speaking of campy goodness, 2001 would see the WWF start to bring in a nostalgic factor to its product with the Gimmick Battle Royal. While the fact that WrestleMania landed on April Fools Day may have had something to do with the concept (there was speculation that a “ringer” would take home the victory, especially after Chris Jericho posed as Doink before attacking William Regal on TV as part of the build up to their WrestleMania match), a 19-man Battle Royal that featured several gimmicks such as the Gobbledy Gooker, The Goon and Duke “The Dumpster” Droese as well as more regarded characters like Michael P.S. Hayes, Sgt. Slaughter, Earthquake and One Man Gang, was a fun addition to a great card.

Also a tremendous element was the WWF/E returns of Bobby “The Brain” Heenan and Mean Gene Okerlund, as they called the match.  The Iron Sheik would pick up the win, though he kind of had to since he couldn’t take an over-the-top bump. Of course, Slaughter would get some baby-face heat back by applying the Cobra Clutch to his longtime adversary after the match.Sadly no references were made to Sheik’s Col. Mustafa character that was part of Slaughter’s Iraqi sympathizer gimmick back in 1990-1991. 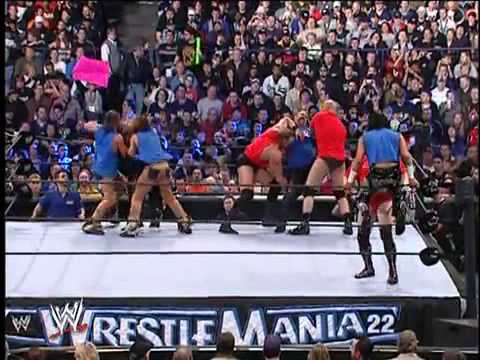 The gimmick would take another break but would return again as part of the pre-shows for both WrestleMania XXI and XXII.  Both were special “inter-brand” matches pitting Raw and Smackdown mid-carders against each other during the height of the Brand Split years.

Booker T would pick up the win in 2005 in a 30-Man Battle Royal, while Big Daddy V would get the win in an 18-Man bout the following year.

After a one year absence, the gimmick would return in 2008. While still part of the pre-show and shown exclusively on WWE.com, there was a stipulation added as the winner of the 24-Man Battle Royal would be facing the ECW Champion, Chavo Guerrero, Jr. later in the night.

Kane held on to win the match, and for the second time ever, a participant in a WrestleMania Battle Royal would pull off a double duty as Kane would defeat Guerrero for ECW Title at WM XXIV.

2009 would see a return to campiness as Santino Marella’s “sister” Santina Marella won a 25-Diva Battle Royal to be crowned the first, and so far only, Miss WrestleMania. He, I mean she, eliminated both Women’s Champion Melina and Beth Phoenix, whom Santino had a mix-tag team with that year.

The gimmick returned to the pre-show the following year with Yoshi Tatsu earning the win in a 26-Man Battle Royal at WM XXVI. 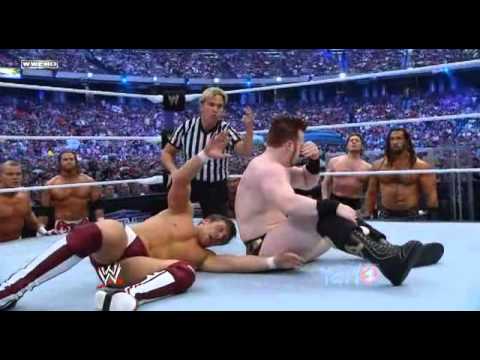 Finally on 2011’s pre-show, a Lumberjack Match with the US Heavyweight Champion Sheamus defending against Daniel Bryan erupted into chaos as Lumberjacks started brawling with the participants. This led to Smackdown GM Teddy Long to create an impromptu Battle Royal with Sheamus, Bryan and all 20 Lumberjacks with The Great Khali emerging victorious.

So now we have this year’s version, which is back in the PPV proper, but still filled with predominantly mid-card talent that simply aren’t booked for any other kind of match heading into the event.

Still, it should serve, as it usually has, as a good crowd pleaser. Who knows if a storyline or two will come out of the match to be a hot feud for the spring and/or summer.