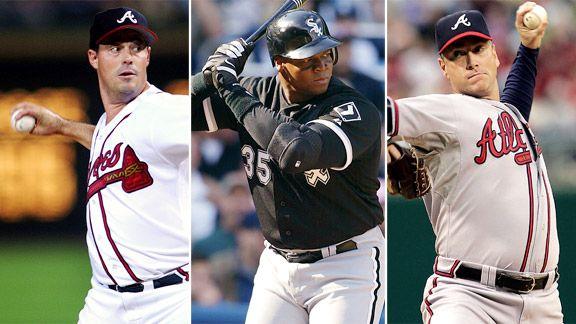 On January 8th the Baseball Writers’ Association of America announced that it had elected three former players to be inducted into the Hall of Fame this summer in Cooperstown, New York.  One of the great one-two punches a starting rotation could have in Greg Maddux and Tom Glavine  and longtime 1B/DH Frank Thomas.

On paper, there isn’t much to argue against any of these three.  Maddux was one of the most dominating winners of the 1990s and the 2000s. He tied Sandy Koufax for third for most Cy Young Awards with four in his career and finished eighth (most among living players) in all-time victories.  Glavine was one of the best of his day with over 300 wins, two Cy Young Awards and a World Series MVP.  Thomas won back-to-back MVPs in 1993 and 1994, had 521 home runs and for a stretch in the early 1990s was one of the “faces” of the game. He had his own Reebok branded “Big Hurt” shoes, video games and was a spokesperson for Upper Deck trading cards.  He even had a cameo in the movie Mr. Baseball as the rookie that forces the Yankees to send Tom Selleck’s character to Japan!

Suffice it to say, the writers got back on the ball and managed to put in players for the first time since Barry Larkin in 2012.  However, there is still much to discuss about the way things are in the ranks of the electorate.  The trio is in fact the first “first ballot Hall of Famers” since Rickey Henderson in 2009 to be elected. This indicates that the writers are nowhere closer to having a clear consensus on how to deal with PED usage during the 1990s and 2000s then they were during the fallout of; Jose Canseco’s book, BALCO, the Mitchell Report Investigation, the first wave of testing in the early 2000s that caused sweeping changes to how MLB was handling PEDs and the infamous Congressional hearings with the ensuing obstruction of justice trials of Barry Bonds and Roger Clemens started coming to a head.

It just so happens that these three players, for whatever reason, passed the writer’s “sniff test” or “eye test” or whatever test they used to vote for them. But not Jeff Bagwell, Mike Piazza or anyone that, at best, have anecdotal evidence, suspicious whispers and innuendo thrown at them. More to that point, the voters are making a case that Glavine, Maddux and Thomas didn’t at least benefit from teammates that used PEDs?

Also, at first glance, Glavine and Maddux don’t look like your stereotypical roided up athletes, even taking their “Chicks Dig the Long Ball” TV ad into account!  But pitchers have been just as guilty as hitters have when it comes to getting pinched by MLB.  This dispels this idea that you have to look like Brock Lesnar to be take PEDs, especially since there are PEDs used more for endurance than strength. Hell, Lance Armstrong looked more like a guy that would go toe-to-toe with CM Punk and not John Cena for example!  Not to mention, there have been situations where someone has been vehemently against something as Frank Thomas has been about PED usage but then it turns out they were secretly what they were so adamantly against.  This is of course in no way suggesting anything. It just seems that the voters have been treating players like Bagwell, Piazza and even Craig Biggo with the “well he played with cheaters like Ken Caminiti” approach. You can easily do the same with the players that they actually did vote in!

Nevermind the attention seeking sanctimonious declaration of the first voter to reveal that he wasn’t voting for Greg Maddux (whom fell just short of Tom Seaver’s all-time percent record of 98.8% with 97.2%), or anyone except for Jack Morris due to virtually everyone on the ballot playing during the “Steroid Era.”  Which of course is a silly assertion since, for one Morris (who failed to get elected on his 15th and final try, and is now eligible to be selected the next time the Veterans Committee on Expansion Era comes up to vote) last pitched in 1994.  So the delineation line is 1995 and forward?  Nevermind Canseco and Mark McGwire were The Bash Brothers in Oakland together from 1987-1992 and steroid whispers were around even back then.  But let’s think for a moment about what has come out through the years in terms of performance enhancing drugs. Generally they didn’t come to American professional team sports until the late 1960s-early 1970s.  Former pitcher Tom House even came out and said he was using the stuff back in the early 1970s!  Read any recent book on NFL football in the 1970s and they are filled with tales of PED abuse.

So save the sob stories and sanctimonious sermons about how PEDs were allowed to be prevalent in the game because the Mark McGwire-Sammy Sosa “Great Homerun Race” of 1998 “saved the game” after the 1994 strike.

To say nothing about the second idea that chances are the writers HAVE elected someone who had not only used PEDs, but did so long before the so-called delineation line of the 1994 strike.  Nevermind the fact that there is no clear evidence that the “steroid era” has even ended with the amount of players still getting hit with suspensions every year, and the current ongoing saga with Alex Rodriguez.

In any event, while the vote totals for Bonds, McGwire, Sosa, and Roger Clemens have gone down, and Rafael Palmerio has been effectively kicked off the ballot (and unless there is a major change, Palmerio isn’t even eligible to move on to the Veterans’ vote), there can be something to be said about Bagwell, Piazza and Biggio gaining momentum from past years. Granted there seemed like there was just as much craziness from the writers this year as there has been in recent years. It does seem some of the vitriol against those whom have never had documented evidence against them is subsiding.  So, who knows what will happen in the 2015 vote, when Randy Johnson, Pedro Martinez, John Smoltz, Gary Sheffield, Nomar Garciaparra and Carlos Delgado join the ballot? This could conceivably mean more fun with the logjam that already has existed since the start of this decade. 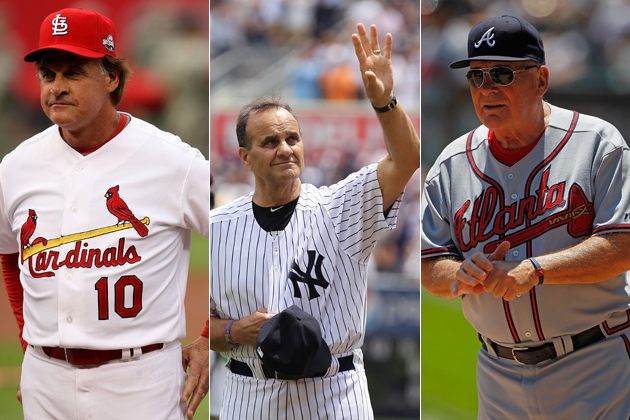 On December 9th, the Veterans Expansion Committee elected three of the greatest managers in modern times to the Hall of Fame; Bobby Cox, Tony LaRussa and Joe Torre.

The three represent the third (LaRussa 2,728), fourth (Cox 2,504) and fifth (Torre, 2,326) all-time winningest managers in the game’s history.  This trio, in addition to being in the top six in terms of years managed (LaRussa is tied with John McGraw with 33 years, and only Connie Mack with 53 managed longer), rank highly in career games managed and losses as well.  All three are  in the top 15 in all-times Games over .500, with Cox in third trailing McGraw and Joe McCarthy, and Cox is in the top 25 in all-time managing win/loss record (minimum 320 games according to Baseball-Reference.com).  Of course Torre has four World Championships, LaRussa three, and Cox with one, but all three have a boat load of postseason appearances and turns as All-Star Game manager. Finally, LaRussa and Cox are tied with the most Manager of the Year Awards with four apiece, while Torre was awarded two in his hall-of-fame career.

Three legendary managerial careers but it is a bit interesting that for the last few years, over at the “main entrance” of the Hall, there has been clouds of suspicions and writers getting on high horses when it comes to PED usage among players. Yet these three were elected by a committee composed of former players, executives and media members.

Cox less so in terms of outright documented cases, but look how many of Torre’s Yankees are on the Mitchell Report, have been suspended or have had their names tossed about!  Just take a look at the winners of all four Yankees wins in the 2000 World Series for example; Mike Stanton, Roger Clemens, Denny Neagle, and Andy Pettitte.  All four were named on the Mitchell report as PED users. And to top it all off, what was the “flash point” of the current PED discussion?  The publication of Jose Canseco’s book.  And where did Canseco debut and whom was managing his team?  The answers are the Oakland Athletics and Tony LaRussa.

This isn’t saying the three should not be put in. It is just that it seems odd that on one hand legacies and sanity of the game is being debated, but a harsh light is not put on three legendary skippers. Can we not ask “what did they know, and did they do anything about it” and should that take some luster off of their legacies?  Sure it is based on something that was rampant in the sport. But there is a bit of an inequity in a system where on one hand a topic is hotly debated to the point where mere suspicions, whispers and anecdotal evidence, can cause a player not to be voted in. Yet on another, with these managers, it gets largely forgotten.

And finally, it should be noted that the three Award recipients were also announced. Long time radio broadcaster with the Texas Rangers, Eric Nadel was named the Ford C. Frick Award winner for excellence in broadcasting.

The J.G. Taylor Spink Award for meritorious contributions to baseball writing went to Roger Angell.  Currently a senior editor for The New Yorker, Angell, despite never being a member of the BWAA and the first Spink winner not to be one, has written decades worth of classic and iconic pieces on baseball for The New Yorker.  Many of his stories have been collected in book form such as Late Innings: A Baseball Companion, Five Seasons which looks at baseball from 1972-1976, Season Ticket and The Summer Game.

Joe Garagiola was announced as the recipient of the Buck O’Neil Lifetime Achievement Award which salutes individuals who helped broaden the game’s appeal. Garagiola has been a long time ambassador of the game first as a broadcaster and television personality. In fact, a past recipient of the Frick Award himself and as founder of the Baseball Assistance Team (B.A.T) he helps give support to members of the baseball family in need.

The three awards will be presented during the Saturday presentations on July 26th, with Glavine, Maddux, Thomas, Cox, LaRussa and Torre getting enshrined the next day, Sunday, July 27th.