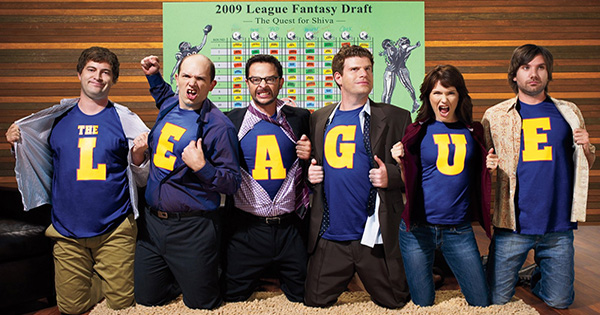 With FX branching out it’s growing brand and splitting into FXM (drama) and FXX (comedy), the flagship shows of the station reaped the benefits. One of those shows is The League, which was extended through season six shortly after the fourth installment wrapped up. Season five premiers on September 4 and it will open with a pretty major piece of storyline advancement.

Since the show debuted, Dr. Andre Nowzick has been the butt of all the jokes, the loser of the group and the one always doing anything he could for adoration within his stable of buddies. Heck, one time he even was on the verge of switching fantasy leagues when he found a group of guys that idolized him. Well, Andre has finally found his adoration, because the first pair of episodes this season will see Andre tie the knot. But first, we get the bachelor party, which of course will also encompass the league draft. The highlight of the premier will be seeing how the boys incorporate the draft into the festivities.

In episode two, Dre weds his girlfriend, Trixie and the stage is set for all sorts of mayhem. We will finally meet Dre’s parents and it has been well established in the past that things can never go easily for Dr. Nowzick, so things should get out of control fairly quickly.

And lest we forget, the ever-present Rafi, brother-in-law to Ruxin, who is sure to be involved in everything as well, being as fucked up and sex crazed as ever. I am sure he will be involved in both Andre’s wedding and the Dirty Randy adventure, plus more. Rafi has become a real breakout character since he first showed up at the start of season two.

Since The League premiered, the following competitors have won the Shiva: Andre, Ruxin, Kevin* and Ted. Of course, Kevin’s title is tainted, because the crew rigged the draft to screw Ruxin and as a result, he put a curse on the trophy, league and the season. Kevin got his championship reinstated after a trade with Ruxin led to a series of swaps that ended with Ruxin as commissioner and the newest MacArthur child being named “Chalupa Batman”.

I thought it was a nice touch to have Ted win last season, as at some point they needed to have an off screen league member take home the gold. At some point, Pete or Jenny have to win the Shiva. Pete has won three times before, all occurring as part of the backstory before the program began. Taco won as well back in the dark ages. Pete is clearly the glue of the group and the league, despite Kevin being in the commissioner role, so it makes sense to delay his win as long as possible. If I had to lay an sort of guess down on this, I am rolling with Jenny in season five. She is clearly one of the best players in the league and usually rolls out a top team. By the time this season wraps, Jenny MacArthur will be holding the Shiva high above her head.

Even if you aren’t a fan of fantasy football or even sports in general, The League still delivers bucket-fulls of laughs for you. The jokes are fast, the wit is quick and the humor is as dirty as you could ask for outside of premium cable. The acting is also improvised for the most part, which always adds to the realism of the performance, especially when the show centers around a group of friends busting balls and treating each other like shit. So, set your lineup, do the Shiva dance and set aside some time to join the greatest, most cutthroat League in the world today.