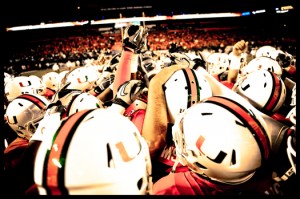 The Atlantic Division of the ACC feels very top heavy.  The Coastal this year feels like land the land of middle ground teams as numerous teams think they have a stake at the division title.  I can see the tiebreaker system be utilized in seeing who plays in the ACC championship. 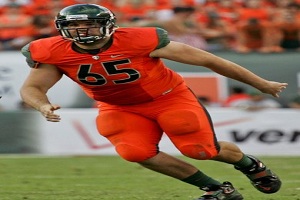 Player to Watch: RG Brandon Linder.  The Canes are featuring one of the best and most seasoned offensive lines in the country.  They averaged in the top 25 in most metrics last year and should only continue to improve.  Linder is already a two year starter and will likely be getting some heavy NFL consideration come April.

Will This Team Be Better or Worse Than Last Year? 7-5 was not ideal for Al Golden’s squad but a supporter could hang their hat on the fact that three of those loses were to teams that went to BCS bowls last year.  Still all of those loses were embarrassing blowouts especially on the defensive side.  The good news is that almost all of a solid offense returns and the pieces are there for them to have an adequate defense.  I think Miami will be able to outscore most of their opponents and the defense will do just enough for them to win a ton of games.

Final Thoughts: Al Golden has to start making strides quickly.  Miami should be able to improve from last year and win a few big games to go to the ACC championship even though they will likely lose an early out of conference game to Florida.  However, the elephant in the room is still the NCAA investigation and what penalties will eventually be levied against Miami. 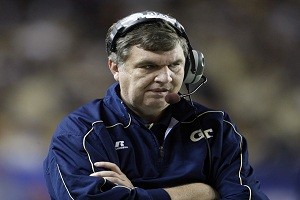 Player to Watch: WR DeAndre Smelter.  This two way player (also pitches for the baseball team) didn’t get a ton of playing time in 2012 but has shown raw catching ability as evidenced in the following clip which is comparable to some other big time Georgia Tech wide receivers of years passed.

Will This Team Be Better or Worse Than Last Year? Georgia Tech’s ho hum 7-7 record last year seems to reflect some stable mediocrity.  However, the Jackets were all over the place with blowout wins vs. USC and losses vs. Middle Tennessee and BYU.  The Josh Nesbitt experiment is over letting Vlad Lee take the reins for the triple option.  Georgia Tech also has a real favorable home schedule as only at Clemson and Miami is the biggest road test of their five toughest games.

Final Thoughts: Paul Johnson has his back to the wall.  After showing amazing progress in 2008 and 2009 when he came in, the team has regressed each year since.  Strong improvements need to be made and the threat of the pass improved for Georgia Tech to return to top 25 status. 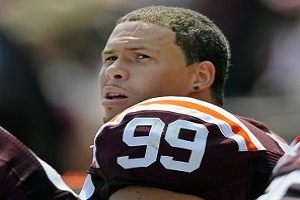 Player to Watch: DE James Gayle. Fans of Virginia Tech are used to Beamer Ball with athletic special team plays and specialty offense.  However, the success of the 2013 team hinges on the defense and James Gayle will be a key factor.  He had five sacks last year and looks to anchor the defense this year.

Will This Team Be Better or Worse Than Last Year? Virginia Tech schedule is really weak.  They start off big vs. Alabama and do have to go to Miami and Georgia Tech but they avoid Clemson and Florida State and don’t have any other out of conference tests.  I still think even with this favorable schedule that Virginia Tech will lose all of their big games this year.  I think the win total will be greater than last year but the potential being thrust on this team by some in Blacksburg are overstated.

Final Thoughts:  Virginia Tech is a solid contender for the ACC but it seems like their momentum built up in the mid 2000’s is being squandered.  Their recruiting classes are still solid though and Va Tech should be returning to top 15 contender status in the next two years. 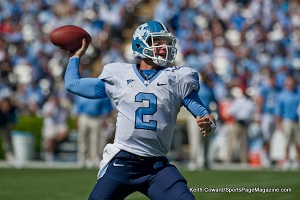 Player to Watch: QB Bryn Renner.  In a league without Tajh Boyd, Renner would be the odds on favorite to be the elite quarterback.  His touchdown to interception ratio of 28/7 last year was impressive and he will be asked to carry even more of the load this year since they lost Giovanni Bernard to the Cincinnati Bengals.

Will This Team Be Better or Worse Than Last Year? North Carolina went 8-4 last year but was only a handful of plays from being either 11-1 or 5-7.  Three of their four losses were a combined nine points.  The other loss was the worrisome game were Georgia Tech threw up 68 points and they couldn’t stop anyone on the field. I see North Carolina stepping back this year for the sheer reason that other teams in the conference are getting better and North Carolina lost a great RB in Benard.  Renner will be a fine QB that may get some looks at the next level but overall it will be a step back in 2013 for the Tar Heels.

Final Thoughts:  North Carolina will be an interesting team to watch and any given week could reak havoc on teams in the Coastal Division. 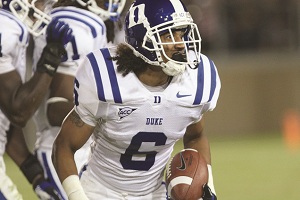 Player to Watch: CB Ross Crockett.  Crockett excels in the 4-2-5 defensive scheme as evidenced by his five picks last year.  The ACC doesn’t have a ton of top flight receivers so most weeks the opposing teams #1 will have their hands full with Crockett.

Will This Team Be Better or Worse Than Last Year? Probably about the same.  QB Renfree is now on the practice squad of the Falcons but they retained most of their talent in other areas.  The recruiting class was about what you could expect for a academic and then basketball first school.  Wining a bowl is the big goal for the Blue Devils.

Final Thoughts:  The Blue Devils are always a feel good story when they do well because they do seem to represent a lot of what can be good about a college athlete.  I think they will finally get their big bowl win this year. 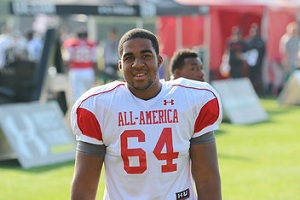 Player to Watch: OL Dorian Johnson.  6’5 , 290lbs coming into school.  No wonder Johnson was one of the biggest recruits on the O line last year.  His highlight film of him pancaking people in high school is an awesome watch.  Johnson is the kind of player where you know you are getting three years of maximum production and can build the team around from there.

Will This Team Be Better or Worse Than Last Year? Pittsburgh went 6-7 last year but is in a tougher conference this year and has a rough schedule.  They start by hosting Florida State and have an out of conference match with Notre Dame.  Looking over the schedule, I don’t see how they get to six wins and the game vs. Syracuse is critical.

Final Thoughts: Pittsburgh, much like Syracuse, was desperate to enter the conference but wont be dominating out of the gate.  They did have a very good recruiting class so upside is there, but I think it will be a sub par debut year in the ACC for Pitt. 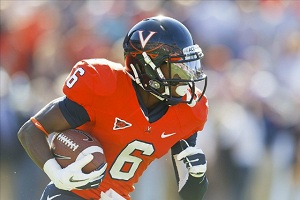 Player to Watch:  WR Darius Jennings.  Jennings was targeted almost 100 times last year.  Unfortunately, he only came away with 48 of those.  For Virginia to be relevant at all, Jennings has to get that production up.

Will This Team Be Better or Worse Than Last Year? Somehow, Virginia won four games last year, but that is not happening this year and I may be taking back what I said about Boston College and Wake Forest and them being the most blah programs in the NCAA.

Final Thoughts: Looking over the schedule, I don’t see how this team wins three games unless they get a big upset.  Enjoy seeing Oregon play on your home field Cavalier fans.