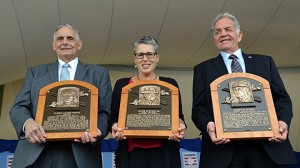 It was a rather soggy weekend in Upstate New York, and there was a discernible lack of living inductees to celebrate. But that did not deter the denizens of baseball’s mythical birthplace as they put on their annual celebration.

Things kicked off on Saturday, as they have been for the last couple of years, with an awards ceremony to honor the Ford C. Frick and J. G. Taylor Spink awards for broadcasters and writers respectively. The great Blue Jay announcer Tom Cheek had been awarded the Frick award posthumously, though a much more recent passing than Sunday’s Hall Inductees as he died in 2005, and was represented by his widow Shirley. The Spink award winner, long-time Philadelphia scribe and currently a writer with MLB.com, Paul Hagen is alive at the present time, and gave a speech. Interestingly enough, in the speech he did take a pot shot at one of the banes of internet journalism: the comment section of articles, where unlike “stern letters to the editor” the instant reaction and anonymity that user handles bring do lead to some horrific trollish behavior. The Saturday festivities continued with Dr. Frank Jobe, who was the surgeon behind Tommy John Surgery and Thomas Tull, Legendary Pictures CEO who produced the Jackie Robinson biopic that was released this year, 42, being honored.

Sunday’s festivities were delayed by rain which seemed appropriate considering the circumstances surrounding the lack of new BBWAA inductees, and the sparse amount, for various reasons, of Hall of Famers returning for the ceremony. Whatever the reasons, there certainly was a pall over the lazy Upstate New York hamlet. Speaking of palls, per usual the Hall took time to memorialize Hall of Famers who died since the last induction ceremony. Those being long time AL President and executive with several teams Lee McPhail, legendary Oriole manager Earl Weaver, and Cardinal icon Stan Musial. The latter was shown in video form conducting “Take Me Out To The Ballgame” on his harmonica from an induction ceremony from long ago, as was the custom whenever he’d return.

This was followed by the Grandnephew of turn of the century umpire Hank O’Day, Dennis McNamara, who made the only offhanded comment of the day about doing things the “right way” which was referring to one reason why there were no new living inductees on the podium on the day. O’Day is probably most known today as the umpire who called Giant Fred Merkle out for failure to touch second base, hence necessitating the final game of the season make up game between the Cubs and Giants for the 1908 NL pennant. The Cubs won the game, and eventually the World Series.

In lieu of living inductees, the Hall decided to give several past, and long since passed, Hall of Famers their due. This was based on the fact that during the early 1940s, due to World War II travel restrictions, there were no formal induction ceremonies. A big group of them were the Old Timers Committee selections for 1945, and so they brought up several of the returning Hall of Famers to read off the plaques. First up was legendary catcher Carlton Fisk to read off another legendary catcher Roger Bresnahan’s plaque. Slugging first baseman Orlando Cepeda would do the same for Dan Brouthers. Pirate Hall of Fame manager Fred Clarke’s plaque was read by Pirate Hall of Famer Bert Blyleven. Legendary third baseman Jimmy Collins’ was read off by legendary third baseman Wade Boggs. And Slugger Billy Williams would read off slugger Ed Delhanty to round out the first half. 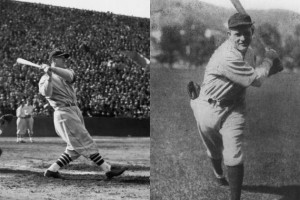 The grand finale of the afternoon though was the formal inductions of a not too shabby right side of the infield, in fact maybe the greatest right side combination to perform during the same era! First up was the 1942 BBWAA selection and easily a candidate for the greatest second baseman ever, Rogers Hornsby. One of the greatest pure hitters in the game’s history had his formal induction done by someone who is also in the conversation with him among the greatest second basemen of all-time, Joe Morgan. And finally, a man who was selected to the Hall in a late 1939 special BBWAA election after his career was ended suddenly by the rare disease that now bears his name, Lou Gehrig. Gehrig, easily a candidate for the greatest first baseman ever, was formally inducted by the man who went on to break Gehrig’s all-time consecutive games played streak, Cal Ripken.

And with that, the 2013 ceremonies came to a close.

Now looking ahead, there are a couple of ways that the ceremony will once again feature living inductees at the podium. First is the Expansion Era (1973 onwards) Ballot, which will not be revealed until the fall, with the selections to be made during baseball’s Winter Meetings in December.

This year, look for players like Steve Garvey, Dale Murphy, Davey Concepcion, and Dwight Evans, managers (and this will probably be where the selections will come from) like Tony LaRussa, Joe Torre and Bobby Cox as well as a couple of controversial executives, though both deceased, George Steinbrenner and Marvin Miller. Should be quite an interesting selection, if any, from this back door.

But, the big one is coming in January. It was the BBWAA’s decision to play fast and loose with how they felt the so-called “steroid era” should be dealt with that caused no living inductees on a soggy Sunday in Cooperstown. Well, that and the fact that 2013 was the Pre-Integration (the beginnings up to 1947) Era’s year to be up for a vote.

However, things may shake out differently this coming year as Tom Glavine, and Greg Maddux, though both of the “Chicks dig the long ball” Nike ad fame, are probably locks on their first ballot considering they’ve never had much in the way of whispers and innuendos about them and PEDs.

The only name that jumps out as a potential Hall of Famer without any sort of steriod taint is Mike Mussina, but is the Moose first ballot worthy? Probably not, but it can be a good bet that the writers will look at the fact that there are no whispers or “anecdotal evidence” to convict Mussina beyond being on Oriole and Yankee teams with other users, (even though that seemingly was used to keep Craig Biggio on the outside looking in this past year) and punch Mussina’s ticket to Cooperstown.

Now, to the 800 pound gorilla in the room. The massive log jam left from this past year’s decision not to induct anyone. The 17 players still left on the ballot.

First off, the top three from last year, Craig Biggio, Jeff Bagwell and Mike Piazza will probably inch a little closer, and could possibly be swept in on the strength of getting Maddux, Glavine and Mussina in. It still is looking like Barry Bonds, Roger Clemens, Sammy Sosa, Rafael Palmerio, and Mark McGwire, will continue to get punished in the BBWAA’s own peculiar way as well.