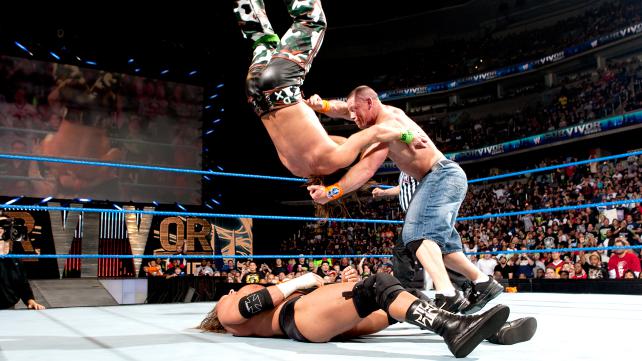 On the recent Brad and Chad Survivor Series Special show, we talked at length on the main event of Survivor Series 2009 and its legacy in relation to the overall show’s ranking. I took the position that the match was fine but instantly forgettable, had egregious triple threat match tropes, zero historical significance and was highly predictable – hurting the final ranking of 2009. I took a step back after the show and thought more about the match. Chad re-watched and went **** – no small accomplishment at all for this main event. Is this match actually a hidden gem?

To set the stage here, John Cena was fresh off his Randy Orton feud, having won the title back in the Ironman match at Bragging Rights. In a shoehorned theme, the WWE and World Heavyweight Championship matches at Survivor Series would be triple threat matches against the preeminent tag teams of each respective brand. Earlier in the evening the Undertaker took on tag champs Chris Jericho and The Big Show for his title. There was no reason to believe either belt would change hands given the participants and storylines going in. In my opinion, both the lack of build (worth noting there is no video package before the match either) and the earlier match diminish the significance of the main event.

The one talking point the announcers have is if DX will combust and turn on each other. This is answered promptly with HBK shockingly super kicking Triple H right at the bell in a great start, and Cena’s exaggerated acting is good. I’ll argue that HHH was so defensless, his nap on the outside was warranted for at least half as long as he eventually took to get back in the action.

Michaels takes a top of the turnbuckle bump and lays prone for Cena to hit a couple kicks into his unguarded mid-section before Cena catches him off the bounce into an Attitude Adjustment, but it’s too early and Shawn reverses into a DDT. Innovative spot there, and one can appreciate Cena trying to put the match away early against two formidable foes. HBK does some very light leg work and we get an agonizing John Cena in a figure-four, three and a half minutes into the match. This was all very rushed and didn’t go anywhere. Cena eventually reverses and both guys sell this early knee damage momentarily as they exchange standing strikes.

Cena hits a shoulder block but goes for another and HBK moves, leaving Cena to bounce off the mat to the outside. Cena oversells this miscue and gives HBK enough time to hit a crossbody, and now Shawn is fired up. He rips off the monitors from the announce desk. Cena surprises HBK into another Attitude Adjustment attempt but, nearly six minutes later, Triple H appears and pulls Shawn off him. While you’d first wonder why he’d make a save like that given the start of the match, it makes perfect sense when HBK dumps Cena into the ring bell area and turns around right into a massive spinebuster through the table. Striker remarks “They say you’re always more inclined to take out damage on your best friend.” Who says this? Striker is actively bad in parts during this, as he really tries to sell this as an all-time spectacle that we are witnessing. We next get a business exposing replay of the opening super kick from a different camera angle, clearly showing HHH peering over to anticipate the kick.

Cena and HHH slug it out now as HBK sits out, and a run off the ropes by John is greeted by another thunderous spinebuster. This gets two, which somewhat shocks the announcers for some reason. HHH hits some great strikes as Cena bounces around. Triple H launches Cena into the turnbuckle with a diving irish whip to really put over his effort. Good neck and back work by HHH after another powerful irish whip and a neckbreaker. Cena ducks from HHH coming off the ropes so HHH grabs him into a Pedigree but Cena reverses and then catapults Triple H into the turnbuckle. HHH hits a clothesline and covers, which temporarily breaks the great flow these two have. Both guys slug it out now in a very good exchange, which results in Cena hitting his shoulderblocks, and a five knuckle shuffle. HHH is primed for an Attitude Adjustment but, five minutes after being smashed through the table, HBK returns to save Triple H as he throws Cena shoulder first into the turnbuckle.

We get a DX staredown before HHH shoves HBK out of the way to grab a charging Cena, throwing him from the ring to the outside. Act 3 of our play begins now as Shawn hits back-to-back sequences of pretty terrible chops and atomic drops. These two looked like Chad and I out there trying to wrestle. HHH uses the high knee and catches Shawn in another spine buster off a kip up. Pedigree is countered and Shawn climbs for the elbow, but Cena is back after a two minute respite to stop him. Cena then climbs another turnbuckle but his flying leg drop on the prone HHH is missed and now Shawn is back up for the elbow on Cena. Striker remarks that this is why we love the business, and I have to think that hyperbole would have been better saved for later.

HHH immediately dumps Shawn, but Cena trips him up and locks on the STF. We are rapidly approaching finisher-spam time and we still haven’t gotten anything meaningful with the three guys together in the ring. It’s a pretty good STF by Cena, and HHH does a nice job selling and crawling to the ropes, but before he gets there Shawn is back and locks a crossface on Cena. Another strong submission here, clinched in tight, but Cena powers to his feet with HBK in the Attitude Adjustment position but Shawn elbows out. Cena is woozy from the hold but shrugs it off and snaps HBK into the STF. Shawn gets to the ropes for a big pop as the match continues. Cena eats a super kick and a returning HHH does as well, leaving Shawn to fall out of the ring for some reason and Triple H to land on top of Cena in a covering position. Crowd goes nuts as the ref looks at Shawn on the outside. We finally get a count but Cena kicks out in a nice nearfall. That would have been something.

Despite the transparent finish, the match and crowd have helped ratchet up the drama. Matt Striker then remarks that “We’ll never forget this match”, and I would counter most would forget this match by the following night. Both guys are up but HBK is still exhausted from firing off those kicks. Cena hits an AA (finally!) on HHH but here’s Shawn to join Cena in crawling for a cover. Both guys cover HHH and the ref decides to count, with HHH kicking out. This didn’t have near the reaction from the crowd as the previous nearfall.

Lawler is the voice of reason and gets Striker off the topic of trying to figure out the rules on referee discretion and who would have been champ had HHH stayed down as we head to the big finish. Cena rises with HBK, blocking a super kick and pushing Shawn into HHH. Shawn breaks free and goes for a piledriver but HHH reverses him into Cena’s waiting arms for an Attitude Adjustment. HHH isn’t having that and kicks Cena, tries for a Pedigree but HBK super kicks HHH down, only to be grabbed into an AA and slammed on top of Triple H. HBK bounces off and to the ropes and the pinfall on HHH is academic in a very strong finish.

The story told is DX truly in every man for himself mode, so we don’t get any double teams or teamwork spots. This is worked in very distinct parts with little to no interaction between the three men at the same time. The early gaps for HHH and HBK are legitimately six and five minutes of missed action, which is notable when the entire bout is 21 minutes. The beginning super kick and end of the match are well put together. The sections with HHH and Cena laid out the back and neck work that would come into play later and were noticeably better than anything worked with HBK. A hot crowd helps, but in the end I still don’t see this one being anything more than a very deliberate WWE triple threat match with everyone moving on to bigger things the next night.