Hey there, Weber Has Issues readers. I hope that your holidays are going well. Christmas is coming very soon, and I have very little shopping done so far. Luckily, the fine fellows here at Place to Be Nation have a convenient link to Amazon for all of my purchasing needs.

Speaking of “cheap pops”, the master of them, WWE Hall of Famer Mick Foley, has been writing books for over 15 years now. He’s recently joined the ranks of celebrity comic book authors, which has lately been populated by his fellow stand-up comedians such as Brian Posehn (Deadpool) and Patton Oswalt (Serenity). Foley’s project is a WWE tie-in comic, and those have historically been pretty…awful. Will Foley break the curse? Will a wrestling-related comic book not completely suck? Will I ever get used to only spacing once after the end of a sentence? Read on…. 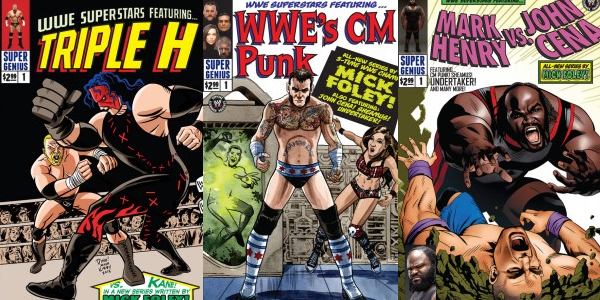 WWE Superstars (Super Genius, $1.99 digital, $2.99 print), by Mick Foley (with Shane Riches) and illustrated by Alitha Martinez is the latest attempt from the WWE to cross over into comics. The title takes WWE Superstars and re-imagines them as urban adventurers (because a comic about actual wrestlers would be you know, silly). I purchased it on my iPad through the Comicology app (which bills to the iTunes Store). Here’s a description, straight from the splash page:

Titan City: a metropolis where everyone’s hiding secrets and there’s no one to trust. In a corrupt world where everyone is looking to cash in, we’ll follow the journey of three men… John Cena’s been framed for a crime he didn’t commit. Randy Orton’s on the verge of achieving citywide power. And CM Punk is determined to bring the whole corrupt system crashing down. From the scheming Southside to the barren desert no man’s land where even the law refuses to go, the powerful factions of Titan City are locked in a battle for control in an unforgettable noir landscape. 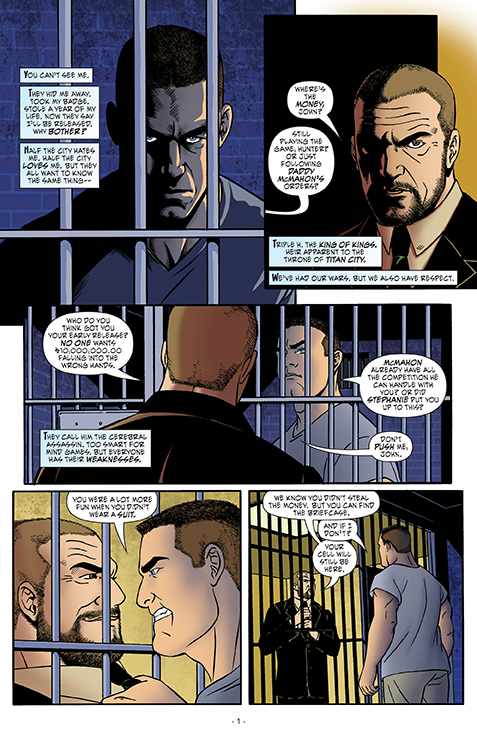 Well, this sounds silly, but I’m probably not the target audience (the book is recommended for readers 12-up). The story begins with the unjustly imprisoned former cop Cena behind bars and being taunted by pathetic corporate shill HHH (I guess Mick DID bring some wrestling reality into the series). HHH informs Cena that the McMahons (the mafia-esque entity running Titan City—heh) arranged for Cena’s early release in order for him to search for a missing briefcase filled with ten million dollars. Perhaps the “money’s in the bank”, but that’s unlikely. Cena, done with his hell in a cell, is looking for payback somewhere in the battleground of Titan City, where the extreme rules and the royals rumble. He’d better use some TLC, or someone will give him a raw smack-down. Ok, I’m done with the WWE puns.

If you buy in and let yourself suspend some disbelief (even more than you do when you watch pro wrestling), the comic is pretty entertaining. Foley has the voices of the characters down, and besides Cena and HHH we see alternate-reality versions of the Miz (a TV reporter), Randy Orton and Alberto Del Rio (dueling candidates for Titan City’s district attorney), CM Punk (a vigilante), the Undertaker (a tattoo artist), Zeb Colter and the Real Americans (racist prison guards), Hunico and Camacho (as themselves), Christian (a policeman), AJ Lee (an opportunistic and insecure social-climbing slut -oh wait), Ryback (a bodyguard), Dolph Ziggler (a detective), Daniel Bryan (an anarchist) and many others. Foley weaves the characters together well, and even gets them in action situations where they can execute their signature finishing maneuvers. This is a fun comic, especially for younger WWE fans. 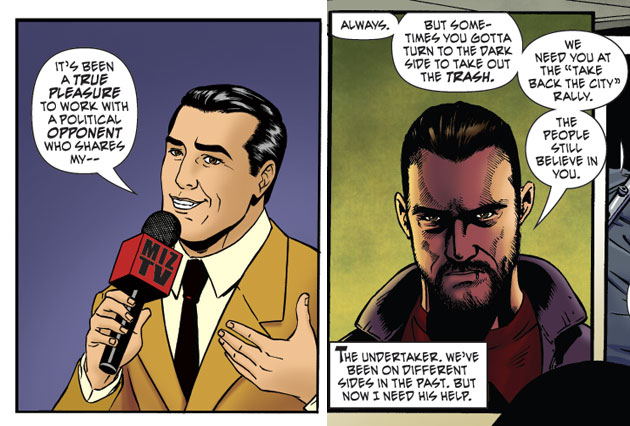 The art is mostly very serviceable, and Alitha Martinez does a good job with the likenesses of the Superstars. Only once or twice did I not know who a character was without reading the dialogue. The main attractions, however, are the story and seeing how Foley uses the WWE’s trademarked characters in a new way. This comic is likely only to be read by wrestling fans, but if they’re willing to try something a bit different, WWE Superstars is a fun comic book that utilizes the WWE’s intellectual property well. Bang-Bang, have mercy, and have a nice day!