This week in “Weber Has Issues”, we step into the way back machine for two comics set in the fifties and sixties. Also, for the first time here at WHI, one of the comics being reviewed is a digital-first issue, which means it’s only available online and not made of paper–at least not yet (a physical copy will be released in a few months). If you are an iPad user, digital comics can be lots of fun, and are sometimes cheaper than their paper-bound brethren.

I’m sure you mostly know this, but in the pages of Detective Comics in 1939, Batman started out as a grim, gun-toting vigilante. Around the time the U.S. got involved in WW2, Batman lightened up a bit, taking on a teenage sidekick and began facing equally flamboyant villains. Throughout the 1950s, Batman and Robin comics became more and more bizarre, featuring trips to other dimensions or strange transformations of the duo. Sales gradually dropped, and DC made Batman a bit more contemporary in the mid-sixties, updating his look and giving his adventures a more zany tone. National Bat-Mania hit when ABC broadcast the campy Batman series beginning in 1966, making Batman comics increase in circulation to nearly a million sold per month. The comics reflected the tone of the show for some time, but there was no actual adaptation of the show in continuity (or with likenesses of the actors etc). The DVD rights for the show have been contested between Fox and Warner Brothers for years; merchandise featuring Adam West’s costumed Batman likeness or the style of the show has been off-limits for DC and its licensees as well. Recently, rumblings of a deal between Fox and WB have brought new attention to the tongue-in-cheek adventures of the dynamic duo, leading to comics and retail projects that feature that particular version of the character. 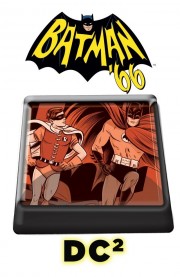 Batman ’66 #1,(DC Comics, $0.99)written by Jeff Parker with art by Jonathan Case, was an absolute and unexpected BLAST.  It’s the first time DC has done a comic in the style of the original show, with accurate character models and the BANG/POW trademarked action.  Parker and Case clearly had a ball playing with the toys in this sandbox.  This comic is exactly what I expected, but was so much cooler than I could’ve imagined. I would never watch the show nowadays for anything but nostalgic value, but this tale works on several levels and is much better than a simple homage. The story plays out like an extended scene from the show. (It’s pretty tough to read the book without projecting Adam West and Burt Ward’s voices over Bruce Wayne and Dick Grayson, but I think it adds to the fun.) We start the story with Bruce & Dick attending an awards ceremony for the Gotham P.D. at Gotham Park, but a biplane carrying the Riddler crashes the party. Of course, our heroes pop up to save the day. The bulk of the issue is an extended action/chase sequence, but thankfully it’s not a quick read. It’s a standard plot, but the joy of reading it cannot be denied. I loved reading this. Great, hilarious script, beautiful and dynamic art, Batman ’66 is so much fun–and it works on multiple levels. This is the rare comic that my kids and I can enjoy together. 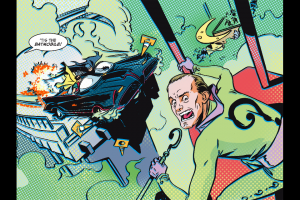 One of the reasons I recommended this book is the amazing bang-for-your-buck (literally–it’s ONE DOLLAR). Not all digital comics are cheaper than their paper counterparts, but I’m much more likely to buy digital if it’s a lower-risk investment. If I hate the issue, I’m out less money; but if I love the comic, I’m more likely to buy a hardcover or trade collected volume for posterity. Between Batman ’66 and Brian K. Vaughan & Marcos Martin’s FANTASTIC, digital-only Private Eye (available at Panelsyndicate.com) I’ve read more digital comics in the past few months than ever before. If you have an iPad or a Kindle, digital comics may really be for you. In Batman ’66, word balloons within the panels reveal one by one with a touch. Coloring and shading change within the panels as the dialogue progresses. It’s very cool, though some may dismiss it as gimmicky. I feel it adds to the complete package, and the coloring effects are really complementary to the retro story. To buy Batman ’66, download the “Comics” app from Comicology on your mobile device, and download through their store (my account links to iTunes). I don’t recommend reading this on a phone unless your wife took the iPad with her to Hawaii and you need to get your review in immediately. If you are not a tablet person, DC’s pattern has been to reprint these as hard copies a few months later. It may not be as fun of an experience as this digital version is, but I’ll wager it’s still worth your time.

WHO WOULD LIKE THIS: fans of Mike Allred’s Madman; spendthrifts; hipsters; cool cats; fun-loving comic fans of all ages; and fans of the amazing pop art found in the 60‘s Marvel comics. 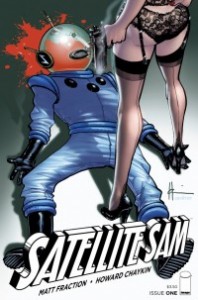 I also highly, highly recommend Satellite Sam#1(Image Comics $3.50) with Matt Fraction story/Howard Chaykin art. It’s a very dark tale set in the 1950’s (the golden age of television) with amazing, amazing black and white art. I wish I had the time to give this book justice (we had a family emergency this weekend) but I’ll do my best. Satellite Sam is fantastic, but NOT APPROPRIATE FOR ALL AGES (and it may not be the best comic to bring home if your wife is sensitive to the sort of images one would find in Maxim magazine. My wife liked it, though. Honest.) This is a murder mystery from the early days of television, before everyone and every studio moved out to Hollywood.  Michael White (think Clark-Kentian nice guy) is the earnest son Carlyle White, the star of LeMonde television’s flagship show Satellite Sam.  What happens when Carlyle goes missing right before showtime, and what’s all that cheesecake paraphernalia doing is his flophouse?  Does Carlyle White have a shady secret?  Tune in to this issue, dear readers.  The dialogue is dense and rapid-fire, and you get a ton of character exposition early on.  There’s a lot of control room chatter and pressure, and you really see the nuts and bolts of putting a show together in the black and white era.  This a high-tension life, and Fraction’s plot and dialogue do a great job of hooking the reader.  The aforementioned art is so incredible – Chaykin gives us clear characters and he paints the world so thoroughly  the you could almost follow the whole story without reading the dialogue.  This is stellar stuff, its edgy, twisted and sharp, and it’s right up my alley.  This one belongs right up there with Saga, The Wake, Lazarus, East of West and Private Eye for me.  Compelling, thrilling and stylish, Satellite Sam goes down like a top shelf gin-and-tonic. 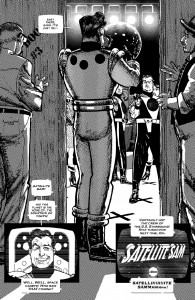 WHO WOULD LIKE THIS: Watchers of “Mad Men” and “The Hour”; readers of James Ellroy’s novels; Steven King aficionados; people who appreciate the complete intellectual works of artists such as Bettie Page, Evie Lovelle and Dita Von Teese.