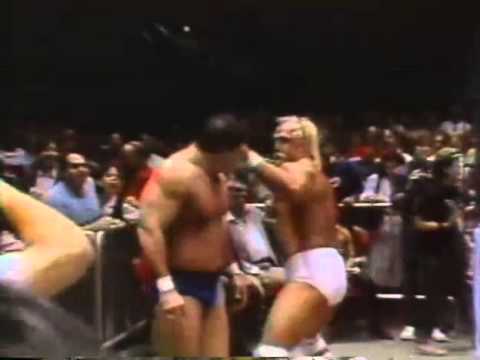 Hulk Hogan vs. the Magnificent Muraco (w/ Mr. Fuji) for the WWF Championship.

So we are now three weeks removed from the grand spectacle that was Wrestlemania and suffice to say, it was a great success and now the question becomes where the WWF goes from here. While a few of the feuds did culminate at WM, there are a few that were clearly going to continue and it would be interesting to see how the house shows would play out over the next month. One of the bigger questions is what will become the base feud for the WWF Champion Hulk Hogan as it was clear his feud with Roddy Piper would probably still continue though they would not battle at every house show since they wanted the feud to be a long one. Another question going forward is what would happen to those who did not appear at WM, one of them being the Magnificent Muraco who was not a part of the big show despite being pushed as one of the top heels. It did feel like a slap in the face to Muraco that they couldn’t find a spot for him even though there were a few spots he could fit, but on the other hand it was clear that he was still a top guy and that would come true here as he would begin a feud with Hogan that would be specific for MSG.

As mentioned, this feud didn’t really have much of a start other than that the two men met on 4/19 in Pittsburgh with Hogan winning by DQ, and it was decided that these two would have a feud based solely in MSG while Hogan would continue his main feud with Piper on the other house shows in addition to facing other random opponents. It was a pretty good choice as Muraco was still a pretty hot heel and was getting re-pushed, and Hogan was still someone who could have different matches with different opponents and it seemed like he could have some good chemistry with Muraco. Plus making this feud exclusive to MSG also makes it feel special as if they do run the match at another house show, it makes it feel even more special and draws even more people.

After being the main event the last two times he was at MSG, Hogan is moved back to being the mid-show main event as he gets a huge pop from the MSG crowd while Muraco was still red hot as a heel. This was also during the time when Hogan was wearing different colors for his matches and he comes out here in the swank all-white combo. The two men lock up to start with Hogan reversing a whip and he hits a hiptoss on Muraco, and then he hits a high knee that sends Muraco over the top to the floor. Muraco regroups before returning to the ring and they lock up with Hogan working on the arm and he goes behind Muraco, and Muraco hits a series of back elbows to try and escape only for Hogan to hit a drop toehold and he hooks a headlock. He goes back to the arm of Muraco as the crowd chants “Hogan” and he continues to grind down on the arm, but Muraco escapes with a slam only for Hogan to recover quickly and he takes Muraco down to the mat while going back to work on the arm. Muraco fights to his feet and pounds on Hogan only for Hogan to hang onto the arm and he pounds on it, and then he takes Muraco to the mat and drops a leg on the arm. Muraco begs off only for Hogan to grab the arm again and he continues to work on it, but Muraco fights to his feet and whips Hogan off only for Hogan to catch him on the mat with an elbow. Hogan hits an armdrag and goes back to the arm of Muraco, but Muraco fights to his feet and goes for the leg as Hogan continues to work on the arm. Muraco grabs the leg and catches Hogan with a low blow that knocks him to the mat, and then Muraco snaps the leg back before kicking at the leg. I thought these first few minutes have been pretty good as Hogan continuously frustrated Muraco and worked the arm until Muraco found an opening to take control, and Gorilla and Gene have done a good job in putting both men over for their ability.

Muraco grabs the leg and snaps it back again before hitting a falling headbutt to the leg, and then he drops a knee on Hogan’s leg before hooking a spinning toehold and falling down on Hogan’s leg. Muraco hooks a submission on Hogan before slamming the leg into the mat, and he kicks at Hogan and stomps on the leg before trying to trip him up only for Hogan to hit an enzurgiri on Muraco. Hogan kicks at Muraco and hits an elbow that sends Muraco through the ropes to the apron, and Muraco rolls back into the ring as Hogan rams him into the buckle and then he whips Muraco into the other corner and splashes him. He hits a big slam on Muraco only to miss the elbow and Muraco jabs his thumb into Hogan’s throat, and he again jabs Hogan in the throat with the thumb before choking him on the mat. Muraco pounds on Hogan and knocks him down before dropping a knee on him for a two count, and Muraco again jabs the thumb into Hogan before choking him on the mat. Muraco sets Hogan up for the Tombstone piledriver only for Hogan to smash his legs into Muraco’s head to escape the hold, and Hogan starts to fire up as he no-sells Muraco’s shots and Muraco begs off before Hogan pounds on him in the corner. Hogan hits the big boot which sends Muraco over the top to the floor and Muraco trips Hogan up and pulls him to the outside, but Hogan pounds on him before Fuji tries to get a shot in. Hogan stalks Fuji around the ring only for Muraco to come up from behind and ram him into the apron, and Muraco rolls back into the ring as the ref counts Hogan out which Muraco wins the match though Hogan retains the title. After the match, Fuji tries to take the belt from the ref only for Hogan to grab it and he returns to the ring, and he lays the belt on the mat as he challenges Muraco to try and take it. Muraco hesitates for a minute before making a dive for the belt, but Hogan grabs him and gets a kick in before clearing him from the ring with the belt and he poses for the crowd as Muraco heads to the back with Fuji.

The match itself was pretty good as both men worked hard and put on a solid match that maybe could’ve gone a few minutes longer as it was really building to something bigger. As mentioned, Hogan was hitting his stride as the top guy by this point as he could work different matches against various opponents while Muraco was still a pretty solid worker as well, and the two men meshed well here and had some good chemistry that you knew could get better over the course of this feud. The ending was pretty shocking as well as this was a time where Hogan rarely lost matches, but it was clear that this feud would continue between these two and it made sense for Muraco to steal the win to set up a rematch between the two. The crowd was red hot for the match and into everything Hogan did, but they are both shocked and pissed off when Muraco gets the win though they pop when Hogan clears him out and stands tall. Muraco steals the win over Hogan by countout and Hogan retains the title as a result, but this feud is clearly far from over.