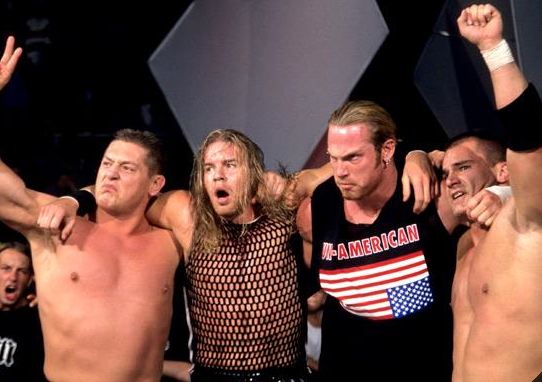 One of wrestling promoters’ favorite thing to do is to form a faction of a collection of guys when something isn’t readily apparent for the wrestlers to do in a 1-on-1 environment. The UnAmericans scream out this initiative but more than most of these hodge-podge factions, they served a decent purpose. Christian had been toiling around for a while now after the split from Edge and still trying to find his footing up against his still indy-riffic look. Test won the immunity battle royal at Survivor Series and gave Brock a good test at King of the Ring, but the writing was on the wall and they sort of knew what they had with him at this point and it wasn’t the main event superstar they had originally hoped for. Lance Storm and William Regal were both good hands that WWE knew they could throw into a IC title program and be happy with the results. These four coming together felt natural and was a nice addition to the overall roster. The babyface side is a good mesh of guy, with Booker T and Goldust starting to form their partnership. Bubba Ray is still reeling from the Dudley split and Kane in between feuds. They are given the opening slot in this PPV coming off of SummerSlam so let’s see what these two odd ball groups can produce.

Goldust and Christian start us off and it is a treat seeing a slimmed down and active Goldust in 2002. Bubba Ray gets tagged in and he and Goldust do a tandem punch/grab nuts spot to a big pop from the crowd. Bubba finally loses his backwards baseball cap when Storm sends him into the corner. Nice spot here where Regal and Christian on the apron try to attack Bubba. Bubba is able to knock off Christian but the numbers game catches up to him and Regal nails him from behind. The UnAmericans gain the advantage a minute later against Goldust when Christian pulls him to the outside. This is really good stuff in keeping the theme of the UnAmericans cheating like crazy and making the babyfaces pay when they are in the opposing corner.

Booker T is able to get tagged in and he cleans house. Booker is also over like crazy which is again refreshing to see. The storyline plays out here that 1-on-1; the babyface team is greatly superior but the UnAmericans gets some good flurries when they used a 2-on-1 advantage. Booker and Bubba Ray do the Wassup drop and then he tells Booker to get the table. According to Bubba Ray, they all must look alike.

Baseball slide into the table and face of Booker T gets the first significant advantage of the heels in the match. Test peppers Booker with punches and hits a nice running clothesline. I must say that of all the people I have watched on these pre-viewings, I may have been the most wrong about Test as based on his small sample size, he has looked really impressive. The UnAmericans do a good job throughout this sequence in tagging in and out and peppering Booker T with some offense. Booker gets a rollup and spinebuster and makes the hot tag to Kane. This is the first time Kane has been in the match and it was built up well. Kane does a great job of throwing around everyone and hitting two gutwrench suplexes.

The match breaks down with all eight guys going at it inside and outside the ring. Test hits his pump handle slam on Kane. I love this guy. Booker scissor kicks him but Christian is a jerk and breaks up the spinarooni. Signature spots are hit abound like the Bubba Bomb, Shattered Dreams, and Lance Storm’s superkick. Kane chokeslams Storm as we get a camera angle of Regal reaching in his trunks for the brass knuckles. Kane is able to thwart that off in a good tease and pick the win for his team. Bubba grabs the American flag after the match and waves it patriotically.

Many former wrestlers say the second most important match on a card is the opener. I believe all eight men in this match took that theory to heart and produced a fun, energetic opener that didn’t overstay its welcome. The spots were hit cleanly, we got some comedy mixed in with various members of the face side pretending to be D-Von, and we even had a good, cohesive story of how the heels could gain the advantage. I would have liked to have seen a tad longer face in peril sequence on Booker T but that is a minor criticism in an otherwise extremely fun match. I would give this match a big recommendation if you have fifteen minutes to kill on the network.