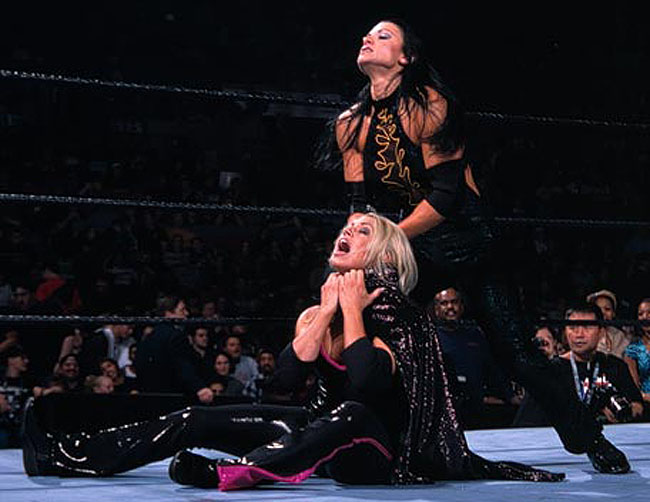 This week has brought a lot of discussion on the usual interweb spaces I frequent about the merit of women’s wrestling in the US. Some of it stemmed from the Vickie Guerrero and Stephanie segment on Raw last Monday night and some was brought on by diction choices around female wrestlers and the merit of the diva’s division as a whole. I will be announcing a new series to the Vintage Vault Pre-Viewing next week, but I figured this show was as good a time as any to revisit one of the more highly rated women’s matches in company history in Trish vs. Victoria. Trish had been steadily improving for quite some time, but it took her leading the green Victoria to a good match before people were ready to acknowledge that she was a legitimate good worker. Storyline goes that Victoria is unstable and jealous of Trish’s beauty. She attacked Terri Runnels for just being blond like Trish. They have built up an intense rivalry over the weeks and the only way to settle this vendetta was in a hardcore rules match.

JR brings up some good history saying it had been three years since the last women’s hardcore title match. Victoria jumps the bell and chokes out Trish with her own ring jacket. She grabs a broom from the four trash cans attached to each ring post and JR asks if she is riding the broom or using it. Trish monkey flips Victoria over but she quickly comes back choking out Trish with the broom handle. King knocks off his first annoying line of the night saying that this is beyond PMS. Victoria gets flipped off the top rope and we have a battle between a trashcan lid and broom handle.

Victoria hammers Trish with the trashcan lid and the action spills to the outside. Trish gets rammed face first into the trashcan and Victoria follows up with a somersault leg drop back in the ring. Victoria has been relentless on the attack. Trish gets her first big offensive spurt of the match, catapulting Victoria face first into the trash can. She grabs an ironing board and King is insufferable in talking about how domesticated she is. Victoria is sent into the board and then clubbed with the cane. Victoria takes that damage in stride with another trashcan lid shot.

Victoria has a busted nose and gets creamed with two more trashcan shots. She gets sent back first for good measure. In a weak transition, Victoria regains the advantage and powerbombs Trish. King asks when clothes are going to be ripped off. There are no words. Victoria grabs a mirror in a good bit of psychology but is unsuccessful in using it. After some rustling around, Trish hits a sloppy bulldog and it is possible that the girls are getting winded and this physical match is taking a toll. Victoria uses the fire extinguisher on the outside and does a floatover suplex for the flash win to a fairly shocked crowd.

One thing I am all for in examining women’s matches is equality. I thought Charlotte vs. Nattie from a recent NXT show was a very good match that told a well done story and had a lot of emotion. However, some of the praise the match has received has miffed me and been hap-hazard and graded on some type of scale in my opinion. Sure enough, a cursory review of this show shows that people were “shocked” at how brutal a good women’s match could be. I judge all matches by an even playing field. The work done in this match was mostly fine and the surrounding story was good. Victoria was built to look strong and Trish led her mostly through her current limitations as a worker. However, I fail to see how this hardcore match was eclipsed many times over by the stuff we saw during the hardcore title reign. That purveying thought rushed through my head throughout the match and sticks with me writing about it now. The match is decent, bordering on good, in my opinion and certainly didn’t derail a well-booked and worked PPV in front of the WWE home office. A lost classic it is not.