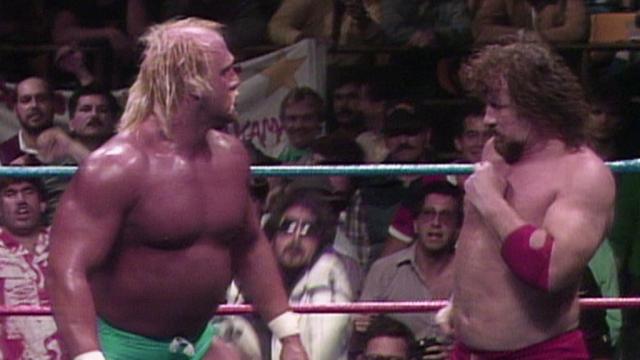 Hulk Hogan (w/ the Junkyard Dog) vs. Terry Funk (w/ “Mouth of the South” Jimmy Hart) for the WWF Championship

So after talking about the exciting and very interesting year that was 1985, we now head into a new calendar year and kick off 1986 with the first Saturday Night’s Main Event of the year (even though it was technically taped in 1985). As the year started, it was clear that Hulk Hogan was continuing to cement his spot as perhaps the biggest star in WWF history after a very successful year and he looked to keep that going into 1986. With us now being only 3 months away from the second Wrestlemania in April, it would be interesting to see who would be built up and challenge Hogan for his title. One of the names that might have been considered for that role was the legendary Terry Funk, who had been gaining steam as a top heel towards the second half of 1985. He was in the midst of a pretty hot feud with the Junkyard Dog which saw them compete at the third SNME with Funk getting the win, and you figured that he would receive a title shot against Hogan at some point. Ultimately, Funk would not be penciled in for the main event of WM against Hogan though he would instead receive a title shot here to kick off the year of 1986 and it would be interesting to see if he can finally dethrone Hogan as champion.

There wasn’t much build on TV for this match as Funk would mainly continue his feud with Junkyard Dog on the house shows and the aforementioned SNME at the beginning of November, and Hogan would mainly work against Jesse Ventura and Randy Savage on the house shows. Hogan and Funk would have a match at a house show in Denver on November 15th which Funk would win by countout, and then Funk would attack Hogan after the match with the branding iron. They would fight again at Denver on November 27th with Hogan getting the win over Funk, and they would fight again in Philadelphia on December 7th with Hogan winning again only for Funk to attack him after the match with the iron with the same result occurring on December 15th in Toronto. They would wrestle again 3 days prior to this show on January 1st in St. Louis with Hogan again getting the win, and it would be interesting to see how this match plays out and if they can have a really good match after working the house circuit over the last two months.

In a pretty cool touch, we would see clips from earlier in the day of the Superstars relaxing at Adventure Island waterpark in Tampa with Hogan appearing in the opening promo making his Protein Python shake with “Mean” Gene Okerlund to prepare for his match. Both men would cut great promos prior to the match and in another cool moment, we would see a clip from earlier in the day of JYD and Jimmy Hart competing in a water slide race with JYD winning and they would also show footage from the Hogan/Funk match back on November 15th.  Jesse rejoins Vince for commentary after competing in the opener and having Bobby Heenan replace him for that match which was a nice touch. Hogan gets a big pop from the crowd as does JYD who will be in his corner to counter Jimmy while Funk was red hot as a heel and Hogan is rocking the blue tights for this match. JYD wastes no time in asserting himself by forcing Jimmy into a chair at ringside, and Hogan and Funk lock up to start with Funk backing Hogan into the corner only for Hogan to reverse a whip into the other corner twice. He then whips Funk back into the corner and splashes him as Funk falls through the ropes to the outside, and Funk regroups before returning to the ring and they lock up with Funk backing Hogan into the ropes and pounds on him. Hogan reverses a whip and Funk trips over him before hanging himself on the top rope and then Hogan clotheslines him over the top to the floor, and JYD forces Jimmy back into the his seat as Funk regroups and returns to the ring. They lock up with Hogan hooking a headlock and Funk whips him off before dropping down only for Hogan to walk across him several times, and Funk again falls through the ropes and lands on the timekeeper’s table which he tips over. Funk tosses a chair into the ring which Hogan sets up and sits in as he taunts Funk who regroups and returns to the ring, and they lock up with Funk backing Hogan into the corner and he pounds on him only for Hogan to turn it around and he pounds on Funk. He whips Funk inside out in the corner with Funk flying over the top to the apron and Hogan snapmares him back into the ring, and then Hogan hits a back suplex on Funk for a two count and he pounds on Funk until Funk rakes the eyes and he hits a headbutt on Hogan. He hooks a headlock and hits a low blow on Hogan behind the ref’s back before stomping on him, and he goes up top only for Hogan to shake the ropes and Funk crotches himself on the top rope before falling back into the ring. Hogan hits an atomic drop on Funk and then he hits a headbutt on Funk before hitting a big clothesline, and then he drops an elbow on Funk and hooks a headlock until Funk whips him off and Jimmy trips him up from the outside. Hogan goes outside after Jimmy who tries to run away only to get stopped by JYD and he retreats under the ring, and Hogan returns to the ring as Funk takes the tape off his hand and he chokes Hogan with it as the ref is distracted by JYD. Jimmy comes out from under the ring as Funk continues to wear down Hogan with the choke and then he hits a piledriver for a two count which Jesse complains was a slow count, and Funk pounds on Hogan on the mat and rakes his boot across the face. Funk stomps on Hogan and pounds on him as Hogan starts to fire up and he no-sells Funk’s shots, and Hogan pounds on Funk and hits a back elbow before hitting the big boot that sends Funk through the ropes to the apron. Hogan sets Funk up for a suplex back into the ring only for Jimmy to get on the apron and he jabs Hogan with the branding iron as Funk falls on top of him, but Hogan gets his foot on the ropes before the three as Funk believes he won the match. JYD hits a headbutt on Jimmy on the outside as Funk argues with the ref about the count which allows Hogan to hit the Axe Bomber clothesline, getting the three and retaining the title. After the match, Funk drags the ref out of the ring and rams him into the guardrail before throwing several chairs into the ring, and JYD leaves Jimmy laid out on the floor as Hogan poses for the crowd.

The match itself was very good and a lot of fun as both men worked hard and put on a solid title match for free TV. One thing you have to say about Hogan in his early run as champion is that considering he wouldn’t be seen on the TV shows, he has brought his working boots to these SNMEs as every match he’s been in has been really good. It always felt special whenever he would appear on TV and he was having different matches at each of these SNMEs, so the matchups always felt fresh and important. It was good for Funk to get a shot here even though it was a bit obvious that he wasn’t going to win the title, and if anything it furthered the feud with JYD as he gets his shots in on Jimmy when he can. They also kept Funk somewhat strong by giving him the false finish close to the end and he looked like h could’ve stolen the title from Hogan. I thought the match was a good length of 8 and a half minutes though you could argue that they deserved a few more, but this was still early in the show’s run where they typically wouldn’t have long matches though it was clear that this was the showcase match for the show. The crowd was red hot for the match and popped for Hogan when he won. Hogan retains the title cleanly over a game Funk and both men move on as Hogan waits as to who a potential challenger will be for the future.