As Fox prepares to launch the newest 24-hour sports network, Fox Sports 1, the UFC have signed on to be an integral part of the network and the launch night. The Fuel TV and FX cards have come to an end, to be replaced by the return of the “UFC Fight Night” brand. This one is number twenty-six, but is quite a departure from what has come before – while Fight Night 25 was headlined by Jake Ellenberger .vs. Jake Shields with a co-main event of Court McGhee .vs. Dongi Yang, this FS1 debut is stacked to the gills. Arguably, this is the most loaded card ever assembled for free TV.

Headlining this landmark card is a light heavyweight tilt featuring former champion Mauricio Shogun Rua taking on the inimitable Chael Sonnen. Sonnen is looking to bounce back after two title fight losses, while Shogun is coming off a disappointing loss to Alexander Gustafsson last December. This fight is one that really has to deliver – Shogun is a spent force at 205 pounds, and Sonnen has already indicated his desire to return to middleweight win or lose. However, Shogun and Sonnen can both deliver exciting fights and the styles match up here is really intriguing. Sonnen should have the wrestling ability to control Shogun, but don’t be at all surprised to see Chael Sonnen on his back staring up at the lights when this one is over. 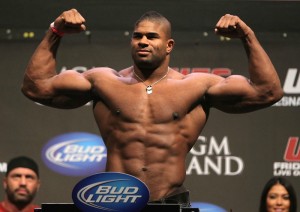 The co-main event sees the return of former Strikerforce, DREAM and K1 champion Alistair Overeem as he takes on Travis Browne. After failing a drug test for steroid usage in 2011, and being pulled out of a title eliminator with Junior Dos Santos earlier this year, Overeem is looking to get back on track in the heavyweight division. The man once considered the greatest threat to the title has seen his run derailed by controversy. Browne is not to be taken lightly, with just one loss on his record and knockout victories over Stefan Struve and Gabriel Gonzaga, but Overeem and his physical appearance will likely attract most of the attention. How he looks at the weigh-ins will be a big talking point.

Former WEC champion Urijah Faber will fight Yuri Alcantara in Faber’s third match this year so far. Faber is always a top contender in the bantamweight division, but with losses to Dominic Cruz and Renan Barao on his record it’s difficult to see what this fight offers for Faber at this point. Alcantara is a dangerous opponent with 24 finishes in his 28 victories, and has looked very strong since dropping to 135 pounds. For Faber, a win will only cement his position as the next best bantamweight to Cruz and Barao at the moment, while a loss will certainly hurt his standing. In a contest guaranteed to excite, Matt Brown will take on Mike Pyle in a battle of undefeated streaks. Brown and Pyle are 5-0 and 4-0 respectively, with all but one victory for each coming by knockout. These two will be looking to finish and finish impressively, and the winner will be left with an impressive win streak in the welterweight division. Rounding off the main card are a contest between TUF 17 runner-up Uriah Hall and Bostonian John Howard, and FOTN record holder Joe Lauzon taking on Michael Johnson. All in all this is a main card built for maximum enjoyment, and it is clear that the UFC is hoping for a significant casual audience to tune in to the network launch and has built the card accordingly. 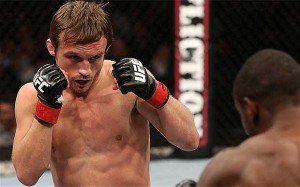 Headlining the prelim card, also on Fox Sports 1, is a bantamweight contest between top contenders Brad Pickett and Michael MacDonald. At just 22 MacDonald impressed in a good showing against interim champion Renan Barao in February, and is nowhere close to his peak yet. Despite this, having started his professional career at just 16 years old, he has amassed an impressive 15-2 record. Englishman Pickett is a fighter who has gone from being an impressive, gutsy fighter to one of the more well-rounded performers in the UFC bantamweight division, and has four FOTN bonuses to his name. Pickett is the slight underdog according to the oddsmakers, but this should be a close fight and a tough fight for both. Also on that prelim card is the hottest newcomer in the UFC, Conor McGregor, as he takes on Max Holloway. McGregor is a former Cage Warriors champion who earned KO of the night on his UFC debut earlier this year, and has made fans of many in the MMA world including UFC president Dana White. The Irishman is likely to get a huge reaction in Boston, though Max Holloway is a tough opponent and should be a good test for McGregor to try and live up to the hype.

This card has the potential to be the event of the year, even among this congested summer of fight cards. With exciting fighters and match-ups top to bottom the race for Fight of the Night is going to be a close one, and if the UFC’s match making pays off how they hope this will be a very successful debut indeed.