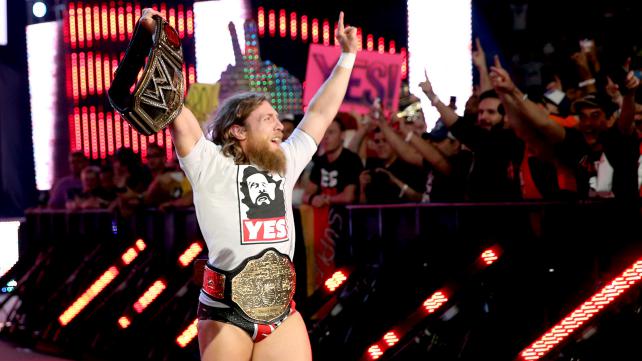 Great change is often, if not usually, born out of necessity.

It’s also a promise made in professional wrestling at a rate that greatly outpaces how often it actually happens. But at the risk of being Charlie Brown having the football pulled away by Lucy yet again, it does feel that in 2014 the tide is shifting in WWE.

Daniel Bryan capped an incredible WrestleMania – and long-term storyline – a month ago by winning the main event against two older-guard stars in Randy Orton and Batista, after first beating the definition of old-guard in Triple H to collectively amount to arguably the best overall performance by one individual in Mania history.

We saw the oldest-guard star of all, The Undertaker, possibly have his career ended in the form of Brock Lesnar ending The Streak.

We saw two already rising stars have their path to the main event seemingly laid out right in front of them: the ascents of Cesaro and Bray Wyatt are both clearly underway. (Even though Bray lost his match against John Cena at WrestleMania, he won the crowd, and not just in the typical anti-Cena way.)

The next night on the now-traditional joyfully delirious post-Mania Raw, we saw Roman Reigns, Seth Rollins and Dean Ambrose take both a literal and symbolic step toward the establishment- in the form of Batista, Orton, Triple H and Kane- to punch their ticket toward mega-stardom.

But enough of the recapping; recapping shows is not what I do, and you don’t need me to do it, anyway. If you’re reading this, you more than likely watched these events take place. The important question is how- or if- this affects the WWE going forward.

The answer might be found in how you most likely watched WrestleMania: the WWE Network.

For several years, the WWE has been content to have part-timers or returning, older stars fill a large percentage of main event-level slots at Mania and other big shows: the Undertaker’s yearly Streak match, Brock Lesnar’s 2012 return, Triple H’s now-sporadic in-ring role, The Rock’s 2011-13 run of matches with Awesome Truth (let’s never forget that this was a thing that happened, here, in the world), John Cena and CM Punk, Chris Jericho’s various short stints, all the way up to Batista’s 2014 Royal Rumble win.

But Daniel Bryan’s ascension seems to be ushering in a time of true star-making, a time in which reliance on these proven stars of previous eras will, quite possibly, no longer be necessary.

It could be that the rise of all these young stars could be a lucky confluence of seriously high-level talent at one time. To be sure, all of the aforementioned rising stars were earmarked for big things to varying extents from the moment they debuted; even Daniel Bryan, for all of his underdog, “B plus” trappings, was presented as something of a big deal upon his NXT debut.

Or it could be that change in the WWE’s business model has forced them- or presented them with the opportunity, depending on your viewpoint- to revisit how they build their roster. It’s been a prevailing belief in recent years that the WWE brand itself is the star and they’re no longer interested in creating acts that outsize the business. It makes sense in a lot of ways. Much like in, say, college football or basketball, where a successful system coached by the right guy can keep a program winning big annually no matter the yearly roster turnover, if the WWE can create and sustain fan interest that goes beyond worship of any specific performer, all the better for them.

But performers the fans want to see is still necessary, even if they aren’t larger than life megastars like the Sammartinos, Hogans, Austins and Rocks of generations past. And the WWE is seemingly aware of this more as of late than they have been in some time. We chose Daniel Bryan, and they thankfully gave him to us. We rejected their presentation of Batista as Mania’s main event babyface, and they listened. Our desire to see more of rising stars like Cesaro, the Wyatt Family and The Shield is being heard. These are encouraging times.

And they’re times that beg the question of whether stars of bygone eras will continue to be dragged out of mothballs for WrestleManias and other big events to come. As alluded to earlier, the Network’s launch is going to almost certainly change the structure of payouts to talent for pay-per-views….pardon me, “special events.” Goldberg, for example, recently said he’d be interested in a role in WrestleMania 31 at the right price. Even before we answer the question of whether or not Goldberg is a draw in 2014, does the WWE Network’s existence change these payouts in a way that would preclude such a deal from being worth it financially for Goldberg? On the other side of that coin, would his “right price” be a waste of money for WWE?

(It makes me wonder if this is part of the reason Lesnar beat Undertaker: if the Network makes mega-deals for part-timers like Brock less financially feasible, having the Streak Killer replace The Streak as a special attraction makes sense: if they play it right, Brock could be their first true heel draw in years.)

This may be jumping the gun on my part, admittedly. The WWE’s byzantine payout structure is, for the little we know about it, largely arbitrary. The Network may not change much at all when it comes to talent payouts, and the ultimate number of subscribers will certainly be a determining factor. The game has changed, but we don’t know what the rules were to begin with.

Maybe – operating under the hypothetical that the Network means less PPV revenue for talent, which, again, may not turn out to be true anyway- returning legends and part-timers will re-evaluate what their price is, with no comparable money to be made elsewhere in the squared circle. Maybe the WWE will in fact decide to use them even more, at times when Network subscriptions are likely to be in heavy rotation for renewals (around SummerSlam and WrestleMania would be the big ones, if they stick with the six-month commitment), to drum up business largely from lapsed fans who want to see childhood heroes again.

In addition to now having their own streaming network, the WWE could be finding a new television network soon, as well. As a content provider, it feels like they’re at a crossroads as to what content they’re wanting to provide. Perhaps, if they find themselves on stable financial ground and are averse to going all in with new stars who are unproven financially, they won’t face the necessity from which great change usually comes. And maybe we’ll see more of the part-timers and legends than we already have in recent years.

But whether it’s by design or chance, it sure feels like the ground is shifting. And it will be very interesting to see who’s standing tallest when it settles.