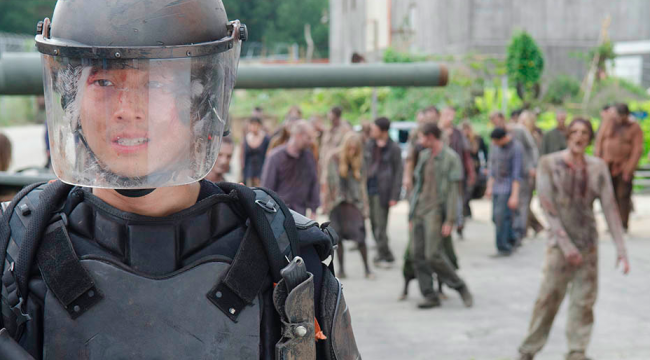 Zombie stories have a tendency to skew towards existentialism, the good ones at least. Ever since George Romero shifted the genre towards the apocalypse, it has become filled with stories about humans dealing with things that we invented society to prevent. Chaos rules the day and for the most part, quality genre standouts like Romero’s work or Danny Boyle’s 28 Days Later show people doing what they need to do: make sense and restore order in some way.

The world is chaos though, whether it is our world free of literal zombies trying to chomp down on anything that moves, or the imagined one depicting the collapse of everything we as a species have built over the course of 12,000 years. It doesn’t have to be zombies: it could be the results of catastrophic warfare or some alien invasion, or just a breakdown in the moral glue that keeps it all together even while it always seems to be falling apart. The chaos will always be knocking down our sandcastles though, no matter how pretty they look or how strong we think they are this time around. I don’t want to invoke Goldblum in Jurassic Park, but I think it would be safe to say that disaster fiction like that of zombies accepts the truths he preaches in that film and hopefully go beyond that to show what happens next.

Season Four of The Walking Dead has had a central theme of this rebuilding of a society that we would want to live in given the circumstances and the pull of chaos, a force as relentless as gravity. Even with three medically trained professionals, how does one eradicate and cure disease? Even if you repeatedly repair your fortifications, can you rebuild forever with limited resources? If you stop one bad guy, can you stop every bad guy? What started off as utopia was eventually crushed by the weight of all that chaos that we can’t control no matter how hard we try. The world can’t be tamed in the way that Michonne tames her walkers; eventually the world grows teeth again and will try to bite you. What do you do then?

Following the Governor’s brief resurgence in the lead up to the mid-season finale (the dark side of struggling for safety and the justifications we learn to accept in achieving that sometimes stoke one’s innate urges for dominance. This is how we are all OK with “pre-emptive” strikes etc.) the prison safe haven was literally blown open, leading to a diaspora of the survivors that matter into somewhat interesting dyads and triads. The prison raid and need to escape was sudden and reflexive respectively, and once each group started to catch their breath, the varied ways they experience their living hell and cope with the never ending struggle become the focal point of “Inmates.”

Writers Matthew Negrete and Channing Powell show us, in order, everyone else who survived that ISN’T Carl, Rick, and Michonne  (who we saw last week). We begin with Beth, narrating from her diary optimistically about finding the prison. Those were the days! Her optimism in the flashback spills over into the post-prison escape as she desperately holds onto the hope that the other’s survived. Even the brutal slaying of her father seems to not faze her.

The comparison to Anne Frank who was facing similar circumstances, staring at the prospect of possible death, is unavoidable here. Both girls were victims of the brutal side of man’s nature and the harsh reality of the world, but still held on to their faith in things ending well. Beth is reminded of the world she lives in though with walkers everywhere eating the flesh of someone who had been living and it finally breaks her, leading her to tear the pages from her diary.

Sister Maggie holds on to a similar faith that husband Glenn is alive and well despite finding the bus that he was helping to load people onto filled with walkers, presumably the residents fleeing the prison. After helping clear the bus, walker Glenn was nowhere to be found which lets her hold onto the hope that he is still alive somewhere. We see Glenn wake up at the prison above a sea of walkers, and he too runs through a progression of emotions, pausing for his sadness over the possibility of losing everyone he loves yet again and possibly over the un-ending struggle for life before seeing a photo of Maggie which prods him to keep moving.

Glenn gathers supplies to take with him as he flees the now very dangerous prison, and it leads to some thought provoking questions about necessity and sentiment. Glenn takes with him only that which he needs. Sure a Dictionary may be useful and provide a link to a world slipping further into the past, but when survival is the only goal there is no time or space for the written word or anything sentimental. The best way to survive is to leave behind all of one’s attachments, because roots will just lull one into a false sense of security and slow them down when it is time to run, which is something that will always have to happen. Everyone is finally starting to realize this, but it makes one question whether or not these emotional attachments are what MAKE us human. Is simply surviving enough when one loses that emotional attachment to the people and things that they care about? 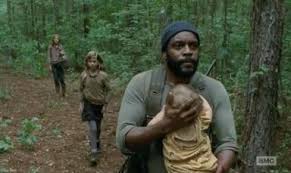 Nowhere is this huge philosophical question more explored than with the children of The Walking Dead. Much has been written about Carl’s eerie coldness growing up in this new world, but seeing Lizzie almost suffocate Judith was horrifying, especially when you realize that our notions of right and wrong start to dissipate the more surviving becomes the only goal. It is a natural progression that when one’s imminent survival is at stake, even what we consider morally reprehensible by civilized standards doesn’t apply anymore. Lizzy has adopted that way of thinking, as had Carl to a certain extent, and certainly Carol too, who made her reappearance in this episode. Daryl still does the right thing, but his pragmatism doesn’t leave any room for tears and the same seems to go for Sasha and Bob when they attempt to reason with Maggie. No matter how much faith one chooses to have, one needs to live in the here and now. Those that have lost everything and everyone they loved realize that while they need each other, they can only rely on themselves. Everything else is illusory.

Set in a shopping mall and dealing with the very early break from the “world as we know it,” Romero’s Dawn of the Dead had a lot to say about capitalism, even commenting on the reflexive nature of consumerism and showing how bizarrely hollow it is when facing a world plunged into madness. It is hard to not see echoes of that here, though here we deal with the “cut-throat” aspects of a life of struggle.  Capitalism is about the individual’s success being solely in their hands. In order to be really successful one needs to assume the line of thinking of “whatever it takes.” In this extreme example, those coming of age are just learning the reality of the cold world and adjusting accordingly. Romero never got as bleak, but this just logically follows his visions. If you can’t feed the baby and its screams are literally going to kill you, one can’t be faulted with doing something that is so morally wrong. Morals have no place here.

Despite the rise of moral ambiguity, we still need each other and we can all change despite any evils we might have committed. We’re all going to die anyway, but if we at least TRY to stick together then maybe we can live just a little bit longer than if we tried to do it solely on our own.

The Walking Dead reminds us that there is a place for optimism, even if reality makes us think that there is no point. The point is living and not being an asshole which is hard enough even without walkers trying to eat your face.

Next week: Can we trust these Army guys ? And why is it called Terminus?