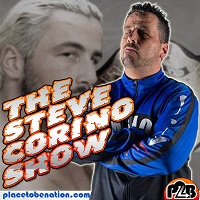 On this episode of The Steve Corino Show, the King of Old School delivers his thoughts and impressions of ROH Best in the World. From his love of Matt Hardy to his swank yellow sports jacket, Steve can’t hide his feelings for one of the biggest nights in Ring of Honor history. He then previews WWE’s next pay-per-view, Money in the Bank, while Dan totally jinxes Bad News Barrett in a way that you will have to listen to believe.

Then Steve is joined by longtime friend and veteran grappler, Guillotine LaGrande, who talks extensively about wrestling overseas, working as a heel and humorous tales from his lengthy career.

The 10-week anniversary concludes with an extended Twitter Love segment that featured a cameo by the vacationing Queen of the Corino Kingdom and a very special tweet from “The Icon” Matt Hardy.

The King of Old School shares his thoughts on wrestling, sports and more each week at Place to Be Nation. The Steve Corino Show also features a weekly guest and Steve answers your Twitter questions!