One thing we at Place to Be Nation like to celebrate is the subjectivity inherent in entertainment — be it in wrestling, comics, music, television or, indeed, film. With that in mind, ten members of the PTBN staff will be picking the movies of the PTB generation.  In this series, panel members will collect their five favorite films of each year, beginning with the year in which the oldest writer was born — 1976. The only rule given to each contributor was to provide his or her own criteria. Some writers may go with the most artistic films, while others might side with the most iconic blockbusters. We welcome your lists on Facebook and Twitter. Each staff member has submitted a list of five movies from 1984 ranked 1 through 5. A first-place vote is worth five points, a second-place vote worth four points, and so on. Using that point system, we have identified the top 5 movies of 1984.

1984 is widely recognized as one of the deepest years in film history. There were numerous iconic films released that year, and the year provided the first year in which two movies finished with more than 30 points. But before we reveal the top 5, let’s see the movies that received votes, but fell short of making our final list.

This is Spinal Tap — 10 points

A Nightmare on Elm Street — 3 points 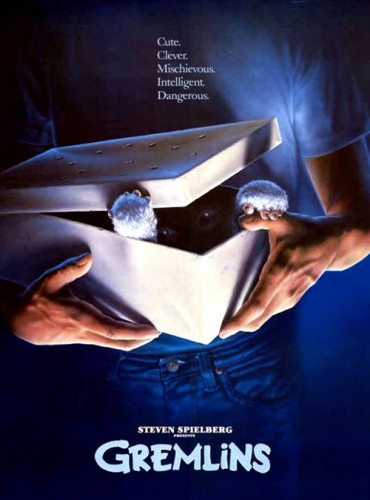 12 points, ranked by 5 of 10 voters, highest ranked by Kati Price and Russell Sellers at No. 3

Kati Price:  Keep them away from the light, don’t get them wet and most importantly, never feed them after midnight. These would seem like simple enough rules to follow , but not in the world of the holiday classic Gremlins.

This movie follows a family and their adventure with a mogwai. Of course, the first night they break the first rule multiple times, so it doesn’t look promising that they will keep all of them. And they don’t.

Randal Peltzer brings the adorable Gizmo home to his son, Billy, as a Christmas present. Gizmo’s species is referred to as “mogwai.” Rules concerning the care of the creature are soon broken. First, he gets wet which causes new mogwais to pop off of his back. Feeding them after midnight turns them into evil Gremlins. One of the Gremlins escapes and multiplies. The gang of evil gremlins terrorize the city. They are no longer the cute furby-looking creatures anymore. They all end up in a theater where they enjoy “Snow White.” Billy sets the theater on fire and kills some of them, however he misses Stripe, the leader of the group. Stripe finds water and almost multiplies but Gizmo opens a window and sends sunlight onto him causing him to die. In the end, the man who originally owned Gizmo comes back for him and tells them they are not ready for such a responsibility.

Nothing says Christmas quite like a horror film. It’s a cute little movie though and a classic for sure. “So if your air conditioner goes on the fritz, or your washing machine blows up, or your video recorder conks out, before you call the repair man, turn on all the lights, check all the closets and cubbards, look under all the beds. ‘Cause you never can tell; there just might be a gremlin in your house.”

3 (tie). Indiana Jones and the Temple of Doom

Andrew Woltman:  If I was to meet any celebrity in the world, I would be able to keep my composure quite well. However, if I was to be placed in a room with Harrison Ford, I would lose all control. Between Indiana Jones and Star Wars, he contributed so much to my childhood, and on my recently published list of my 25 favorite movies of all time, he had roles in 6.

The second Indiana Jones movie is the one Steven Spielberg likes the least out of the original trilogy due to it’s largely dark tone. I myself was horrified during my first viewing of an old VHS tape at 1 AM when I was age 11. To be sure it is more gruesome and fear inducing, but it is as every adventurous as the first film. The everyman hero who takes a beating and torture is relatable to nearly every walk of life. In this movie specifically, he is tested to his dire most limits. (It seems that George Lucas loves torturing Mr. Ford in the second film of each trilogy he puts him in.)

Being that this film takes place before the first movie,we find a more skeptical Indy , and along the way we find more of a belief in the unknown. I have never put much thought into Hinduism, but this film really brought a lesser known religion to the limelight, and for that reason I commend it.

Andrew Riche:  Although his career was full of films that did not make a great impression, no one has a one-two punch in their resume quite like John G. Avidsen does. He was one of the most recognizable names during the New Hollywood era of the 1970’s thanks to films with great leading male performances like Joe and Save the Tiger. Then he directed our top film in 1976 in Rocky, the quintessential boxing film of cinema. Eight years later, he somehow made a film even more inspirational than Rocky by directing a story based on a boy named Daniel LaRusso who wants to learn karate from Mr. Miyagi to fight off bullies.

The lines in the film are even more classic and memorable than most of the plot lines. “Wax on, wax off.” “Get him a body bag, yeah!” “Very good, Daniel-san.” “Sweep the leg.” All of this dialogue was written by screenwriting veteran Robert Mark Kamen, and sure, there are plenty of scenes and moments that reek of 80’s in The Karate Kid. But it is the relationship and beautiful chemistry between young Ralph Macchio (who had only done Eight Is Enough and The Outsiders before this) and “Pat” Morita, a comedian of Asian descent who was best known for a season-long role on Happy Days, that gives this movie its fierce kick.

What seemed like a mediocre pairing for a rip-off of heart-tugging sports films like Breaking Away became a timeless piece that actually put karate in the American mainstream. Morita was nominated for Best Supporting Actor for what many originally deemed to be a throwaway role before he turned Mr. Miyagi into an iconic mentor to Daniel. Macchio’s career never took off after that per se, but he and Morita did return, as did Avidsen, for two not-so-bad sequels to finish the trilogy. Despite those later installments or the two that came after those, nothing comes close to touching The Karate Kid, unless you want kick in the chops. 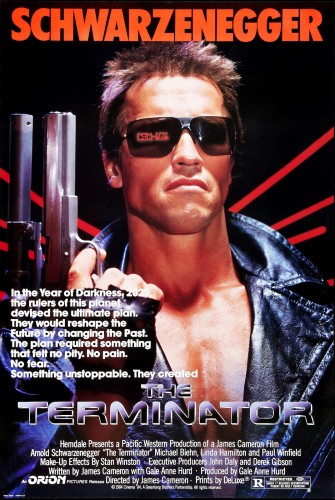 Glenn Butler:  The point of this project is to mark the movies of our generation, highlighting films that have stuck with us and briefly examining how & why. The Terminator has proven to be an incredibly sticky movie, with many lines & images that have been seared into our generation’s collective consciousness: I’ll be back; your clothes, give them to me; come with me if you want to live; the time-travelers arriving naked in a ball of lightning; Stan Winston’s amazing Terminator model standing up in the burning ruins of a tanker trailer and walking through the flames.

The killing machine that (almost) cannot be stopped is straight out of the horror genre. The foot chase by a slow, shuffling Terminator in the final act is straight out of classic mummy movies. The time travel aspects are informed by any number of twentieth-century science fiction stories, and the fear of machines has been a literary trope longer than science fiction has been a defined genre. But The Terminator plays with these elements, and combines them with the structure of a quintessentially 1980’s action movie, in a way that feels fresh and exciting even after thirty years and umpteen viewings.

While the cast definitely shines — Michael Biehn handles the action hero role with aplomb, Linda Hamilton brings the character of Sarah Connor from her beginning as a typical woman to a matriarch with a long road ahead of her, the supporting cast includes such luminaries as Paul Winfield and Lance Henriksen, and of course Arnold Schwartzenegger’s stoicism and severe Austrian features sell the concept of the Terminator — the behind-the-scenes aspects of the movie also contribute significantly to its success. James Cameron’s career in blockbuster film was all but started here. Brad Fiedel’s synthesizer-and-piano score adds to the alienating atmosphere, except for the main theme, a structurally-interesting piece that injects some humanity into the proceedings. And it’s sort of a high-concept movie, what with the predestination paradox in which an attempt to use a time-traveling robot assassin to prevent the birth of humanity’s future military leader ultimately results in his conception, but the screenplay handles its considerable backstory effectively by doling it out in moments of tension, using it to form the pauses between car chases and shootouts.

The only significant mark against this movie is that almost everything in it was done better in the sequel…but we’ll get there. 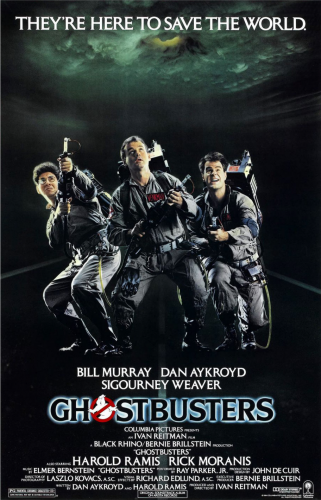 Russell Sellers: I don’t want to say there’s any such thing as a perfect film, but this is as close as you’re ever likely to get. Can you name another film that’s equal parts buddy comedy, horror, action, romantic comedy and sci-fi with iconic performances form no less than four actors and a theme song that remains incredibly popular all over the world 30 years after its release? Of course you can’t!

On paper, Ghostbusters sounds like something that should completely flop. And it easily could have, but the writing skills of Dan Akroyd and Harold Ramis along with Ivan Reitman’s expert direction made it into one of the biggest hits in history. It spawned a successful animated series, catapulted Bill Murray to superstardom, had two theatrical runs in less than a year and is getting another one this year, changed the visual-effects landscape and still didn’t walk away with the Academy Award for Best Picture. But I digress…this story of three down-and-out scientists starting their own paranormal investigations and eliminations business only to run afoul of a dimension-hopping “god” bent on destruction is the most fun I’ve ever had watching a movie. Who didn’t want to strap on a proton pack and bust some ghosts after seeing this the first time? Mileage varies on the sequel (I love it!), but this is one of those rare moments in film history where magic was truly captured.

If you’re ever troubled by strange noises in the night, plagued by senses of dread in your basement or attic or if you actually see a spook, specter or ghost; pop this one in and you’ll know exactly what to do next. I’ll leave at this: if someone asks me if I want to watch Ghostbusters I always say “Yes, have some!”