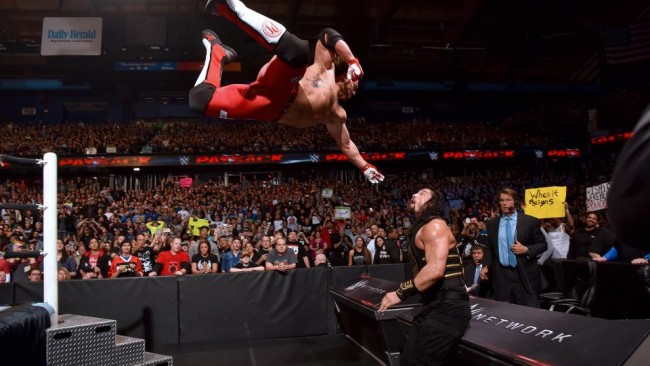 Live from Chicago, IL, it’s the first PPV of the NEW ERA.

Enzo & Cass beat on English to start while the New Day eats pizza at ringside and takes selfies. Cass tosses Enzo onto English for two, but Enzo charges and misses, allowing Gotch to toss him and take over. And apparently Enzo got whiplashed on the way out, because the ref throws up the dreaded X and we call for the bell at 4:00.

Great video package for this one. They immediately do the epic slugfest and Zayn tosses him for a dive and they brawl on the floor. Back in, Zayn gets two and takes him down with a headscissors, but Owens trips him up on the apron to take over. And then sends him into the stairs a few times for good measure. Back in, Owens kicks a field goal on him and chops him down to set up CHINLOCK CITY. A suplex onto the top rope sets up a senton for two. Sami pops up with a lariat to make the comeback and slugs away in the corner, and a Michinoku Driver gets two. Or as Michael calls it, a “Blue Thunder Bomb”. Sami actually hits the real move and gets two, which Cole calls a “traditional” Blue Thunder Bomb. Owens comes back with a fisherman’s buster for two and frog splash for two. Cannonball in the corner, TWICE, but Zayn counters the powerbomb into a half-nelson suplex, from which Owens pops up with a lariat and both guys are down. They do the slugfest again and Sami rolls him up off the powerbomb for two. Tornado DDT, but Owens blocks it with a backbreaker in mid-move and they fight to the apron. Owens tries another powerbomb out there, but Zayn backdrops him to the floor and follows with the corner DDT. Back in, Owens blocks the Heluva Kick with a superkick, and the pop up powerbomb finally hits to finish at 14:41. They just went out there and let it all hang out and it was awesome. ****1/4

Kevin Owens remains here on commentary, and immediately takes credit for Cesaro’s injured shoulder. Cesaro does a pretty reversal off a wristlock and suplexes Miz for two, and a backbreaker gets two. Owens is unimpressed with both guys. Cesaro tries a suplex from the apron, but Maryse assists with a block and Miz goes to work on the injured shoulder. Neckbreaker gets two, but Cesaro gets a sunset flip for two. Kevin’s take: “Sami Zayn could beat either one of those guys, and I just beat him, so what does that tell you?” Can’t argue with that logic. Miz grabs a sleeper, but Cesaro powers out and makes the comeback with running forearms in the corner and a dropkick for two. Cesaro with a superplex for two. The springboard uppercut sets up the Giant Swing, but Miz kicks him in the shoulder to break. Swiss Death forearm gets two, but Miz escapes the Neutralizer and sends Cesaro into the post. Skull Crushing Finale gets two off that. At this point, Sami Zayn returns and brawls with Owens at ringside out of nowhere, and Cesaro gets the Giant Swing and a crossface while Miz taps. But sadly, the ref is distracted by the brawl, and Cesaro falls victim to the most devastating finisher in WWE: The distraction rollup at 11:12. The crowd wasn’t really super into Cesaro as a big star until the end, but the finish was tremendously done and both guys worked hard. In particular, the visual of Zayn appearing out of nowhere to brawl with Owens was great. ***1/2

Ambrose pounds away in the corner and Jericho decides to run away, but Ambrose catches him with a bodypress and slugs away. Jericho backdrops him to the floor and follows with a baseball slide to take over. Back in for a suplex on the top rope and springboard dropkick and we hit the chinlock. Ambrose fights out and Jericho puts him down with a dropkick while mocking the fans, because apparently he’s a troll now. Ambrose reverses him into the corner on a bulldog attempt and comes back with a tornado DDT for two. Jericho with the double axehandle and Walls, but Ambrose escapes that and gets a neckbreaker for two. Ambrose goes up and lands in the Walls, but makes the ropes quickly. Jericho gets frustrated and charges, and lands on the floor as a result, and Ambrose follows with a dive. They fight on the announce table and Jericho catapults him into the timekeeper’s sections, but as usual Ambrose keeps coming and beats the count. Ambrose blocks the codebreaker and hits the rebound lariat for two. To the top, but Jericho dumps him to the floor again, and Ambrose suckers him in for a necksnap on the top rope and a flying elbow for two. They fight to the top again and Jericho fights him off this time, but lands in Dirty Deeds, only to reverse into the Walls again. Dean slaps himself around and powers out, and a small package gets two. Jericho puts him down with an enzuigiri for two. Backbreaker gets two. Ambrose makes the comeback and blocks the Lionsault, then turns it into Dirty Deeds to finish at 18:21. GODDAMN. ****

I don’t know what’s in the water tonight in Chicago, but hopefully it travels with them.

Nattie goes for the Sharpshooter quickly, but Charlotte escapes and takes over with a cheapshot and chokes her down on the ropes. Natalya comes back with the low dropkick, but Charlotte goes for the knee to put her down again while talking smack to Bret. That seems ill-advised. Charlotte with a half-crab, but Nattie reverses to an armbar and Charlotte gets the ropes. To the top, but Nattie shoves her to the floor. Charlotte tries to pull her out for a powerbomb, but Natalya takes her down with a rana on the floor in an awkward spot. Back in, Charlotte blocks the discus lariat with a big boot for two. Nattie blocks the figure-four and gets the discus for two. Charlotte blocks the Sharpshooter and hits the Natural Selection for two. Moonsault gets two. Figure-four, but Natalya reverses and Charlotte makes the ropes. Charlotte now uses the Sharpshooter and Charles Robinson quickly rings the bell at 13:22 as we’re apparently doing another Montreal finish here in 2016. Well that was stupid. Match never really clicked and that finish was brutal. **1/4 Even worse was the announcing, as the idiots were more concerned with pointing out the obvious reference to the Montreal finish than actually explaining WHY it was happening.

Vince McMahon joins us to make his decision about RAW, and actually manages to outsmart the crowd when they were chanting for CM Punk at him. Stephanie comes out and talks FOREVER about how great she is and all the things that the Authority did. Shane comes out and shows all the headlines about what a great boss he’s been and how Stephanie nearly burned the whole promotion to the ground with her “venomous spew”. And yet I thought they were just talking about what a huge success that the WWE Network is? Anyway, after what feels like an hour of jabbering, the decision is that both Shane and Stephanie are running the show. That was incredibly lame and kind of sucked the life out of the show for me. I DON’T CARE WHICH MCMAHON IS RUNNING THE SHOW.

And they IMMEDIATELY mute the sound during Roman’s entrance while the announcers are like “ISN’T IT GREAT THAT EVERYONE IS SO PASSIONATE ABOUT ROMAN, MAGGLE!” AJ goes for the knee to start and puts Roman on the floor with an armdrag. Back in, Roman wants to fight, so AJ runs away and takes over with a cheapshot from behind. Roman quickly dumps him to the floor again. Back in, Reigns with a lariat and a rollup into a powerbomb, and a sitout powerbomb gets two. Superman punch is countered with a high kick and AJ gets a seated forearm to take over. Roman catches him on a springboard attempt, but AJ rolls out and into the Calf Crusher, and Roman makes the ropes. Reigns bails to the floor, so AJ follows with a Phenomenal Forearm off the top to put Roman through the table. And AJ wins by countout at 11:55. So Shane joins us and restarts the match as no-countout. So fall #2, I guess, and AJ immediately goes after him and hits the Pele Kick. The 450 misses, however, and Reigns gets two. AJ goes up and Reigns accidentally punches him in the nuts on the way down at 2:15, and it’s a DQ. And now Stephanie comes out and now it’s no-DQ as well, so Reigns tosses AJ and beats on him outside. They brawl into the crowd briefly and back to the ring, where Roman blocks the Forearm with the superman punch and gets two. Another superman punch follows, but the Bullet Club heads out to beat on Reigns with the Magic Killer, allowing AJ to hit the Phenomenal Forearm for two. And now the Usos are out to brawl with the Bullets, but Roman dumps AJ onto everyone and then hits a dive onto the pile. AJ gives him another forearm and a 450 for two off that. Roman backdrops out of the Styles Clash and hits the spear to finish at 8:23. The third “fall” was pretty good, but this whole thing was WAAAAAY overbooked and still didn’t answer the question about which side the Bullet Club is on. And of course the show ends with Vince and the bickering children as the stars of the show. ***

I think that the middle portion is a clear thumbs up for a $9.99 PPV, with two **** matches and a good Cesaro-Miz match, but the Women’s title didn’t need the ridiculous screwjob finish and the main event was a giant mess. And yay, the New Era means More McMahons.