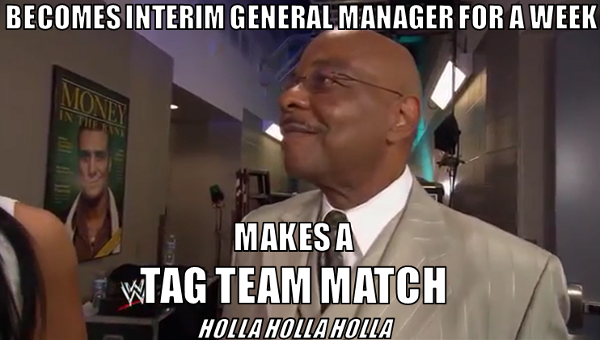 We’re going to do things a little differently this week. Yesterday WWE announced a new round of roster cuts, their traditional “spring cleaning” set, so we here at The High Spot have divided the list of those who have just now been wished well in their future endeavors so that we might reflect for a moment upon their careers to date, what they’ve done, what they’ve meant, and where they might go from here.

Theodore Long is definitely the most accomplished among those released this week. He has a long history in the wrestling business, dating back to the mid-80’s when he started on the ring crew for Jim Crockett Promotions before becoming a referee and eventually a manager, two roles he would play in both WCW and WWF/E until 2004, when he became the General Manager of SmackDown. During his many years on SmackDown (interrupted by a brief run as General Manager of ECW), Long found his groove as a tough-but-fair, thuggin’ and buggin’ GM who kept finding small ways to try to put the heels in their place and rein in some of the chaos he faced week to week. Personally, I found T.Lo to be far and away the best authority figure character WWE’s presented in the last ten years, and possibly the best since Jack Tunney (with possible competition from Gorilla Monsoon and/or Commissioner Mick Foley), as he ruled over SmackDown without any of the tedious theatrics of the Evil Boss. His departure now isn’t a punitive firing, but a mutual parting at the end of a long contract after many years of service; he hadn’t even been used on television in many months. He’ll still be General Manager as long as we remember him. Who knows, he may even be back eventually. (Some of the Minbari believe he’ll come back some day, but I never saw him again in my lifetime.) Think of it this way: as long as you can make a singles match a tag team match, there will be a need for Teddy Long. As long as there’s an office in need of a prominently-placed portrait of Dr. Martin Luther King Jr., there will be a need for Teddy Long. As long as there’s an egotist on the roster who needs to go one-on-one with The Undertaker, there will be a need for Teddy Long. (Granted, someone will have to take the place of The Undertaker.) And as long as WWE insists on running the same Evil Authority Figure storyline they’ve been running since 1997, over and over and over again, there will be a need for Teddy Long.

Drew McIntyre and Jinder Mahal, half of the 3MB stable along with the remaining Heath Slater and Hornswoggle, found different ways into that group but have now made the same exit. In 2009, McIntyre was highly touted as The Chosen One, a designation that came with the Intercontinental Title and a personal endorsement by Vince McMahon, but after feuds with John Morrison and Teddy Long the first version of Drew’s gimmick fizzled out. After brand changes, an Elimination Chamber appearance, and a short but promising tag team stint with Cody Rhodes, Drew wound up in the 3MB stable along with Jinder Mahal, whose “Indian royalty” gimmick had similarly fizzled out. Together with Heath Slater, McIntyre and Mahal clung to the bottom rung of the WWE TV ladder as, mostly, fodder, before just recently gaining increasing relevance as part of the Hornswoggle-El Torito feud. It is curious for the two to be released now, after holding what must surely be considered surprisingly prominent positions on TV and PPV events. Jinder Mahal may, frankly, not be much of a loss, but Drew McIntyre in particular had greatly improved as a wrestler and a TV personality since his rookie push, and like Chris Masters a few years ago, may simply have found himself in that terrible middle space where he had enough talent to keep around as a solid hand (to a point) but too much baggage to truly give a renewed push to, especially with so many up-and-comers on their way. TNA has gotten a lot of guff over the years for counting a tenure in WWE as a top qualification for employment, but Drew McIntyre would be at the very least a dependable, solid player anywhere he goes.

Brodus Clay was truly refreshing as the Funkasaurus, a big man without the traditional Big Angry Giant gimmick so familiar to anyone who’s ever watched pro wrestling. The Goofy Big Dude is also a bit of a cliché, of course (Big Show has switched between the two poles five or six times since you started reading this article), but Brodus committed to it with such gusto, from the dancing to the rip-away pants to the banter with his opponents, that it was truly something to behold. His confrontations with Dolph Ziggler were of particular note; Ziggler gets squashed by big guys like it’s his only purpose in life, his first, best destiny. The Funkasaurus was never going to be World Champion, but the gimmick was infectiously fun, and if you simply must hammer him into the Big Angry Giant role (Big Show is going to have to retire eventually, after all) he did show some talent in that area both before and after the Funkasaurus run, in a nice little series of matches with Christian in 2011 and against Adrian Neville while on his way out this past month. It seems he may have run amiss with the wrong people, as there was ample opportunity for the Funkasaurus to roll on longer, or for Clay to do more in another role, but instead he went through stretches of simply not being used. All is quiet on Planet Funk; funk is, indeed, no longer on a roll. And yet his sidekicks remain, a testament to the power of being cast on Total Divas.

JTG and Camacho, like Jinder Mahal, held places for a long time at the bottom of the card. JTG in particular had gained some notoriety among a contingent of fans for his ability to endure the thinning of the herd year after year; he certainly outlasted his former tag team partner, Shad Gaspard, by several years. His luck ran out this week, however, after a ridiculously long losing streak stretching throughout 2012 and 2013 preceding a total absence from on-screen programming in 2014. Perhaps this means we should have seen his release coming, but many had been seeing his release coming for a long time. Camacho, though, is somewhat more surprising given that he had had a relatively consistent presence on NXT, not to mention the credibility lent to him simply by being Haku’s son. Instead, his lowrider bicycle is doomed to gather dust in a soon-to-be-forgotten corner of the WWE warehouse. Both men were certainly presented as fodder, but there’s always a place for that in wrestling — if everyone is special and great, then the words lose their meaning. The presence of an upper card implies a corresponding lower card; the gods above, the beast below. Perhaps, again, there are simply too many younger guys coming up through NXT with less baggage (and lighter paychecks) to keep long-serving hands such as these. Both guys are still relatively young, though, and like most of the people just released should have at the very least a career in the “former WWE Superstar” leg of the indie circuit ahead of them.

Evan Bourne: So everybody knew this was coming, right? Bad luck (freak injuries and a car crash) and bad choices (multiple wellness policy violations) plagued the incredibly popular high-flier’s run in the WWE. The former Matt Sydal likely has the most options after WWE, as he noted in past interviews that he had an open invitation to return to Dragon Gate Japan. His aerial abilities and strong history in the independent scene would make him a likely fit as a special guest for Ring of Honor (where has a long-standing relationship with booker Delirious) and Pro Wrestling Guerrilla. He also most certainly would fit in with the Mexican lucha style if he chose that route.

Curt Hawkins: In my opinion, the most underrated name of the entire group. As an avid listener of the “Art of Wrestling” podcast, Hawkins’ name is frequently mentioned by his peers as being extremely talented. Within hours of his release, he had his entire weekend booked, plus, as heavily reported, operates his own wrestling school in the Northeast. Hawkins looks to be a staple in the indie scene for years to come and may even be one of those talents that get resigned by the WWE in the future.

Yoshi Tatsu: Despite being with the company for over six years, Tatsu never quite broke past the lower portion of the card, mainly relegated to ECW, Superstars, and NXT. The notable exception was his victory in the pre-match battle royal at Wrestlemania XXVI. Tatsu started his career in New Japan Pro Wrestling, so the door could be open for a return there, despite his advanced age and relative obscurity in that promotion.

Aksana: As I looked through Aksana’s history in the WWE, the biggest surprise is that she lasted nearly five years with the company. Her most notable accomplishment during this calendar year was destroying Naomi’s eye with a stiff knee drop. Once the WWE signed Lana to manage Rusev, Aksana must have known her days were numbered, as having two Divas with Eastern European gimmicks seems redundant.

Mark Harris: Poor Mark Harris. No one really knows much about him, what he looks like, or his skills as a referee. While I never want to see someone lose their job, the evil in me smiles that the ultra-cool Drake Younger moves one step up the referee list down in developmental.