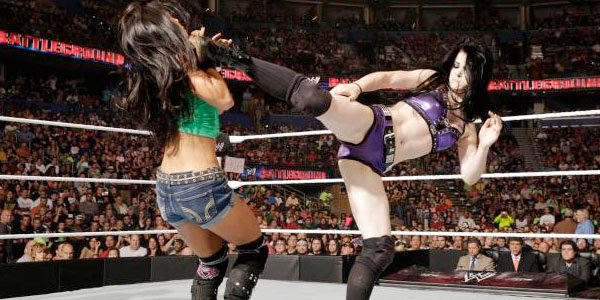 Could a women’s Hell in the Cell match be feasible in today’s mainstream wrestling product? That was the excellent question posed to Divas’ champion A.J. Lee in a recent interview with IGN. Lee was clearly open to the prospect, and believes that her current feud with Paige would be the perfect opportunity to break new ground in women’s wrestling. But what would this look like? There’s already been a drop in the brutality associated with Hell in the Cell; gone are the stunt show tactics of Foley/Undertaker from Hell in the Cell 1998, or the bloodbaths like HHH/HBK from Bad Blood 2004. And would fans want to see such brutality from the current cache of female competitors in the WWE? Outside of A.J. and Paige, likely not. Even looking back, the prospects for an appropriate “blood feud” that could have ended in the cell were small. Glenn suggested the Mickie James and Trish Stratus rivalry as a possibility, while Steve favored the Bull Nakano and Alundra Blayze series of matches. Obviously, the level of mainstream American women’s wrestling has never reached the brutality levels of the All Japan Women or GAEA Japan promotions, but giving athletes who clearly want to advance the state of their craft a chance seems to be a no-lose scenario.