Like the comics of their namesake, the Fill-In Files will interrupt your regularly scheduled programming with inconsequential, off-the-wall installments pulled from the mothballs. A veritable smorgasbord, you can never know when the Fill-In Files will drop or what they may contain. In other words, an excuse to talk about anything comics-related of interest to me when I don’t otherwise have any irons in the fire. Consider yourself warned!

In an effort to make the P2B staff immediately regret their offer to bring me on “full-time,” here are far too many words about far too meager a topic: a nearly irrelevant issue of Uncanny X-Men from 1993! Why only NEARLY irrelevant, you ask? Well, this satisfies some topical interest, for it is a Thanksgiving-themed comic!

What can I say, I’m a sucker for holiday stories in comics. Some people organize their issues by title, others by publication date. Me? I have a long box full of books that take place at Christmastime, circa 1968-present. I can’t point to any compelling reason for this fascination. I suppose I enjoy the traditional holidays as much as the next person. In practice, I however, I tend to find this time of year to be a little dispiriting and exhausting as an adult. It may be that my love for comics simply magnifies the joy that Christmas once signified, and serves as a connection to some earlier, happier memories from my own life — whether through comics, through Christmas, or through comics ABOUT Christmas.

Thanksgiving too. Let’s keep our eye on the prize. The great thing about Thanksgiving is it tends to be pretty uncomplicated (assuming you aren’t doing all the cooking). Cantankerous family members to contend with, sure, but whatever, it’s a day. Everyone gets together, eats, and goes home. Sometimes you have to pull double (and triple) duty, but that just means more eating. I guess we’re also supposed to count our blessings from the year that was, but whatever. The years really blur together the older and crankier you get, so mostly, there’s just a lot of eating to look forward to.

Yeah. Thanksgiving’s pretty awesome. But lumped between Halloween and Christmas–and crunched by an ever-widening shopping season–Thanksgiving just never gets its proper due. In reality, and in the funny books.That ain’t right, and I see fit to do something about it.

As you can imagine, there are far fewer Thanksgiving than Christmas-themed issues in comics. The Justice League and Justice Society made something of a tradition out of their frequent team-ups set at Thanksgiving, but I’m afraid I’m a Marvel guy and can’t speak to any of those. Maybe one of my peers better versed in DC-fu would be inclined to take up that particular charge! I’ll concede that they are probably more representative and memorable than some random X-Men issue. Until then, you’ll have to settle for: 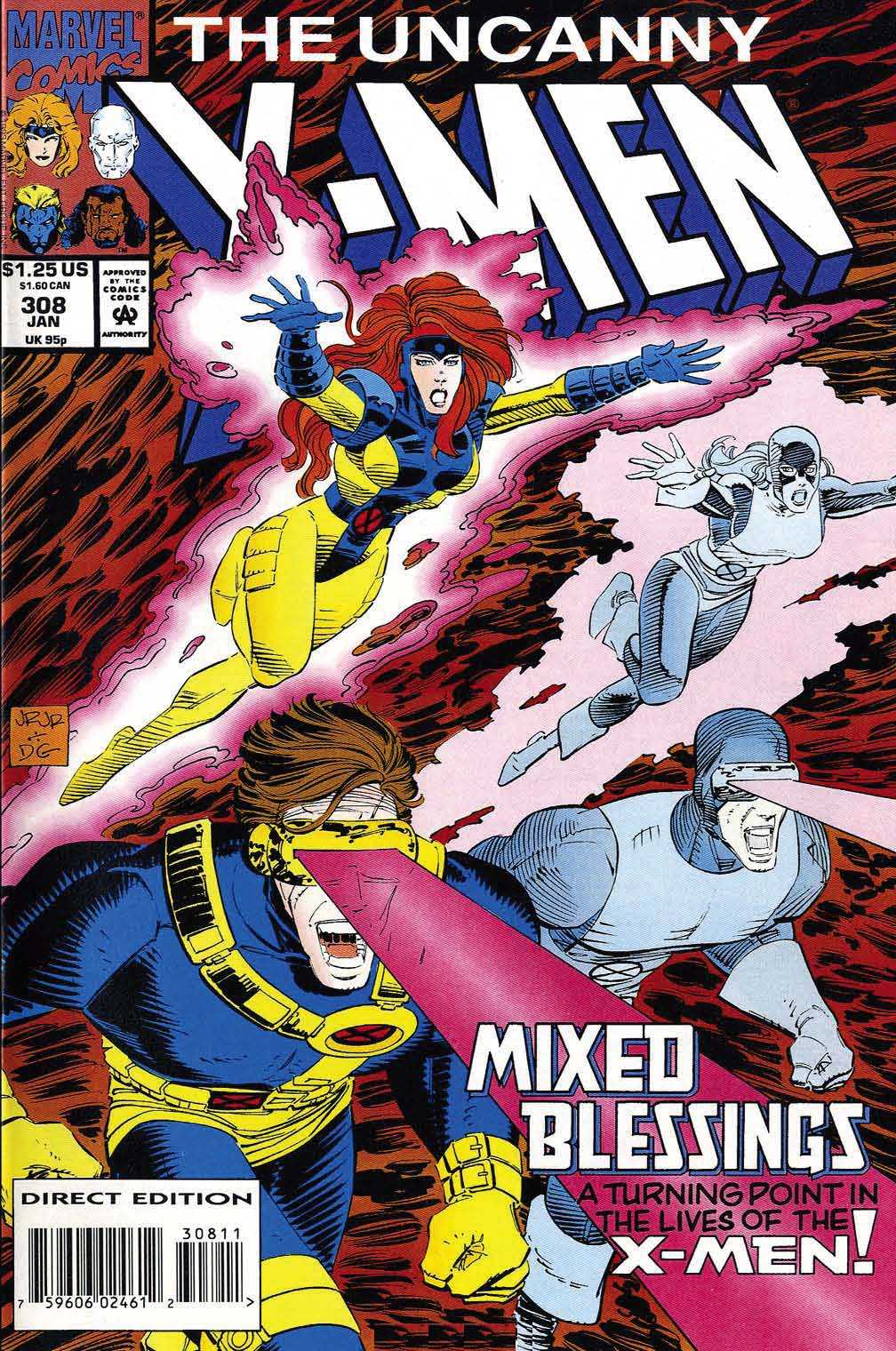 I first came upon this issue not long after it first hit the stands. For reasons that will become clear shortly, it wasn’t something that I, as a ten-year-old, would’ve found immediately appealing had I picked it up directly off the spinner rack. No, this most likely came packaged in one of those “grab bag” collections of like four comics having little in common beyond their similar publication dates. You remember these. They were fairly ubiquitous and inescapable at every Toys R Us, Wal-Mart, and Barns & Noble back in the day. Being both cheap and sustainable in their entertainment value, they must have been a godsend for every weary parent needing to placate a restless kid.

There’s not anything about this particular issue that stood out at the time, and it remains mostly unremarkable aside from being one of the few stories set at Thanksgiving that I can recall. Still, I never pass up an opportunity to ramble about the X-Men in any year, so let this serve as a curious time capsule to fulfill our objective. I’m going to slightly invalidate my premise right out of the gate by noting that this isn’t exactly a Thanksgiving-themed issue. Sure, it takes place on Thanksgiving and features a Thanksgiving dinner, but doesn’t really have anything to do with the holiday.

The plot, such as it is, consists of Cyclops and Jean Grey (She didn’t have a codename at the time. It got eaten by retcons and Women’s Lib.) reminiscing on the past and contemplating their future while the rest of the team goofs off in the background. We get an interesting interpretation of Jean’s telepathic powers, as the characters seem to be literally witnessing or revisiting the flashbacks in the same manner that they are visually presented to the reader. While these memories do hearken back to specific scenes from X-Men history, their content is new–this isn’t a clip show of material we’ve seen before.

These sequences are necessarily sappy, but not completely unbearable. Pretty much par for the course. Anyway, this all culminates in Jean asking Scott to marry her. Well, rather abruptly commanding him to, actually.

Scott is so taken aback that he wants to make sure he really heard what he thought he heard. Jean’s delivers the following immortal reply:

No, that’s not a botched scan or flubbed photoshop. That’s an empty word balloon, and it was indeed printed in the comic as such. Turns out this wasn’t an ill-timed foray into Dadaism either, but a production error. A subsequent letters match acknowledges the mistake and reveals the corrected version. Their explanation is dubious at best.

But that’s no fun. I like the version in which Jean inexplicably drops the mic and walks away. Given the tumultuous history between these characters, it’s hysterical to imagine Jean… what? Playing coy? And with so, ah, sensitive an issue. The original reading is just so ridiculous, unintentionally hilarious, and gratuitously mean that I can’t see it any other way.

The team is then summoned for Thanksgiving dinner among friends and family. Professor Xavier gives a speech obviously concocted on the fly expressing his thanks for the existence of the X-Men. Err, OK. These awkward sentiments go largely ignored by all in attendance, for fear of dwelling too much on the crushing misery of recent events. 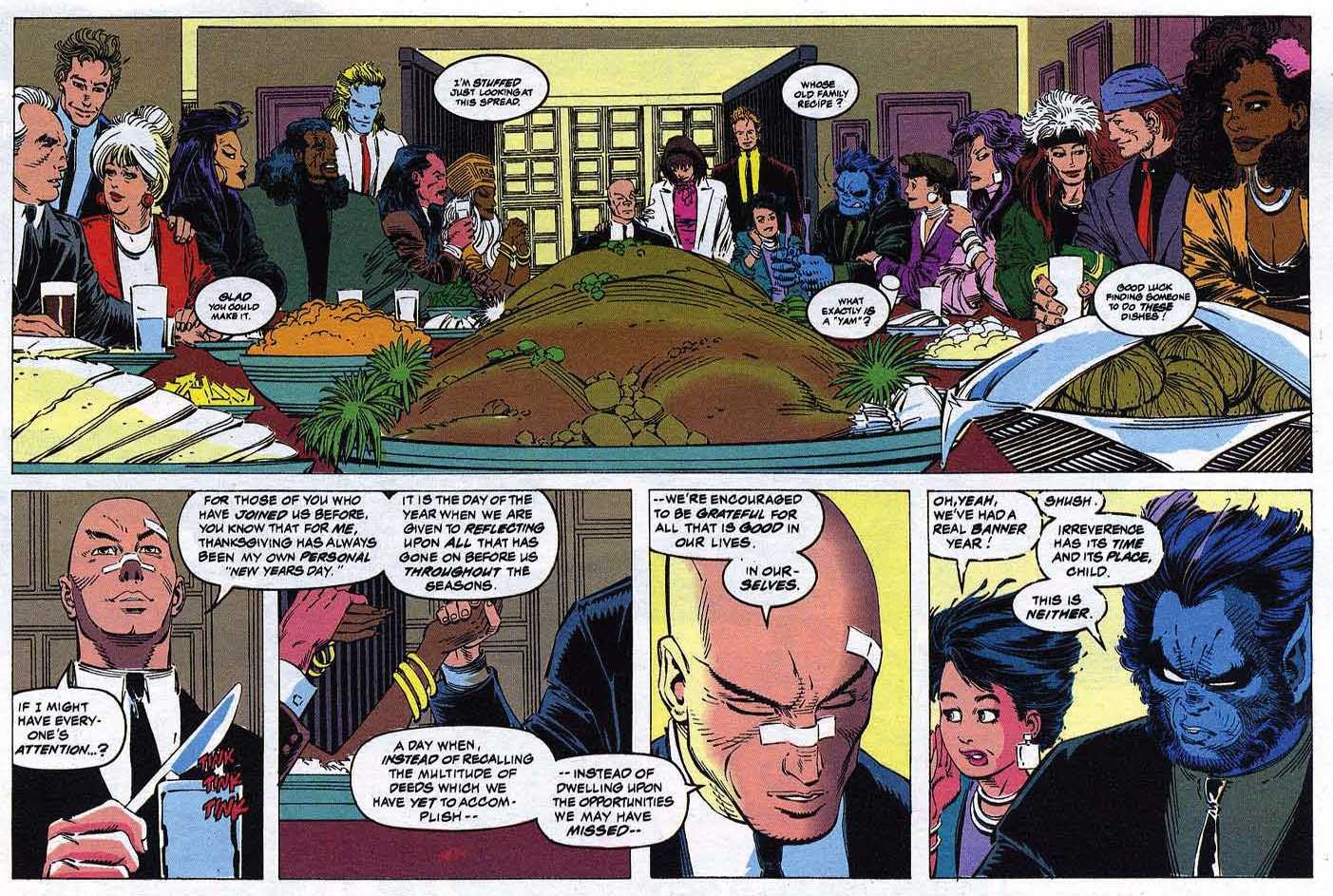 Scott and Jean then take this as an opportunity to make their big announcement and everyone pretends to be happy for them.

Oh damn. There’s real life intruding on my romanticized depictions of Thanksgiving dinner. That devolved in a hurry. At least Jubilee lightened the mood by getting a few quips in.