Pithiness aside, this was the type of issue Scott Lobdell excelled at. Quiet, stand-alone, character-driven stories are his stock-in-trade and he produced no shortage of them during his lengthy tenure as the flagship X-Men writer. I always thought Lobdell was a natural “introspective” author who was uncomfortably shoehorned into the role of superhero writer (which is not to say he’s bad at the latter). His best work is more in the vein of, say,  Jeff Lemire than Mark Millar. I don’t know if he has it in him to produce something to match the acclaim of Lemire’s Essex County, but I don’t think he’s really demonstrated his full potential either. As it stands, Lobdell’s reputation and close association with the X-books of this era precedes and dogs him, to a certain extent. That’s a shame, as he’s really quite better than he was ever given credit for. There really ought to be a collection of his best single-issue X-Men stories. I have no idea how Marvel would market it, who would buy it, what to call it, or what incentive they have to publish it, considering how much work Lobdell is producing for their competition these days. But still, it would make for a lovely read.

Anyway, these “downtime” issues invariably followed on the heels of a major crossover in order to serve as a breather and allow the reader to settle back in before the next big storyline. By 1993, however, the crossovers had become so frequent that this type of plot described basically every issue between big events. There simply wasn’t room in the publishing schedule for any middle ground, so the consequence of this endless loop of quiet-loud-quiet-loud storytelling was a considerable amount of tonal whiplash. In this case, we’ve got the Avengers team-up “Bloodties” immediately in our rearview and are looking ahead to “Phalanx Covenant.” Constraints of the calendar aside, Lobdell is on point here. And luckily for me, this gap between crossovers lands in November, providing an excuse for a holiday issue!

So from a historical perspective, this issue is part of a well-worn formula. That’s to take nothing away from what it accomplishes on its own terms as a poignant character piece with a gentle reverence for the past. It does mark a genuinely important development for Scott and Jean, albeit one that isn’t especially thrilling or surprising. Against the backdrop of that, it is nice to see the characters actually hanging out and enjoying each others’ company through angst-free interactions. Over the course of the previous four issues alone, they’ve had to contend with the death of Illyana Rasputin, the return of Magneto, the defection of Colossus, and the maiming/departure of Wolverine. Even by X-Men standards, they’ve had a rough go of it. Rather than sinking into despair, however, the issue chooses to highlight the team’s resiliency and optimism for a brighter future. These scenes fly in the face of what you conventionally think of when it comes to the X-Men in the ’90s, but they happened often enough to reinforce the sense of family and belonging shared by these characters and evident to any regular reader. It’s a necessary ingredient in order to justify why this team is so damn huge. They all live under the same roof and they all have a place at the table, simple as that. 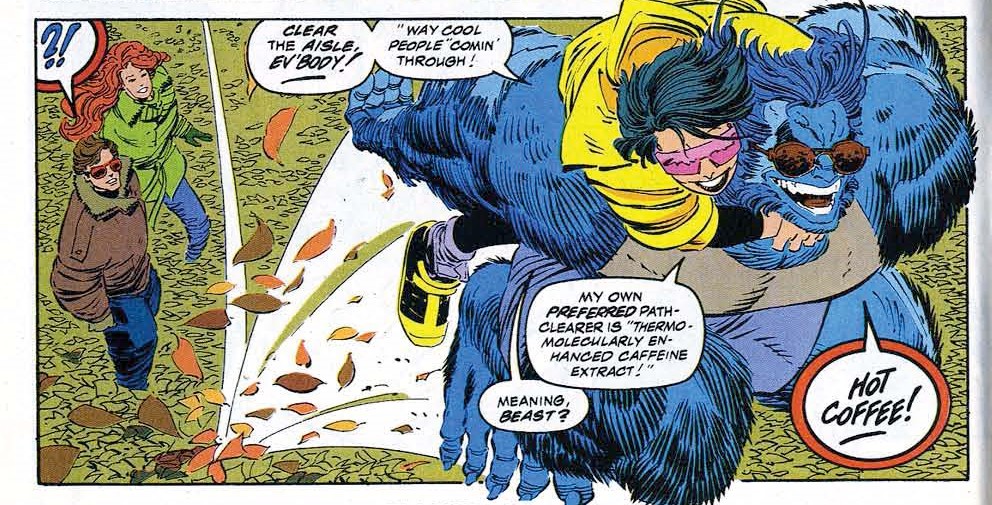 As a writer, Lobdell turns a corner himself. Far from the scab writer brought in to bang out scripts over the weekend, Lobdell now finds himself in the shadow of Chris Claremont, the legendary X-Men scribe of 17 years who preceded him. It’s not an altogether unfavorable comparison, but a monkey on his back nonetheless. Whether by editorial fiat or a bit of hero-worship on Lobdell’s part, the narration, voices of the characters, and overall the style of the book remain decidedly “Claremontian.” Among (many) other quirks, a staple of Claremont stories is the team bonding over a game of baseball. Here, they play an impromptu football game. On the surface, it isn’t much, but in an issue already loaded with callbacks to earlier stories, this can be viewed as Lobdell making a break with tradition and staking his claim. For better or worse, the book is his, and he’s in it for the long haul.

I can’t do much more but gush about the art. John Romita, Jr. actually cut his teeth on Uncanny X-Men a decade earlier. He may as well be a different artist in this second stint on the title. Opinions on Romita’s talents over the course of his long career are certainly varied, but I’m a fan of him in all his incarnations. Whether it’s his rather nondescript 1980s house style, the highly stylized cross-hatching we see here, or as the preeminent Amazing Spider-Man artist of the early 2000s, I really don’t care. Regardless, any version of Romita is a far cry from the showy, pin-up style artists typically associated with the X-books of this era. He had a blink-and-you’ll-miss-it uncelebrated run bridging the gap between regular pencilers Whilce Portacio and Joe Madureira, but Romita was a rock-solid anchor of consistency, always game for whatever was asked of him. However, this run especially feels like a case of the author writing for his artist, as Lobdell delivered a disproportionate number of stand-alone issues whilst paired with Romita. Whatever the case, the resulting stories are all the better for his presence.

Romita’s expressive renderings and natural body language are a perfect fit for this type of issue. He makes liberal use of double-page spreads without sacrificing any clarity in storytelling, allowing the pages to really stretch out and multitask in conveying the panoramic scope of the fall setting populated by a multitude of characters. You may not have experienced a freezing-ass cold Thanksgiving in upstate New York, but Romita’s pencils do an admirable job of getting you there mentally. It all adds up to this intangible quality that captures the perfect blend of melancholy and hopefulness called for by the script. No matter how his craft evolves, I’ll always think back on this issue and those of its ilk as quintessential JR,Jr.

So there you have it. My tribute to both Thanksgiving and the 20th anniversary of Uncanny X-Men #308! There, now it sounds less random. We’ll probably do this again once Christmas rolls around. I certainly have a lot more to choose from, not to mention a little more lead time in actually organizing a proper article. Any personal favorite? Drop me a line, and we can compare notes!