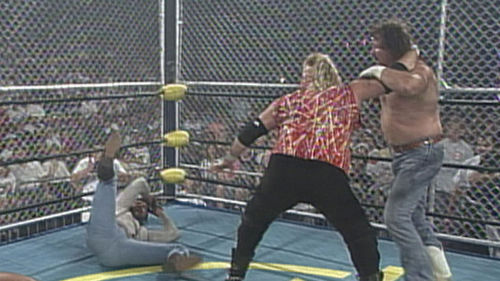 Hey there wrestling fans! Cowboy here with our weekly trip in the time machine. After enduring the brutally bad WrestleMania IX, I was excited for this week’s assignment. I love it when the Professor assigns me WCW stuff as I was strictly a WWF guy growing up. This week we head to lovely Roanoke, VA for WCW Fall Brawl 1994. Today marks the 20th Anniversary of this card, so it worked out really well for us. Looking at this card, I think we are in for a solid night of wrestling action… at the very least it CAN’T be worse than WrestleMania IX!  Let’s break it down.

Match of the Night:  Guardian Angel vs. Vader vs. Sting in a Triangle Match

I was looking forward to this match more than any on the card as it featured a couple of guys I am familiar with and lin Guardian Angel (Big Boss Man) and Vader and the legend I know I need to see more of (Sting). The match did not disappoint. I love the concept of the Triangle Match versus the Triple Threat. As fans we are treated to two high level singles matches and the fatigue factor always comes into play for the guy who has to fight twice. In this case, we open with Vader vs. Guardian Angel with the winner getting Sting. Each match has a 15:00 time limit with a 5:00 minute overtime and then “sudden death”, if a winner is still not decided. In sudden death, whoever is knocked off their feet first loses. Guardian Angel vs. Vader is an absolute slobberknocker and would’ve been just fine as a singles match on its own. These two big, burly, aggressive wrestlers take it to each other with reckless abandon. We look like we’re headed for overtime as neither guy seems to be able to gain enough of an upperhand to get a three count. Then Vader’s buddy Harley Race interferes and Vader gets the victory. Generally I am not a fan of these types of finishes, but for this match I’m OK with it. We all knew this bout was going to end with Vader facing Sting. Letting Guardian Angel get interfered with makes him look stronger than a straight loss and I feel that he deserves that after putting forth such a solid effort in this bout. Next up is Sting vs. a clearly winded Vader. Awesome, awesome match. They go back and forth for the full 15:00, and the 5:00 overtime, with each man getting multiple near falls and Vader spending more time flying off the second and top ropes than anyone his size should be able to. This leads us to the inevitable “sudden death” finale. Vader hits Sting with everything but the kitchen sink, but he won’t go down. The referee is outside the ring as Sting knocks the massive Vader off his feet. Then the Masked Man appears and drills Sting in the knee in the same fashion he had done so to the immortal Hulk Hogan. Vader gets up, Sting goes down, the referee is back in the ring and Vader is declared victorious! What a battle. Again, not a huge fan of the interference finish but the fact that it was the Masked Man and not Harley Race at least adds some intrigue. Overall, just a fantastic match. Give me this over your standard Triple Threat match any day of the week.

Unbelievable performance for Vader in this match. Not only was the match great…it was lonnnngggg. Vader, not exactly a svelte guy, was competing for the duration. At no point did he seem to tire and was even climbing up on the top rope toward the end of the second match. He showed great conditioning, tons of heart, and some serious wrestling chops. Granted, he scored a tainted win, but based on his overall performance in this bout, it was a well deserved victory.

Johhny B. Badd was new to me as I did not realize him to be Marc Mero until afterwards. The opening bout on this card was a matchup with Lord Steven Regal for the WCW Television Championship. Regal came out in full powdered wig and red coat attire which was interesting to say the least. Johnny B. Badd did not exactly impress me coming to the ring. I thought he looked a lot like Little Richard…not exactly high praise. My expectations were low given the entrances. I was pleasantly surprised. This was an excellent match. Both guys showed high level technical wrestling skills and the action was furious both ways. Johnny B. Badd even used the old Airplane Spin to great effect. After great action, Badd takes the belt! He seems genuinely fired up about it which I always love to see.  Great match, particularly for the first match on the card. The crowd was really into it and it set the stage well.

I’m assuming that the wrestling world didn’t react well to this when it happened and the vitriol, I’m sure, has done nothing but grow after Austin became a legend under a different promotional banner. While I probably didn’t despise this as much as the average fan, it still wasn’t great. My main beef is that we didn’t get to see Austin wrestle. I don’t have a huge issue with Duggan lifting the title…I’ve always been a big fan of his and the crowd seemed to really be behind him. What didn’t make sense was how short the match was. At least let them go at if for a few minutes before Austin takes the pin. If this was one of the things that pissed Austin off and caused him to jump ship, I completely understand it. Taking one move from “Hacksaw” and being unable to kick out doesn’t make you feel like Austin is the next big thing. This one certainly could have been handled better. 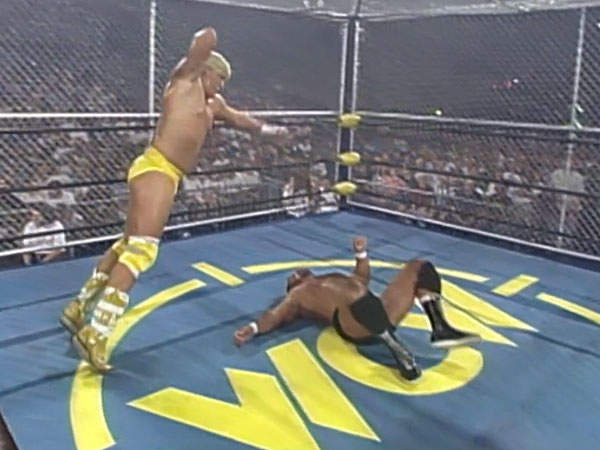 Thanks everyone for reading and be sure to check out the Place to Be Podcast’s full 1994 WCW retrospective series for more on this show!