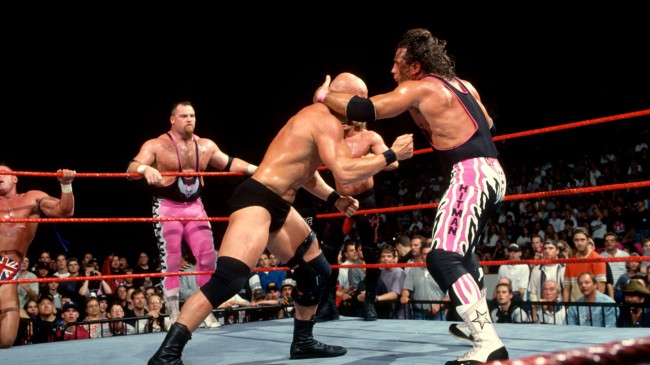 Howdy everyone! Cowboy here with this week’s edition of Cowboy Goes to Class. After last week’s Bash at the Beach ’99 debacle, I couldn’t wait for my most recent assignment to come through from Professor JR. Honestly, he could have had me review a regular season WNBA game from 2010 and it would have been leaps and bounds better than that farce of a WCW pay per view. Lucky for me, I was tasked with watching the WWF In Your House: Canadian Stampede show from July of 1997. Here are my thoughts:

Easy call this week fans. This five on five battle easily took the cake as Match of the Night and ranks right up there with some of the best non-singles matches I have ever seen. LOD, Stone Cold, the Anvil, and Bret Hart are all near the top of my personal list of  favorite wrestlers. The crowd was beyond into it (more on this later) and Stone Cold in particular was just awesome. He played the heel role perfectly as he must have given the Calgary crowd the one fingered salute at least a dozen times. The match had plenty of ebbs and flows and was very long. Some highlights were both Stone Cold and Owen Hart leaving with leg injuries and coming back, the whole Hart family getting involved from the crowd, an awesome superplex by the British Bulldog, Stone Cold putting the Hitman in the Sharpshooter, and finally Owen wrapping up the Texas Rattlesnake for the win. Everyone in this bout brought their A game and the crowd put things over the top. Even Ken Shamrock, who I was never a huge fan of in the squared circle, was good in this bout. The crowd is what really puts this card, and specifically this bout, over the top. These fans are simply awesome. Their love for the Harts and vitriol for Austin and the other Americans is evident from the second the first combatant is introduced. I love the beginning of the bout when they announce who I believe is the equivalent to the Governor of Alberta and Stu Hart gets a cheer that is at least 4x louder than the politicians. These are true fans that some of us in the states could take a queue from when we’re bitching about booking, results, etc. Just enjoy the show and root your guys on…that’s what it’s all about.

I couldn’t have created a better scenario for Austin to show off his unique ability to be a total asshole, but also command respect than this. He fed off the raucous crowd and seemed to genuinely be completely infuriated through the whole match. Every time he drilled Bret Hart and threw the two middle fingers in his face it felt right. They found the one venue versus the one group of opponents where “Stone Cold” could be the most hated man in the arena. If memory serves, his popularity had soared at this point and he was consistently cheered despite his heel ways in most of his matches. Not in this house. Austin’s persona was best suited for this type of atmosphere and he delivered in a big way. Even in taking the pin, he was my clear Performer of the Night.

Looking at the card I felt that this match would almost certainly have the least amount of action. Taker’s older bouts are very hit or miss for me and I felt that him up against another plodder in Vader had boring written all over it. I couldn’t have been more wrong. The two behemoths delivered a classic big guy vs. big guy masterpiece. They were both flying around the ring landing power move after power move. Taker finished off the big man with an impressive chokeslam and an even more impressive Tombstone…not a small feat considering the size of Vader. Overall this was a much better match than I anticipated and a solid title defense for Taker. On a lot of cards, this would have stole the show.

I hate to do this but I couldn’t come up with anything negative about this show. I loved the fact that there were so few matches (only four in total) and they were all fantastic. No complaints in this one from the Cowboy. 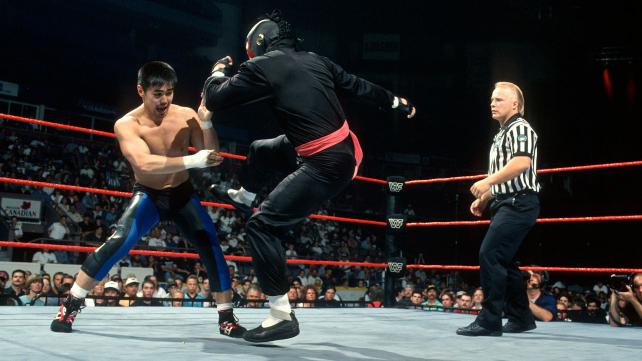