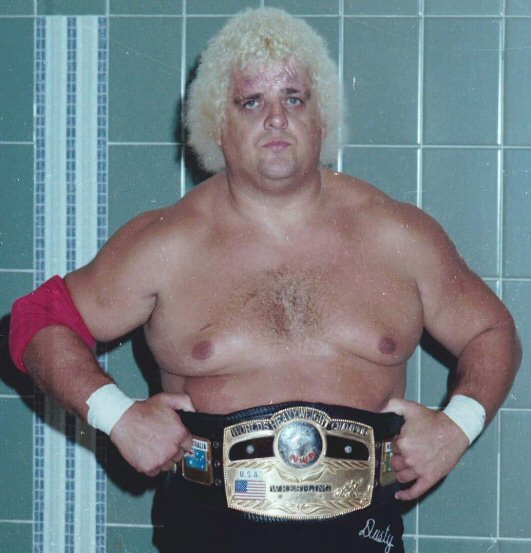 Charisma is not something you can learn at the performance center. A confidence and swagger has to be institutionalized into your soul for the charisma to be conveyed. Even beyond that, being charismatic and having that not overflow into seeming overconfident or cocky is a tight rope walked by few men. The American Dream Dusty Rhodes exuded those traits. Looking at his physique and build outside of the ring would make any individual wonder if he was a multi-millionaire successful wrestler or if he followed in his father’s footsteps and became a local community plumber. Dusty personified the American dream and captivated audiences of all races and social bearing for 30+ years.

Looking at the roadmap of Dusty’s career, it is striking the success he faced and the personality he was able to grip with the individuals of all generations and backgrounds. The Dusty Rhodes that was first watched and adored by me with his yellow polka dots and shilling “Sipp Cups” was a far cry in many ways from the Dusty that started out turning babyface on his partner Pak Song. Dusty was able to provide success in Georgia, Florida, Carolinas, MSG, Japan and everywhere else throughout his storied career. While certainly not the most technical wrestler, Dusty was a master of timing and delivered on the promos he promised by giving it his all and at least getting some nice Bionic Elbows in on any dastardly heel he faced.

My father-in-law carried his son to one wrestling event, Starrcade 1985. Dusty slapped hands with my brother-in-law and on the MARTA train ride home, he reminisced that he would never wash his hands again because Dusty had touched him. That is an incredible feeling and the type of emotion Dusty could conjure up. Many moments in life can be dealt with sadness and uncertainty, but Dusty gave everyone someone to believe in. His 1994 promo pleading for his son Dustin to accept him as his partner after Dusty was recently turned on by Arn Anderson is the best promo in wrestling in 1990s. Dusty carries a weight of believability. It is a feeling that you would be getting the same message from him whether it was in a 20,000 seat arena, on a front porch drinking lemonade watching the sun set, or shooting the breeze in a gas station. Dusty WAS Dusty and this was what he believed in. At points you may not always agree with what he says, but you know it comes from a genuine place. Perhaps Dusty was the best carny salesman of a wrestler that ever lived, but I still in an era of kayfabe being dead believe his message when watching old promos. I still become invested in his storylines and matches. I still can relate to the “Hard Times” he discusses.

Dusty has memorable feuds throughout his career but his greatest foil was Ric Flair. Flair and Dusty never had the best matches of each other’s career but they fit together like a glove. Flair, the overconfident playboy with money to burn. Dusty, the person that has had to work for everything in his life and who took nothing for granted. It was a match made in heaven and it personified much of Jim Crockett Promotions in the 1980’s. In addition, with the formation of the Horseman, this allowed Dusty to have long-standing feuds with other individuals of that faction for lengthy amount of times. Dusty was a brilliant babyface and worked as one almost exclusively for the last 25 years of his career.

Beyond Dusty the wrestler, Dusty has worn many other cowboy hats including booker, announcer and mentor. “There’s a lady in the bathroom” is a phrase known by almost all wrestling fans. This was candid Dusty in the announce booth and personified why he was so endearing in that role. Dusty again called it like he saw it. He wouldn’t know the name of every move, but he had a genuine sense of excitement that was contagious. I just recently watched Hulk Hogan’s heel turn at Bash at the Beach 1996 and both Dusty and Tony Schiavone were fantastic on the calling of that action. Dusty was booker during most of the hottest stretches in the NWA in the 1980s. He provided some forethought for some groundbreaking tropes still seen in wrestling today like the factions (Four Horseman) and blowoff gimmick matches (WarGames). Later in life, Dusty helped mentor and guide individuals as they were employed in WWE including Rob Naylor during his stint with Florida Championship Wrestling.

This brief history shows Dusty’s many accolades and yet at his core, he was still a common man. A workman that would earn what he was striving for inside the squared circle. Dusty can be looked at as a role model and hero and will be a great loss to the wrestling community.