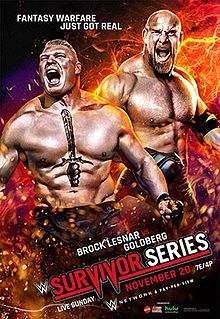 On Nov. 20, WWE presented the 30th annual Survivor Series. Now that the show has finally aired, let’s see how the show stands up against the previous years.

The main event was called a mega-match, but it was more of a mega-disappointment…

I was really looking forward to this show. Three traditional Survivor Series elimination matches were scheduled with 6 matches total on a four-hour card, I was really hoping we would see some lengthy contests that let the talent involved stretch their legs and put on a great show.

That is… not… what happened. Two of the three elimination matches went less than 20 minutes and the main event between Brock Lesnar and the returning Bill Goldberg went less than 90 seconds! For all the hype for this main event, we saw more of the match between the video game counterparts than the actual guys. It was a real throwback to Goldberg’s WCW winning streak, where he nailed some poor shlub with a spear, hit him with a jackhammer and pinned him. Lesnar was a little tougher. He needed TWO spears! Having Goldberg win so quickly – even though he hasn’t a pay-per-view match since 2004 – wasn’t a problem, but putting it on last after all of that build-up, was a bit of a let down. I would have been much happier if the 5-on-5 men’s match went on last.

And writing about this match took longer than the match itself…

This was the match that was given the most time to develop into something special, giving the fans some iconic moments in the process. Everyone in the match got a chance to shine and to advance whatever story they have going on. The highlight was easily the reunion of The Shield, when the eliminated Dean Ambrose came back out to attack his partner and rival, WWE Champion AJ Styles, and his brothers-in-arms Seth Rollins and Roman Reigns fought off the security guards trying to restrain Ambrose and nailed Styles with a patented Triple Powerbomb. Styles’ elimination was followed up with Reigns hitting Shane McMahon with a spear off of Shane’s Coast-to-Coast attempt, which seemed to legitimately knock him goofy.

I got a little concerned when Reigns was the last man left on Team Raw against Bray Wyatt and Randy Orton, It seemed like WWE was going to repeat the mistakes it had made for the last two years and put Reigns over everyone, but they made the smart move and had Wyatt go down to a Sister Abigail. We’ll see what the next few months have in store, but the match delivered better than everything else on the card.

Worst Match: Brian Kendrick (c) beat Kalisto by DQ – Cruiserweight Title match. The cruiserweight division that WWE has created since the WWE Network-exclusive tournament has been another disappointment, and building it around TJ Perkins and Brian Kendrick has been a terrible move. The idea of moving the show to SmackDown! Live if Kalisto won the title would have maybe given the division the shot in the arm it needed. It seemed like a sure thing, especially with the new Network show 205 Live airing on Tuesdays. But logic went out the window here, as Baron Corbin came in and caused the disqualification. The match never really felt like it got going and Corbin’s interference just seemed useless.

Biggest Disappointment: In 1987, the 10-on-10 tag team elimination match went 37 minutes. In 1988, the match went 42 minutes. The length of those matches allowed everyone a chance in the spotlight and the story of the match created some great matches. The first time WWE offered a 10-on-10 tag team elimination match since 1988 didn’t come close to meeting expectations. At less than 20 minutes, the match fell victim to the classic elimination match blunders from years past: quick eliminations, lots of hot spots without the needed psychology to make everything work. And giving the win to the “wacky tag team partners who hate each other” Sheamus and Cesaro really didn’t do anyone any favors. I would have much preferred having the match be a showcase for American Alpha or even Gallows and Anderson would have been nice. Instead, The Usos were the last team on the SmackDown! Live said. It seemed to be another questionable booking decision.

Feuding Females: The women’s elimination match was a much better-booked match than the tag team contest, although it started off wonky, with Nikki Bella being attacked and unable to compete. SmackDown Team Coach Natalya took her place and the backstage segment seemed to indicate that she was the one who did the attack, but who knows where they’ll go with it as of writing this the morning after. SmackDown Champ Becky Lynch looked great getting Nia Jax – who was throwing everyone in the match around – to submit and Raw Champ Charlotte and Bayley came through with the win. And Charlotte attacking Bayley to set up a feud bodes well for the future.

No Stakes: All three elimination matches were SmackDown! Live vs. Raw matches, and both Stephanie and Shane told their respective teams that there would be consequences if their team lost. But there were never any stakes introduced to the matches. Maybe if the winning teams got the 30th spot in the Royal Rumble or a draft pick for their roster, it would have given a sense of importance in the moment. But looking back at the show in the future, this may be less of an issue.

Here’s your definitive list through this year. No, nothing from the 2016 show made the top.

The Viper comes through with one more elimination, and he now ties Shawn Michaels for the top spot. Maybe next year, he can be the top guy!