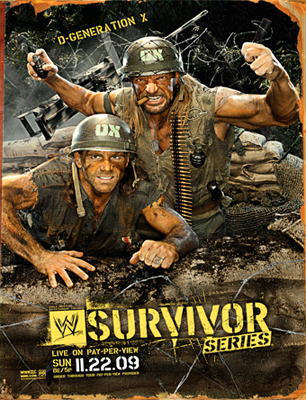 This time around, our two world champions are pitted in Triple Threat matches against tag team challengers!

WWE tried something new this time around, putting their two world champions into triple threat title defenses, stacking the decks against the champions because their opponents were established tag teams. We’ll get to the WWE Title match in the next segment, so let’s focus on the World Heavyweight Championship. The Undertaker defended his title here against the Unified World Tag Team Champions, Jeri-Show (Chris Jericho and Big Show, if you couldn’t figure that out). Big Show screwed the Raw brand over at the Bragging Rights show for a shot at the title, with Jericho later being added to the match after defeating Kane. That set up an opportunity for the tag team champions to work together to take out the World Heavyweight Champion and give one of them the title.

In theory, of course. It never works out in practice. Jericho and Show couldn’t keep things together and The Undertaker managed to knock Big Show out with Hell’s Gate for the win. If you can’t work together, you’re not going to make it very far. Just ask Degeneration X…

The opening of this match is almost enough to thrust it into one of the most iconic moments of Survivor Series history, as John Cena prepared to defend his title in a Triple Threat against the members of Degeneration X. The bell rings and WHAM Shawn Michaels hits his bestest buddy Triple H with Sweet Chin Music, taking him out of the match for a spell. Cena’s jaw drops, everyone goes crazy! No one saw it coming. Of course, it’s a tactical error from Shawn, who could have double teamed the champ with his partner, ensuring one of them walked out with the belt, but whatever. It was an awesome moment. The rest of the match keeps up with the fun, which should be no surprise considering who was in the ring.

Just a formulaic match meant to give the women something to do. Nothing horrible but nothing special, either. Had I completely missed the match, it wouldn’t have affected my enjoyment of the card one way or another. Probably the most notable part of the match was Jerry “The King” Lawler on commentary saying, “I like two kinds of Divas, foreign and domesticated.” Stay classy King. Mickie James and Melina manage to survive.

Build Him Up: Why do you build him up (build him up) WWE, just to let me down, and mess me around? Survivor Series 2009 should have been a coming out party for Kofi Kingston. Involved in a feud with Randy Orton that actually gave the former Jamaican some HOT FIRE on television, Kingston looked like a star fighting Orton, even coming up with a sole survivor win here at this show, pinning CM Punk and Orton in succession after being left alone against the two former World Champions. The video package before the match felt epic, using the same stock music used on the Buffy the Vampire Slayer Season 7 DVD menu screens. Totally epic. It’s too bad this didn’t thrust Kofi into the main event picture, but I guess he did OK for himself in the end.

Odd Man Out: During a backstage interview promoting Team Kingston vs. Team Orton, the fivesome of Kofi, Mark Henry, MVP, R-Truth and Christian discussed the match when Captain Charisma expressed some concern that he was a little … different from his teammates. Over the objections of the other four, Christian became relieved that his being the only one from ECW wasn’t a problem. He even got a rap in: “Team Kofi Kingston is gearing up to fight/Four of us are black, one of us is white/What’s up?” Christian was always great in these interviews when he’s allowed to be funny.

Friends Forever: Well, not so much. Stemming from a World Heavyweight Title Fatal Four Way at Bragging Rights, where Batista had The Undertaker pinned but Rey Mysterio broke it up, hoping to win himself, the two former besties went at it here after Batista viciously assaulted Mysterio. Batista felt betrayed that Mysterio wouldn’t let him be champion and yelled, “I THOUGHT YOU WERE MY FRIEND!” at the diminutive superstar. To stress how close the pair were, commentator Matt Striker announced during the match that “Batista is one of the few people to see Mysterio without the mask.” We’ll disregard, obviously, the millions of people who saw Rey without the mask during his WCW run… No one ever said Striker made any damned sense, I guess.

Our first new addition to the list since 2003! Huzzah! Of course, this new addition kicks the 2003 entry OFF the list, so…

Randy Orton continues his climb up the list and Christian makes an appearance, tied for the final spots in the Top 10.