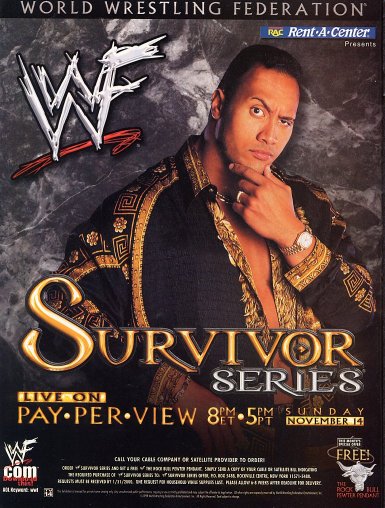 This time around, we get a Triple Threat for the WWF Title and a mystery man commits vehicular assault!

The Survivor Series has a long history of substitutions, and in 1999, we got a major substitution in the main event. The show was advertised with a triple threat for the WWF Title at the top of the card, with WWF Champion Triple H defending against The Rock and “Stone Cold” Steve Austin, the two biggest stars of the Attitude Era. But Austin was injured and wasn’t going to be able to wrestle. That didn’t stop the WWF from advertising him, but they needed to come up with a way to get him out of the main event.

After Triple H lures Austin into the back for an ambush from Degeneration X, Austin gets run over by a limousine racing through the backstage area. Who was driving the limo? Triple H and the gang swore it wasn’t them, because the degenerates wouldn’t stoop so low as to commit a hit and run. It would be a bit before we found out that Triple H had directed Rikishi to “Do it for the Rock” … or something… Attitude Era story arcs can get a bit convoluted.

Whatever the reasoning, or the resolution, we needed a replacement for Austin in the main event. Who would it be? Could it be Test, who was dating Stephanie McMahon at the time and seemed to be in line for a big push? Or maybe the recently-debuted Olympic champion Kurt Angle? Or maybe the McMahons lured a big name over from WCW to take part? Nah. It was the Big Show. Sure, Show had been in the WWF for less than a year, but the bloom had already come off the giant rose, as Show was firmly entrenched in a feud with Big Bossman, and had beaten Bossman’s team 1-on-4 earlier that evening.

So, of course, Big Show pins Triple H after Vince smacked the champ with his own title belt. What a weird way to go.

Best Match: Bob Holly, Crash Holly and Too Cool defeated Edge, Christian and the Hardy Boyz. For the most part, nothing was terrible this year, but nothing really stood out, either. But the match featuring the Hardy Boyz and Edge and Christian teaming up one month after competing in a ladder match at No Mercy 1999 for the services of Terri is a pretty significant moment. Even the Holly cousins were entertaining in the match, arguing as they tried to put away members of the opposite team. Sure, Scotty 2 Hottie and Grand Master Sexay were somewhat annoying, but Jim Ross teasing Jerry Lawler about his connection to his son, Brian Christopher, which Lawler wasn’t acknowledging, made for some entertaining commentary.

Worst Match: Tori, Debra, Fabulous Moolah and Mae Young defeated Ivory, Luna Vachon, Jackie and Terri – Sudden Death 8-Woman Tag Match. “Sudden Death” here means it was a one fall to a finish contest, not that Moolah or Mae Young had to keel over for the match to end. It could have gone that way, and you know it. At just under two minutes, the match is about two minutes too long.

Gold Medal Debut: Your Olympic Hero, Kurt Angle, made his in-ring debut at the 1999 Survivor Series, between Shawn Stasiak with an Olympic Slam. Even in his first match, it was clear Angle was going to be something special. And by the time the 2000 edition rolls around, he’ll be defending the WWF Title. Yelling at the crowd that, “You don’t boo an Olympic Gold Medalist” was pure awesome.

Going Nowhere: The opening elimination match, pitting the Acolytes and the Dudleys against Godfather, D’Lo and the Headbangers was a lot of fun, with the Headbangers and D’Lo dressing as Pimps to go along with their team captain. The match also featured the Dudleys and the Acolytes going at it and costing their team the win, which I would have expected to lead to a match at the December pay-per-view, Armaggeddon. Alas, that show featured a No. 1 contender tag team battle royal. Sure, both teams were in it, but it really should have set up a face-off between the two teams.

No Sex Change?: During the Intercontinental Title Match between champion Chyna and Chris Jericho, Jerry Lawler repeatedly reminded the home audience that Jericho said he would get a sex change operation if he lost to Chyna, declaring that Jericho would “become a broad” after losing. More false advertising… Of course, between that, the Hos with the Godfather, Lawler screaming “Puppies!” and X-Pac disparaging Kane’s mental capabilities, there’s very little extra-curricular activities on this show that would be acceptable today.

Third year straight of no changes to the Top 10.

A slight gain this time around, as British Bulldog makes his way into the rankings.