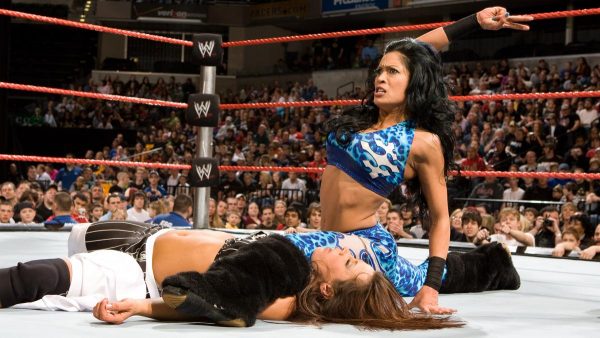 Today’s subject is someone who was once described by no less than Bret Hart as the best wrestler in the world. Of course I mean Melina. Bret naturally copped quite a bit of stick when he said that, but honestly, at this point… I think he might have been right. Just for a different reason than he gave.

Bret liked Melina because she had cool movez and he’s a dork for cool movez. Which is fine, by the way, I’m certainly not in a position to judge anyone else’s taste in wrestling. You do you, Bret. Melina did have some innovative offense, and did use her incredible flexibility to create some awesome visuals – we all remember when Beth Phoenix made her kick the back of her own head right? Melina did a lot of cool stuff in the ring, and I like that about her, but that’s not what I love about her.

I fell in love with Melina when I went through 2007 and realised she was the baddest motherfucker on the planet.

No kidding. It’s nuts. SHE is nuts. Melina was never one of my favourites before this, but now I am like, all in. Bruiser Brody in his wildest dreams wasn’t half the crazy brawler that this woman was.

When she starts wrestling full time and gets the title push in early 2007, the entire women’s division lifts and becomes surprisingly violent when Melina starts beating the BEJESUS out of everyone in sight. Brawling and punching and kicking and scratching and clawing and screaming and hair pulling, my GOD the hair pulling! I ain’t talkin’ some Fabulous Moolah hair mares here, this was brutal, violent, rip all the hair out of your head and slam you on your face stuff. This ain’t yo grandma’s hair pulling, is all I’m saying.

Melina would go on these rampages, and so whoever she was wrestling had to fight back, lest they be killed, and suddenly every other Divas match on Raw was a three minute fight to the death. Suddenly poor, sweet girls like Maria or Candice Michelle are in there with Melina scrapping and throwing down – because they had to! She did such a great job bringing that kind of intensity out of a lot of the girls. And then when she was in there with someone like Beth Phoenix or Mickie James… it was ON.

Mickie and Melina allegedly had quite a bit of heat with each other at the time, going back to OVW days I think. (I vaguely remember blog posts and stuff like that, but I mean it was 2005, we all had livejournals, no judgment.) Anyway, I only mention this to say that I have absolutely no problem believing that they had beef, because when they wrestled it looked like they legitimately wanted to kill each other. They would have a staredown and like… sparks would fly. Lasers would shoot out. Small fires would break out nearby. And then they’d get in and try to murder each other in three minute Divas matches.

It was such a great feud, filled with some nasty wrestling matches. I recommend the main ones they had fighting over the title in early 2007, which will be listed below. The first two are straight matches that blew my tiny, little mind with their intensity. Then they had the first ever women’s Falls Count Anywhere match on Raw – WWE may claim it was Sasha Banks and Charlotte, but it was in fact Mickie James and Melina going nuts here, and it ruled. Then they had a PPV title match at Backlash which is still one of the best women’s matches in company history. Watch it. Watch it all.

Even beyond that, again, you can just feel the hatred radiating off them whenever they wrestle. Long after their title feud is over, when Mickie and Melina are ever in a tag team match, or a battle royal, or doing anything in the same ring they snap together like magnets and continue to pummel each other like the feud had never stopped.

There was a battle royal about six months after their feud ended where Melina sacrificed herself just to eliminate Mickie. THAT is how strong the hate was. Even after Melina eventually turns babyface in 2008, the first time her and Mickie are put in a tag team match together they clearly hate it and don’t trust a bar of each other. A whole year later! The storyline was over but these girls were working their own damn angle. It wasn’t until December 2008, a full 18 months after their feud ostensibly ended that they were able to team up and be friendly. Talk about selling it, in a world where hardly anything matters a week after it happens.

Another aspect of Melina’s run in 2007 that I want to talk about is a cool little thread of detail I happened to find running through the length of it. Make sure your oxygen tank is full and your goggles are on properly, this is going to be quite a deep dive into some wrestling minutiae.

They key thing to know is this: Melina held the Women’s Title for about six months in 2007 and in that whole time she didn’t actually have a finisher.

I mean, she may have technically had a finisher on paper for all I know, but she certainly didn’t use one to win all her matches. All of her matches did end the same way, but they also all ended differently – bear with me while I explain.

In every match of hers, there was always a pivotal moment late in the game that created an opening for Melina to win, and she would always capitalise on that moment. Something would happen – she’d knock her opponent off the top and they’d crash and burn, or they’d take a bad bump or a head knock from something, or she’d nail one of her moves in a big way, or she’d have a chance to cheat behind the back of the referee. Whatever it was, something like that would happen and Melina would pounce. Not literally hit The Pounce~! (that would be cool though) but she would roll them up straight away, or hit a big move and finish them off. It was a different finish every time, but she would ALWAYS capitalise.

At the time Edge had the ‘Ultimate Opportunist’ gimmick in terms of booking, but Melina was actually working that idea in terms of wrestling every week in the ring. It was fascinating to watch it unfold.

And the great thing is that it even got paid off! 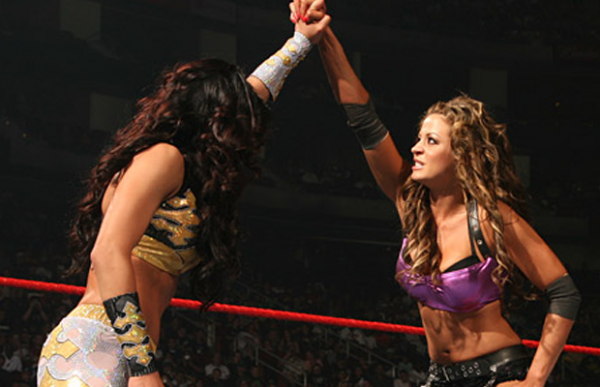 The summer of 2007 is when Candice Michelle got her big push, and the story of her title chase was that she had Melina’s number. She pinned her on Raw a couple times, and Candice even won the non-title Pudding Match at the One Night Stand PPV (I know, I know). So Candice is on a roll, and gets her title shot at Vengeance. Naturally there is a point late in the match where something happens and that window opens up for Melina: after Candice makes a comeback Melina manages to poke the eyes and hit a wacky Rude Awakening-type move and Candice is down and out. But Melina can’t capitalise! She tries to pin her but they’re too close to the ropes and she has to waste time dragging her out and Candice kicks out and the whole moment has come and gone.

I’m sure it just looked like a random messed up two-count to everyone else, but when I saw this happen I LOST MY MIND.

Because I knew that THAT was the moment Melina was looking for, and for the first time she couldn’t convert it into a victory. Candice wasn’t going down in the same way that everyone else did – Candice had her number. And sure enough, Candice recovered and won the match. And that’s how Melina lost the title.

I never knew it was actually possible to fall in love with an awkward looking pin cover off of a neckbreaker, but I am so madly in love with this moment it hurts. It’s so nice when you find a beautiful little detail and you feel like you’re the only one who can see it. It’s the kind of detail that you can only appreciate if you watch wrestling with as much… fervour as we do. I am on some Pro Wrestling Only type ish right now. (Cheap plug for the new PWO site! Yeah!)

I may need to revisit Melina again in the future since so many of her best matches came after 2007. But I really wanted to explore this run of hers in some depth because it completely blew me away and made me a super dooper Melina fan.

Next week I will tell the tale of how I became a super dooper fan of someone else, someone who is about to make a surprise leap back into the wrestling spotlight. Stay tuned.