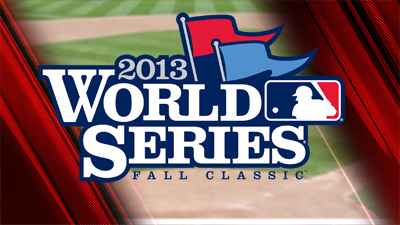 As October reaches its final weeks and the autumn chill permeates with the sound of football, and the gearing up of hockey and basketball, the Boys of Summer still have one last thing to say before giving way to the Hot Stove League of another winter. That of course is the 109th edition of the World Series, which will feature the St. Louis Cardinals vs. the Boston Red Sox.

It has been another solid baseball season, and the Postseason has again provided some memorable moments and great play that makes October Baseball one of the best annual events in sports. The Red Sox rebounded rather nicely from the Collapse of 2011 and the dismal failure of 2012. Of course removing big contracts for some massive payroll flexibility did help in that regard, but with first year skipper John Farrell taking over for Bobby Valentine, the Red Sox rebounded back to their previous winning ways, winning an AL best 97 games and their first AL East crown since the 2007 World Championship season, and their first postseason appearance since 2009.

Their ALDS matchup was against the franchise that had been making the most noise in the division since 2008 to break up the Yankee-Red Sox dynasty of AL East dominance since 1999, the Tampa Rays. The Rays had an impressive run to get to October, as they had a long road winning streak to end the season, and forced a one-game playoff with the Texas Rangers, and would then defeat the Cleveland Indians in the Wild Card playoff game, both games at home. However, the Rays would hit the Red Sox buzz saw, and would lose in 4 games.

The other side of the American League Bracket saw the Central Champion Detroit Tigers and the Western Champion Oakland Athletics have a pretty darn good 5 game series, with the Tigers coming from a 2-1 series deficit to win on the strength of a Justin Verlander and Joaquin Benoit combined 3-hit shutout in Game 5. The Tigers would draw first blood in the ALCS with a combined one-hitter in the first game, and perhaps an early indication of problems they’d have later on as Jim Leyland used 4 relievers to get through the last 4 innings of the game!

The Red Sox then took control of the series by winning the next game, and the first one at Comerica Park, the latter was a 1-0 victory as John Lackey and three relievers bested Verlander. The Tigers would tie the series in Game 4, but the Red Sox would win Game 5 and finished the series off with a Game 6 win at Fenway. With 3 saves, giving up no runs on 5 hits and striking out 9 in 6 innings of work, closer Koji Uehara would pick up the series MVP.

On the National League side, the St. Louis Cardinals returned to the top of the NL Central, for the first time since 2009, which is the franchise’s 8th which is the lead amount in the 20 year history of the division. Their postseason run continues a three-year streak that started with the 2011 World Championship, and continues a stretch where the Cardinals have been in 10 postseasons in the last 14 years.

Their run to the Fall Classic started against the surprise team of the postseason, the Pittsburgh Pirates, who battled the Cardinals all year-long for the division, but were still able to achieve their first postseason appearance since 1992. The Pirates entered the NLDS by defeating the Cincinnati Reds in the Wild Card Play In Game, and then managed to take a 2-1 series lead over the Cardinals, but the Redbirds took Game 4 in Pittsburgh, and Game 5 in St. Louis to move on.

Their LCS opponent would be the Los Angeles Dodgers. The Western Division champions had defeated the NL East champion Atlanta Braves in 4 games.

The Cardinals would take a 2-0 lead, heading into Game 3 in LA, which the Dodgers would win, but the Cardinals would push the Dodgers to the brink with a win in Game 4. The Dodgers would stave off elimination in the Dodger Stadium finale, but rookie Michael Wacha threw a 2-hit shutout in Game 6, back in St. Louis to wrap up the series. Wacha would earn the NLCS MVP award on the strength of his performance in both Game 6 and Game 2, where he also did not give up a run. Scattering 7 hits and striking out 13 in 13 and 2/3rds innings, Wacha certainly has added his name to the long list of postseason heroes for the Cardinals. 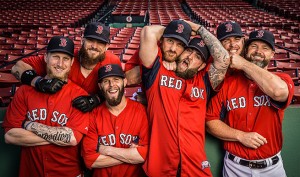 And so, the Series is set to begin this Wednesday in Boston, Randy Orton’s home team vs. a team that would make Daniel Bryan proud with their facial follicles! The Bearded Bunch does boast a solid lineup and staff, helped by a few remaining stars from the 2004 and 2007 run like Dustin Pedroia, Jacoby Ellsbury, David Ortiz (the last of the 2004 team), Jon Lester, and Clay Buckholz, along with brining in solid supporting pieces such as Mike Napoli, ALCS hitting star Shane Victorino and Uehara.

While the Cardinals have once again retooled and reloaded to continue their current run. While several key components still remain from the 2006 and 2011 World Champions, including Yadier Molina, Matt Holiday and Adam Wainright, they’ve been able to plug in holes with the likes of Matt Adams and Matt Carpenter from the system, and free agent signing Carlos Beltran, who has continued his postseason success this October. Also their bullpen has been one of the most effective in baseball this season.

Historically, this is the 4th time the two franchises have met in the World Series:

1946 the Cardinals won in 7 games. It was the Red Birds 4th appearance in the Fall Classic in 5 years, and their 3rd championship. It was also the only World Series appearance for Ted Williams.

The series is most known for the series winning play in the bottom of the 8th of Game 7. With the game tied at 3, Cardinal outfielder Enos Slaughter scored all the way from first, in what would be known as “Slaughter’s Mad Dash,” on a two-out Harry Walker double for what would be the winning run of the game and series.

1967 was also a 7 game series, and again it would be the Cardinals coming out the victor. The Cards were in midst of another mini-dynasty as they defeated the Yankees in 1964, and would repeat as NL Champions in 1968. Meanwhile the Red Sox were in midst of “The Impossible Dream” season which pretty much is what today’s Red Sox Nation is built upon as the Sawx have been a preeminent franchise since that magical summer.

The series itself though, was the Bob Gibson Show, as the Cardinal legend won 3 games, all of them complete starts, and had a 1.00 ERA with 26 strikeouts en route to a second World Series MVP award.

And finally 2004, the Cardinals were the rather anticlimactic opponents for the Red Sox to finally vanquish their franchise’s 84 year drought without a World Championship. While both teams had epic 7 game encounters in the League Championship Series, the World Series was a 4 game sweep by the Red Sox. Amazingly the Cardinals never even took a lead in any of the 4 games!

It is also interesting to note, that since the adding of a third division winner and a Wild Card slot to the postseason that this is only the third time that the teams with the best records in both leagues have matched up. The first year was 1995 when the Atlanta Braves defeated the Cleveland Indians in 6 games, and the Braves were involved in the second time it occurred, though the 1999 Braves were swept by the New York Yankees.