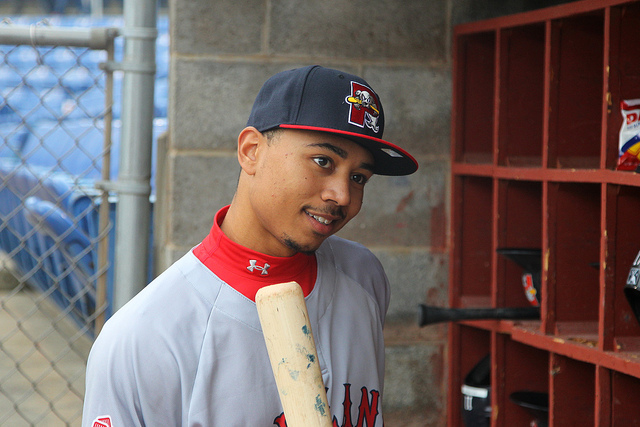 Mookie Betts was drafted by the Boston Red Sox in the 5th round of the 2011 Amateur Draft. 17 shortstops were selected before him. This year, Mookie Betts has become the talk of the minor leagues. Most people assume that any prospect gets better with professional seasoning, but very few prospects see statistical improvement as they rise through the ranks. Mookie Betts has done just that. At 19 he hit .267 in the NYPL, a college draftee league; this was the only league that he had an OPS below .850. In 2013, At 20 years old with Boston’s High-A affiliate, the Salem Red Sox, Betts hit .341 and struck out 57 times in 551 plate appearances between the Red Sox’s A and High-A farm clubs. For perspective, when Joe Mauer (the first overall selection in 2001) was 20 years old he struck out 49 times in 571 plate appearances between High-A and AA. At the beginning of the minor league season, Betts was modestly ranked as the 62nd best prospect by MLB.com. It took only 54 games with the Portland Sea Dogs before Betts was promoted to Pawtucket, and it is hard for most baseball people to believe that Mookie Betts will not be in a Boston Red Sox uniform by August (before rosters expand). Prospects tend to rise quickly in most second division teams’ farm system. Impressively, Betts has surpassed first-round selection Deven Marrero (Portland) and looks to supplant first-round selection Jackie Bradley Jr. as the everyday center fielder. This is not to detract from the professional careers of Marrero and JBJ, more to explain how impressive Mookie Betts has performed the past two years.

Mookie is impressive beyond his mind-boggling statistics, as scouts rave about his raw athleticism. One scout said that he looks like “Allen Iverson on a baseball field.” He is a natural runner who makes baseball look easy. Another scout noted that he could play any number of positions due to his great feel for the game. His hands are well above average both in the batter’s box and defensively. His solid bat speed and plate coverage are the type of tools you see in most top prospects, but his advanced hitting approach is what makes him even more valuable to an organization, such as the Red Sox, that values a hitter’s ability to reach base safely. He possesses a surprisingly powerful bat. Betts squares up the majority of strikes he sees, and works inside the baseball. This generates consistent backspin and lift, leading one scout to say, he could hit 25-plus home runs in Fenway. On top of all the production and physical tools, Mookie Betts looks like a game changer who can affect the outcome of a game with his speed, defense, or bat. At worst, it looks like the Red Sox have a super utility guy who can play multiple positions. If he finds an everyday position, Mookie Betts could be a multiple-time All-Star.