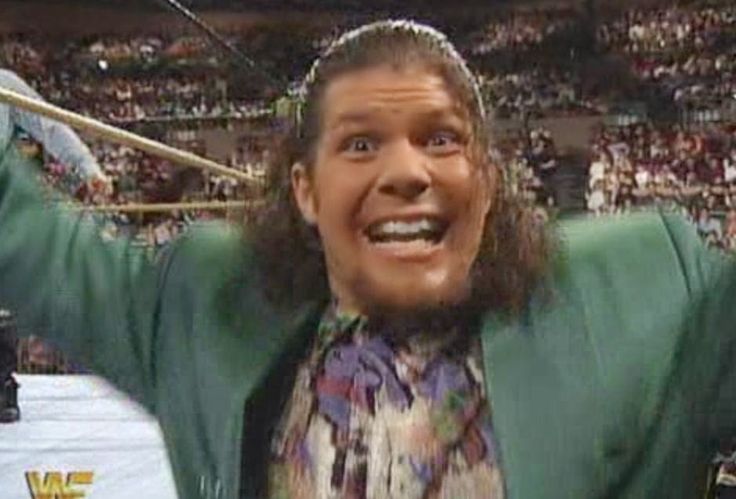 The Reigns mail just keeps on flowing.  Let’s see how long I can avoid it.

So the purpose of 50/50 booking is to prevent one guy from becoming bigger than the brand? To give the perception that everyone on the roster is on the same level? Then why not have all the matches leading up to PPVs be squash matches against enhancement talent?

Wouldn’t that achieve the same goal…that being everyone on the roster looking like they’re on the same level? The only difference is they would all look equally amazing rather than look like dorks that trade wins.

I’m sure Vince would actually be 100% on board with that plan again, but the problem is that the USA Network dictates a lot of the stuff on RAW, such as “More McMahons!” and “Big name matches on the TV shows we’re paying hundreds of millions of dollars for!”  Really, now that the toothpaste is out of that tube, there’s no going back in.

Do you ever think that Scott Levy missed his calling by not going into commentating? I was watching him help co-host the WM X pre show as Johnny Polo and he was although he was obviously unpolished he still managed to be funny and entertaining. I also seem to remember calling some  Coliseum Video matches and being decent at it. I know people love the raven character, but I was never much of an ECW guy so I don’t have much nostalgia for it. What do you think?

Raven said that Vince offered him a permanent job as color commentator and producer of RAW near the end of his Johnny Polo run, but Levy really wanted to be a wrestler and the WWF wouldn’t allow him to do that any longer.  Hence the Raven character in ECW.  But yeah, he would have been awesome as a behind-the-scenes guy and probably would have had much more job security going into the Monday Night Wars anyway.  But such is life.

I, like most right-thinking human-beings, am absolutely flabbergasted by the recent inclusion of Jackie into the WWF HoF. I only have one theory about this induction, which is just that it’s a shot at Chyna for all her craziness. Otherwise, are they just trying to mock their own HoF or are they just realizing that the pool of politically acceptable wrestlers to induction is dwindling by the year?

My theory is that she has big boobies and they needed another chick to fill their quota this year, and since she was Miss Texas and they’re in Texas, that checked enough boxes to let her in on the Koko B. Ware ticket.  Or, as I guess we can call it now, the Jackie Moore Rule.

Wondering about the NWO in WWE. In a perfect world, where WWE puts it’s ego in check and lets NWO run wild to actually recreate the magic, do you think even then, it would’ve had legs?

I’m just thinking about it since Hogan was gonna turn monster face no matter what. Once he left, wouldn’t the Outsiders have be dead in the water?

The whole idea was sad and dead in the water before it even got to TV.  WCW had already tried the “Getting the band back together” deal in 2000 and that didn’t help ratings one bit, and two years isn’t long enough for nostalgia to form.  Scott Hall was a wreck and Nash didn’t give a crap, so no, the whole thing had no legs except as a brief nostalgia run that should have ended at Wrestlemania when Hogan lost.  I mean, Hall and Nash weren’t even outsiders, they were well known WWF guys!  That’s completely against the point of the angle!

I’m enjoying the Observer Flashback series on the blog. I’ve been listening to some of Ric Flair’s podcasts, and he and a few of his guests have made mention to the fact that the travel schedule in the WWF was brutal. Do you have any insight as to what made it so difficult for the wrestlers in WWF, and how did it compare to traveling either for the NWA as a whole or traveling for just one territory?

The main problem for them was that the WWF ran as many as three shows a night all over the country, so unless the guy doing the booking was a Sheldon Cooper-level math genius you were frequently going to run into some brutal scheduling of people. Especially if you’re on the C-show or god forbid the D-show roster, where you’d have to go from small town to small town by car rather than flying everywhere like the Hogans and Warriors got to.  The NWA really only ran most of its shows on the East Coast once Crockett took over, with the exception of occasional PPVs, so that was much easier to deal with.

Whew, we made it through without any Reigns mail.  Maybe next time.