Late in the evening on July 6, 2014, word began to spread that Santino Marella announced his impending retirement at a house show in his hometown of Mississauga, Ontario, Canada. Marella has been battling neck injuries on and off for years and finally decided it was time to walk away before further damage was done. Marella made his WWE TV debut in April 2007, portraying a fan in the crowd chosen by Mr. McMahon to challenge Umaga for the Intercontinental Title. Thanks to an assist from Bobby Lashley, Marella upset the Samoan Bulldozer and shockingly won gold on his first night in the company. Since then Santino has transitioned to a lower card comedy role, but one that always entertained fans and provided some great underdog moments as well. To remember his career, here are Scott & Justin’s review of his WWE PPV debut and one of his biggest PPV moments. 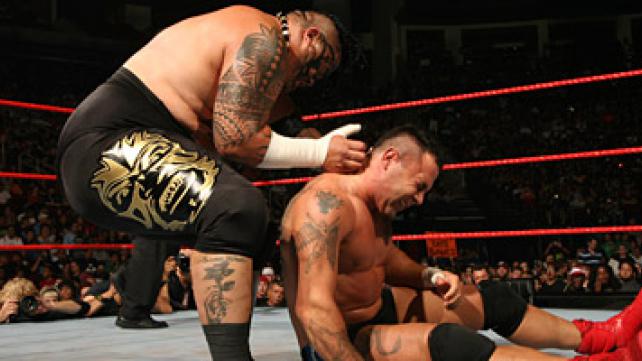 Fun Fact: Born in Canada, Anthony Carelli traveled to the US in 2006 and signed on with Ohio Valley territory. Initially competing under the name Johnny Geo Baco, Carelli was involved in a major incident with OVW booker Jim Cornette. During a segment where Carelli was supposed to show fear from the Boogeyman, he instead laughed at the absurdity of the gimmick. An angry Cornette snapped and smacked Carelli in the face. Cornette would be fired as a result of the incident and has not returned to WWE to this day. Upon Paul Heyman taking control of the territory, Carelli was rechristened as Boris Alexiev, a Russian shoot wrestler. He would dominate opponents and pick up quick wins using stiff strikes and submissions. On August 6, he officially signed a WWE developmental deal. He would hold the TV title on two occasions before being called up to the main roster in March 2007 and given the name Santino Marella, a tribute to the late Gorilla Monsoon.

Fun Fact II: On the 4/16 Raw from Milan, Italy, Mr. McMahon decided to choose a hand-picked opponent to challenge Umaga for the IC Title. McMahon scanned the crowd for a challenger and settled upon an eager man near the front row. He hopped in the ring and revealed his name to be Santino Marella. A few minutes into the match, Bobby Lashley interfered and helped Marella upset Umaga and win the gold. Two weeks later, it was announced that Marella had signed a contract and would remain IC Champion. After a feud with Chris Masters, Umaga was back on Marella’s radar and was given a rematch for the IC strap here.

Scott: I saw this match on the card and I thought immediately that this Italian upstart’s magic carpet ride was going to come to a crashing end. Umaga has been nothing other than Mr. McMahon’s muscle the past few months. He really works the champ over with the nerve pinch using that heavily taped hand. It’s funny how many tattoos that Santino has since back then he wasn’t wearing a singlet. Surprisingly Umaga gets disqualified for punishing Santino in the corner too long. I didn’t get that at all as I thought Umaga was ready to take back the title and go on another rampage. Umaga kept it up and beat Santino down after the bell. I thought this was a gimme title change. That didn’t happen, and with that we have an underwhelming match and grade. Grade: *

Justin: In our fourth title tilt, the unlikely IC Champ Santino Marella makes his PPV debut in a rematch with the Samoan Bulldozer. I liked the way they introduced Santino as it got him over with the fans off the bat and over the weeks that followed, he proved he wasn’t just a fluky champion. Early on, Santino tried to cradle Umaga for a win, just as he did in Milan. He did his best to slug away at Umaga, but he couldn’t rock the big man as Umaga just splattered him with a Samoan Drop. The fans were pretty into the Bulldozer, thanks to his stiff aggressive offense. After dominating the match, Umaga just started battering Santino’s head as he was prone in the corner and the referee finally had enough and disqualified Umaga. Santino retained his gold, but Umaga destroyed him after the bell with a running bulldozer in the corner, a huge top rope splash and a Samoan Spike. This was essentially a squash and didn’t do much for the IC Title but it made Umaga look hella awesome and had the crowd chanting his name in the end. Grade: *1/2 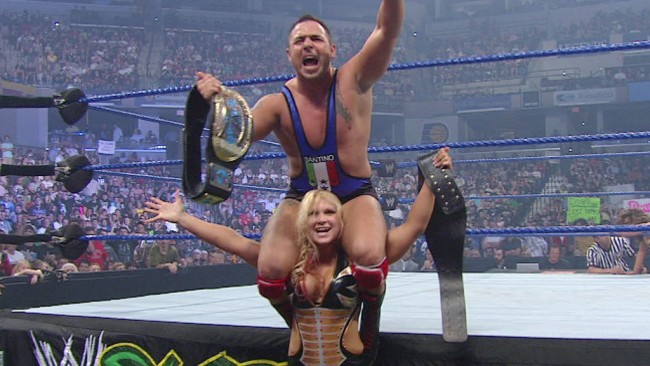 Fun Fact: On 7/21, Santino Marella issued an open challenge but clarified he did not want to wrestle a woman. The challenge was answered by a returning D-Lo Brown, but after the match, Beth Phoenix came out and punched Marella in response to his sexist remarks. After the two struggled for a moment, they ended up awkwardly kissing to end the segment. The next week, they claimed their relationship was strictly professional, but after defeating Brown and Kelly Kelly, Beth eventually gave in and planted a big kiss on Marella. On 8/4, Marella and Phoenix went to Mike Adamle’s office and demanded that they receive title matches at SummerSlam. Instead, Adamle gave them a tag team match against Intercontinental Champion Kofi Kingston and Women’s Champion Mickie James with both titles on the line. Kingston and James had recently begun teaming in inter-gender matches as well as assisting each other when needed. Later in the night, Phoenix assaulted James and laid her out. Finally, a week later, Phoenix was sending a message by beating down Kelly until James & Kingston made the save. Marella then challenged James to a match, noting that they were in her hometown. Mickie accepted, but lost the match thanks to Beth getting involved.

Scott: This would begin the best stretch of Santino Marella’s career. His heel turn and connection with the Glamazon put him back in the spotlight. After the upset win in 2007 for the IC Title over Umaga and subsequent loss of that title he floated around for a bit. The only reason that I thought the heels would win here was that Beth Phoenix was due for a Women’s Title reign, and it would be a great plot point for Santino to win the IC Title without actually pinning Kofi. I’m not discounting Santino as a worker by any stretch, but his character suits this type of storyline where he coasts on his girlfriend’s coattails. The match is solid enough, particularly the women’s combo as Mickie and Beth are obviously great workers. I forgot about the movie motif for this year’s Summerslam, complete with movie theater front on the stage. Funny since they wouldn’t start going to California until next year. Beth decks Mickie from behind and pins Mickie after hitting her finisher for the win for her team, and the unconscious Santino is bequeathed the Intercontinental Title. Grade: **

Justin: Glamarella is in the house and Beth & Santino were quickly becoming one of the most entertaining acts on Raw. I liked the fresh match concept here too, foisted on the champs by Mike Adamle. Mickie James has had a strong year, but the writing seemed to be on the wall that Beth would eventually take her gold back. Santino was getting more and more ridiculous as the weeks rolled on, developing the unibrow and mullet and some very interesting speech patterns and mannerisms as well. Jerry Lawler discusses Beth’s focus on regaining her gold, which really did seem like the grander goal of this team. She and Mickie kick things off with Beth gaining control and then tagging in Santino. Mickie actually squirmed away before hitting a couple of moves on Marella and tagging back out. Kofi was a ball of energy and a breath of fresh air thanks to his look and style. I liked that they put the title on him out of the gate, as I felt he had the ability to really grow into the role as opposed to others that drown in it. After Santino got a brief flurry in, the men bailed and the ladies were back at it, continuing what has been one of 2008′s lengthiest on and off feuds. As Mickie was rolling, Santino got involved but wiped out out by the women’s champion. However, that was all Beth needed as she decked Mickie and planted her with the Glam Slam to win both titles for her team. The post match celebration was pretty good as Santino celebrated like a mad man and then rode out of the arena atop Beth’s shoulders. The match was fine but the outcome and antics woven throughout were pretty good. Grade: *1/2