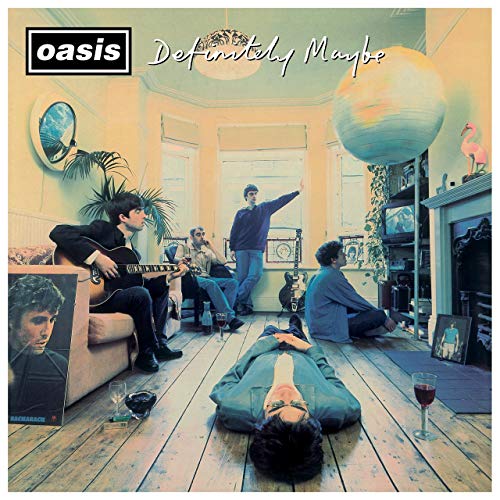 25 years ago, a band from Manchester took their first steps to taking over the world of music, and the lyrics above were the first words you hear on their first single and it tells you an important message immediately – Oasis were going to do it their way.

At that time, the UK Singles Chart was dominated my cheesy pop and RnB songs, and the previous Christmas No. 1, one of the biggest accomplishments in British music, was won by Mr. Blobby, a TV character.

Taking inspiration from bands like The Stone Roses, The Jam and most notably The Beatles, Noel Gallagher had a catalogue of songs written before he was even part of the band. The remaining members were touring to little success as The Rain (named after the Beatles song) whilst Noel was touring as a roadie for fellow Manchester band the Inspiral Carpets. When not on roadie duty, Noel would pen what would become masterpiece after masterpiece.

It was only when Noel came back home after a tour that younger brother Liam asked him to be in his band which Noel accepted, albeit only if he would be the main songwriter. Noel would later go on to say he had so many songs written that he had so many songs written that the best 12 went on this album, the next best 12 went on the next album (What’s the Story?) Morning Glory (which is arguably the better album), and so on.

In 1993, Oasis travelled to Glasgow in a minivan and were followed by an army of friends, family and fans looking to see them perform at the locally legendary bar/music venue King Tut’s Wah Wah Hut. However, thanks to some miscommunication, Oasis were not on the set list when they arrived. After speaking to the manager and promoter Oasis were accommodated to a slot to open up the proceedings that night. It was during this set the band were spotted by Alan McGee, owner of Creation Records, and the rest as they say is history. With one minor threat to a promoter, UK music was about to change, and Oasis were about to take on the world.

The first single off of the album would be Supersonic, released April 11, 1994. This song was not actually part of Noel’s back catalogue but instead it was written during an album recording session. The band were at the studio to record Bring It On Down and were warming up with a jam session. When the outcome of the intended song didn’t come out as well as hoped, it was decided to work on something new based on the warm-up earlier in the day in the hope that it wouldn’t be a wasted journey to the studio.

And so, while the rest of the band were in the middle of their Chinese takeaway, Noel was hard at work trying to turn the jam session into a song worthy of the album and thus Supersonic was born and recorded in the small hours of the morning. Noel would later state that he always finds it unbelievable to hear fans signing back a song that he wrote at 3AM.

Next up was Shakermaker, release on 13th June. There are a million and one great “driving” songs but this must be one of the few great “walking” songs. It’s almost impossible, for me anyway, to not imagine Liam’s trademark swagger when this song comes on, and mimic it straight away.

The inspiration for the song comes from the world around Noel from growing up to the time of writing. Examples of these would be the title, the Shaker Maker was a popular toy when Noel was growing up in the 70s, Mr. Clean is the title to a song by one of Noel’s favourite bands The Jam, and Mr. Benn was a British cartoon character. The melody for the song was also based on I’d Like to Teach the World to Sing which was in a Coca-Cola advert when Noel was growing up. (in some live performances, Noel would even change one of the lines to “I’d like to buy you all a Coke” in a nod to the songs origin)

The ultimate example of using his surrounds happened in the taxi on the way to the studio for another recording session, however. The feeling was the song wasn’t fully complete and needed an extra verse and, to the shock of absolutely no one, Liam and Noel were at odds with each, with Liam pestering Noel to get the song finished.

While stopped at traffic lights, Noel looked out the window and saw Sifters, a record shop in which he used to go to as a teenager and in a light-bulb moment came up with the line “Mr. Sifter sold me songs when I was just sixteen”. All that was left to do was finish the verse and the song was complete.

The next release on August 8th is my one of my favourites song on the album, Live Forever. Originally written in 1991, it was intended to be the counter argument for grunge music which was still huge at the time. Noel has said that he remembered that there was a Nirvana song called I Hate Myself and I Want to Die, and his first reaction was “well, I’m not fucking having that… kids don’t need to hear that nonsense”. This song is more uplifting and optimistic than the last two singles with lyrics like “maybe I will never be; all the things I want to be; now is not the time to cry; now’s the time to find out why” and obviously “you and I are gonna live forever”.

Live Forever is a perennial crowd favourite and always gets the same reaction whenever its played – as soon as you hear the first bar of the song it turns into Oasis karaoke. If it was an internet meme it would be:

The live performances were more often than not accompanied by a slideshow of deceased musicians that the band admired, most notably always finishing with John Lennon to universal approval from the crowd every time.

The US video for this song is the better of the two produced and somewhat mimics this theme where the band are in an office surrounded by pictures of people like Sid Vicious (the guitarist, not the master and ruler of the world), Kurt Cobain, John Lennon and Jimi Hendrix amongst others. Surrounded by legends and their heroes, Oasis were on a fast track to becoming revered in the same manner as these artists with this album.

The fourth single off of the album was the rough, punchy and downright loud Cigarettes and Alcohol. This is the song that put the Oasis attitude to the forefront and showed the 451,000 people who bought Do The Bartman 3 years before to put that song to NUMBER 1 in the UK charts for THREE WEEKS that they are not in Kansas anymore.

Cigarettes and Alcohol is how many people viewed life in 1990s Britain set to a riff which was “borrowed” from T-Rex’s Get It On and the band’s boss Alan McGee would claim the song was “one of the greatest social statements of the past 25 years”. Lines like “Is it worth the aggravation to find yourself a job when there’s nothing worth working for?” highlight the apathy and general sentiment of the UK in the mid-1990s, a feeling that is just as relevant in 2019 than it did 25 years ago.

Due to this apathy many peoples escapes were cigarettes, alcohol and drugs (“you might as well do the white line”) highlighted by the first line of the song “Is it my imagination, or have I finally found something worth living for?” – this is the original Trainspotting of songs. And herein lies the one of the secrets to Definitely Maybe’s success – they wrote and performed songs about what people were doing and thinking at the time.

The final single off of the album is the opening track, Rock ‘n’ Roll Star. This immediately became a fan favourite and remains as such to this day. There’s really not much to say about this song that the song itself doesn’t tell you. It’s loud, its brash and it gets across the dream of millions of people worldwide who want to be a rock star.

Noel would later say that everything he wanted say in his songs he put across in this song, Live Forever and Cigarettes & Alcohol and then everything else after that he was just repeating himself in a different way.

This is an excellent, shouty song which is always a favourite and volume raiser when it comes on in my morning karaoke session, eh, I mean morning commute.

One of the things I love the most about Oasis is that the b-sides and album songs are just as good as the singles. There are too many to go through but I want to give a special mention to Slide Away. This is such an epic song that it’s almost unbelievable that it wasn’t a proper single, but what most people don’t know is that it was actually meant to be one. Slide Away was tentatively scheduled to be the sixth single off of the debut album, until Noel that you couldn’t have that many singles coming off of your debut album.

This was a song written by Noel about his girlfriend at the time with whom he was having a troubled relationship. He noted that he sat down with a guitar sent to him by Johnny Marr of The Smiths and it “wrote itself”. This song is a fan favourite but was rarely played live by Oasis, however it has since become a staple of Liam’s solo shows.

The importance of Definitely Maybe cannot be understated. It helped usher in the Britpop era of the mid to late 90s and it put Oasis on the music map. Oasis would go on to inspire countless other bands such as Arctic Monkeys, The Killers, and even Coldplay.

The album is just as popular today as it was when it originally hit shelves, and over the years it has been re-released time and again. Definitely Maybe has been in the Top 50 in the charts in three different decades, reaching No. 1 in 1994 with the original release and again making the charts with the 2004 and 2014 anniversary releases. I wouldn’t put it past it charting again in the 2020’s for the 30 year anniversary in all honesty.

In July of last year I, and 50,000 other people, had the privilege of seeing Liam Gallagher live, and of the 17 songs in his set that night, 8 of them were either from this album or a b-side to one of the singles, and he had every single one of us in the palm of his hand during those songs.

It’s because of this album that just over a year and another epic album later that 3.5m people applied for 1 of 250,000 tickets to see the band at Knebworth, and that both brothers can still play to festival crowds in 2019, and that you will still see people dressed in parkas, bucket hats and round tinted Lennon-esque sunglasses in most cities across the UK.

It might be cheesy to say, but for me and many many others, this album will indeed Live Forever.