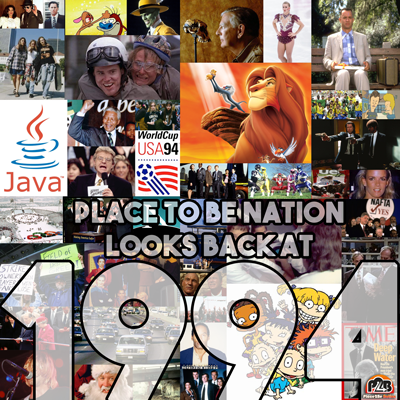 As I embark to see my favorite band perform with mid 90’s alternate powerhouse bands Our Lady Peace and Live, I wanted to take a moment to reflect on the band that has unequivocally changed my life for the better for the past 25 years, and celebrate the monumental 25th anniversary of their first album, Sixteen Stone.

Sixteen Stone, released December 6th, 1994, was somewhat of a cheat album, considering most of the singles were not formally released for public consumption until the following year. However, from the moment this album’s music graced my ears in 1995, I was hooked, and Bush became a steadfast friend, ushering me through my life’s journey.
Bush’s Sixteen Stone, much like Oasis’s Definitely Maybe, which was wonderfully covered by Calum McDougall, is a debut album by a band from the UK. However, their sound and aesthetic put a spin on American grunge rock, and gained a quick following in the US, while remaining virtually unknown in their homeland.
Within a year of Sixteen Stone’s release, Bush was headlining American arenas and bringing much lesser known bands to the forefront. These bands included: The Toadies, The Goo Goo Dolls and a very little known female fronted ska band out of California at the time…No Doubt.

The lead single and opening track to the album is a song called “Everything Zen”. Bush first got their big break in America thanks to the influential KROQ radio station in California playing that single for the first time. That’s right, kids! Back in the day, being played on the radio was actually a big deal!. “Everything Zen” is a strong grunge sounding song that hits you in the mouth immediately. It hits people in that ‘Seattle sound’ sweet spot while sounding much more polished and cohesive than what some of those Seattle bands put together. Paying tribute to artists such as David Bowie and Tom Waits, you get a feel instantly of what kind of lyrics you’re going to get from one Gavin Rossdale.

“Little Things” is the next single off this album and, like Everything Zen, is another punch you in the mouth hard and fast grunge sounding song. If you are to ever see Bush play live…this is the song that Gavin Rossdale seems to have the most fun playing live as he ends up all over the venue.
The song itself, the lyrics, is a reminder to not to be let down by all the details. To not let the “little things kill”, so to speak. Gavin said in an interview about this song: “That’s just a song about paranoia for the future and paranoia of life. I think it has something to do with trying to be strong in the face of adversity.” Perfectly sums it up.

The next single off the album and the song that made me immediately fall in love with this band is “Comedown”. One of the most popular tracks from the band, I credit this song as REALLY breaking them out and giving them their main notoriety. It is easily one of the most popular alternative rock songs of the 90’s and it is such a catchy tune. Featured in the Mark Wahlberg movie “Fear”, was ripped off for a WCW theme in the dying days for Chris Kanyon and was even covered by our very own Steve and Kelly for an episode of Songs with Friends!
The lyrics for the song I’ve always viewed as being on such an emotional high and not wanting to come down from it, so to speak. In an interview with Gavin about this song, he states that “I liked the idea of euphoria. But having that euphoria has a comedown. It’s inside your brain and just says, ‘I’m having the greatest time, and I don’t want to stop.’ But most of the time, people lose that zone and it changes and you’re like, ‘No, I didn’t want this.’ And that’s such a common feeling. I watched it being sung every night – it’s one of the songs where I can step back and let the people sing. It’s the best feeling in the world as a songwriter.” It’s the very first song he wrote when Bush formed, so it’s obviously very important to him. It’s also the song that they close out every concert with.

Glycerine…oooooooh, my Glycerine. Arguably their most successful and popular song to this day. This is such a beautiful, beautiful song. This would be considered the power ballad of the album and is only Gavin with a guitar without the rest of the band playing with him. This song was, I believe, #2 for the entire year of 1996 on MTV, won the MTV VMA for Viewers Choice, it was even parodied in the 90’s episode of the Simpsons with “Margarine”.

This song is kind of iconic for my generation. Its also a wonderful live experience. Many of the times the rest of the band comes out and they have a “rock” closing for the song which is interesting and a lot of fun. Many may remember the performance of this song in the pouring rain as part of MTV’s Sprong Break Rocks in 1996.

The lyrics to this song are very beautifully written and very melancholy. My favorite lyric is “I’m never alone, I’m alone all the time.” This song was written about Gavin’s then girlfriend. “Something about it was bigger than anything we were doing” Rossdale stated in an interview. If he only knew how right he was.

Machinehead is the fifth and final single off of this album. No matter what age you are…you’ve probably heard this song at one point in your life. It’s practically played at every single sporting event known to man, is featured in many video games and was also featured in the movie Fear, for which it won ‘Best Song From a Movie’ at the MTV Movie Awards. It also has a cheap ripoff version used for WWE for dvd menus.

As far as the rest of the album goes…I don’t think there is a stoppable track of the bunch. They all hit pretty heavily in the Alternative Rock feels and if you love that 90’s post grunge sound…Sixteen Stone will satisfy that need. From “Body” to “Testosterone” to the beautifully written “Alien”, Sixteen Stone May possibly be the perfect album.

Sixteen Stone went on to sell 6 million copies in the US and 10 million copies worldwide. Not bad for a band that was once told by the record label, “not only are their no singles on here, there are no album tracks either.” While some people say it can be attributed to Gavin’s good looks and charisma, I and many others think the music is the key. Like the cover of Spin Magazine said, “Don’t hate them because he’s beautiful.” After all, there is a reason they are still making music and touring 25 years later.
Now granted, it may not be my personal favorite from the band(in all honesty, that could be from me overplaying it the past 25 years…), there is a reason that it is their most popular. So if you like 90’s rock and you HAVENT listened to Sixteen Stone…what are you waiting for?