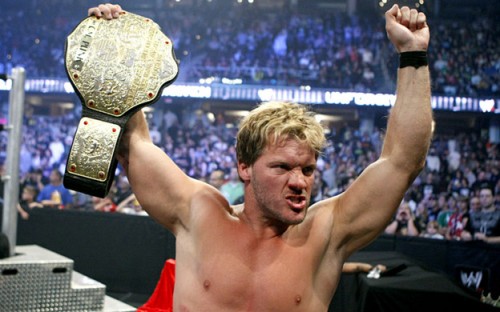 Often the bridesmaid but rarely the bride, Chris Jericho had already carved out a legacy as one of the best overall wrestlers of the modern era when 2008 rolled around, but he was generally viewed in a tier alongside great in-ring performers like Chris Benoit and Eddie Guerrero rather than permanent main eventers like Shawn Michaels, despite his superior abilities with a microphone in hand. Fresh off his comeback after a two-year layoff, Jericho entered ’08 as the babyface Y2J fans had loved in the early 2000s.

But something just wasn’t right. Maybe the promos felt a little dated, maybe the jokes didn’t quite hit 100 percent of the time, and maybe his momentum never quite picked up due to the state of the company. In any case, it was evident that Jericho had lost some steam in the few months since his return. Despite that, he still managed to have terrific matches in the first quarter of the year, particularly against the likes of Jeff Hardy and CM Punk. He also engaged in one of the better Elimination Chamber outings WWE has produced.

Let’s face it, though. The reason Jericho is on this list is because in the spring, he began one of the great character transformations in the history of the business. Involving himself in a feud between Shawn Michaels and Batista, Jericho proclaimed himself a beacon of truth who felt it his duty to shine a light on the fraud that was the Heartbreak Kid. After Michaels cheated to beat Batista, Jericho called him out on it and sparked arguably the best WWE feud in the last decade. As the fans sided with Shawn, Jericho proclaimed the death of Y2J. In place of flashy jackets and punchy one-liners came sharp suits and calm, almost-monotone interviews packed with words that required a thesaurus to fully grasp. Jericho, over the summer, transformed into one of the great heel characters of our time. He was so influential, in fact, that countless heels have copied him in the ensuing years. The Miz built an entire character off Jericho’s blueprint.

But it wasn’t just the epic promos and character transformation that got Jericho in this position. He also turned out some of the best in-ring work of his storied career, having classic bouts with Shawn Michaels that culminated in a timeless ladder match at No Mercy. If asked to name a single performer at any point in the industry’s history that best represents the total package, it’s tough to find anyone better than 2008 Chris Jericho. 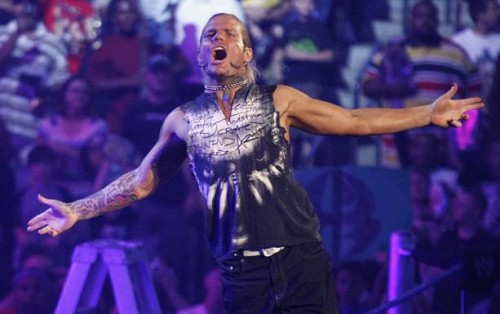 Jeff Hardy spent over a decade climbing his way to the top of the wrestling mountain, with fans cheering him vociferously every step of the way. Ironically, 2009, the year that would finally see the “Charismatic Enigma” solidify his place as an A-level talent in WWE, began with him losing the WWE title he’d won only a month before to Edge at the Royal Rumble thanks to the betrayal of his brother Matt.

While the WWE and World titles became the object of hot potato games between Edge, Triple H, John Cena, and Randy Orton over the next few months, the Hardys blood feud raged with mixed results; their Extreme Rules encounter at WrestleMania XXV fizzled a bit, but the siblings rebounded with an intense I Quit match at Backlash. The crowd’s love for Jeff never wavered, and after dispatching his kin, he’d dive right back into the World Title mix.

Hardy toppled Edge once more in a standout ladder match at Extreme Rules, only to have CM Punk cash in his Money in the Bank briefcase and pick up a quick win as well as the title. In one another, Hardy and Punk found their perfect adversaries: Punk’s straight edge lifestyle ran counter to Hardy’s “free thinking,” while the “Second City Saint” detested Jeff’s degenerate failings with substance abuse. Prior to this feud, Punk’s heat had cooled considerably following his initial run in WWE, but going up against somebody with Hardy’s unmatched fan support allowed him to catch fire as a heel and pave the way for his epic upcoming run.

Punk and Hardy warred throughout the summer, trading the World Title back and forth before ending their feud with a TLC match at SummerSlam that Jeff lost. The duo helped elevate SmackDown after years as WWE’s definitive B-show not only against one another, but by virtue of tremendous outings involving Chris Jericho, Rey Mysterio, an emerging John Morrison and others. On August 28, Punk dispatched Jeff in a steel cage match that would end Hardy’s WWE tenure, as he opted to leave the company in order to heal nagging injuries; he would resurface in TNA the next year following a tumultuous fall that saw a drug-related arrest.

2009 on the whole lacked consistency in wrestling. While Randy Orton dominated the WWE title for several months, he rarely looked strong in victory. Edge had his momentum cut off by a near-career-ending injury. Chris Jericho made the best of mid card and tag team programs, not being afforded the opportunity to shine on top. John Cena, Triple H, etc. got lost in the shuffle. TNA tried to rebuild following the Main Event Mafia run, while ROH dealt with identity issues. Jeff Hardy may not have had an all-time year, but he stayed hot, and if nothing else played a crucial and oft-forgotten role developing wrestling’s next breakout star in CM Punk. 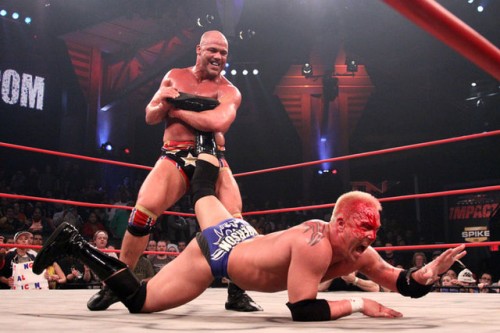 If there was a prevailing theme throughout the year 2010 in professional wrestling, it was the old adage that the more things change, the more they stay the same. While Shawn Michaels wrestled his last match at WrestleMania XXVI and The Undertaker and Triple H went on highly limited schedules going forward, the promise of new stars like the Nexus and Alberto Del Rio to take their place for the rest of year merely gave us a whole bunch of John Cena and Randy Orton again. The same adage was apropos at Total Nonstop Action Wrestling on Spike TV, where Dixie Carter started out the year 2010 looking to throw her best punch at the wrestling behemoth that is WWE. Wholesale changes were on the way as Hulk Hogan, Eric Bischoff, and a host of WWF/E washouts migrated to TNA promising something great and different for those jilted, bored WWE viewers. While such a promise is easier said than done and the Monday Night battle between WWE and TNA in early 2010 was about as one-sided as Emma Stone in a lip synch battle, not all was necessarily lost in the IMPACT Zone in Orlando.

While roles in the ring and behind the scenes were being handed over like turkey at Thanksgiving, the one thankful constant there was the superb in-ring performances of Kurt Angle, who by the point had become a four-year veteran in TNA after leaving WWE in 2006. Angle had already done it all in TNA by this point as well (at one point, he held literally every title in the company in 2007), but after a long heel run, he was more than ready to settle in the role that he had been promoted as for years in WWE: A tireless workhorse who could have great matches with anyone thrown at him. TNA provided some stinkers for Angle to compete with that year (Scott Hall, anyone?), but it started off with a bang when he continued his long feud with TNA Champion AJ Styles. Their match on the first IMPACT to go head-to-head with Raw (on the same night that Bret Hart returned to WWE after a 13-year absence) was one of the most memorable in the company’s history, a true showcase of what made TNA so great when they got things right.

While Hogan, Bischoff, Vince Russo, and Dixie Carter were doing a whole lot of things wrong in 2010 as the new head brass at TNA, Angle refused to, as Samoa Joe once joked, get “tripped up on bad booking.” After almost turning Desmond Wolfe and Matt Morgan into overnight stars in late 2009, his next new rival was one of his best ever with the former Mr. Kennedy, Ken Anderson. Their feud over Angle’s gold medals and personal pride against a self-proclaimed asshole culminated in my favorite non-WWE match in 2010, a Six Sides of Steel match between the two at Lockdown. His 30+ minute match with Jeff Hardy at No Surrender is one of the most forgotten great matches in the company’s history. And although he “retired” storyline-wise after Bound for Glory, it merely rekindled another memorable feud with Jeff Jarrett (and eventually his real-life ex Karen) before continuing his hot streak in 2011. There were plenty of things we would rather forget during TNA’s bold but failed swing at WWE in 2010, but I will never forget the multitude of great performances put out by Kurt Angle, a Hall of Fame wrestler still in his prime. 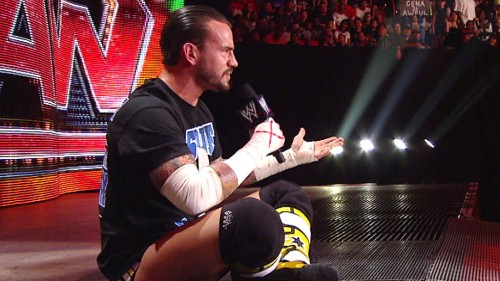 Before that fateful night on Monday Night Raw, the term meant absolutely nothing beyond its dictionary definition. It certainly had no meaning within the context of pro wrestling. But with one fateful monologue, CM Punk turned it into the default term for any shocking, attention-grabbing interview or promo in the industry. That one promo, which kicked off WWE’s version of the “Summer of Punk,” changed the course of Punk’s career and, though all too briefly, the course of World Wrestling Entertainment. By now, anyone reading this has probably seen the promo dozens of times. If you haven’t, look it up on YouTube right now. Go on, I’ll wait.

All righty, then. Punk started the year in a go-nowhere angle with the New Nexus, powering through a lukewarm feud with Randy Orton (though they had some good matches). Once the pipe bomb was delivered, though, Punk became WWE’s biggest mainstream star since the Attitude Era, receiving attention from TMZ, Sports Illustrated, ESPN and Grantland, just to name a few outlets. It all peaked with a classic bout in Punk’s hometown against WWE’s homegrown Superman, John Cena. Shockingly winning in relatively clean fashion, Punk was cemented as a top-of-the-food-chain superstar, taking the belt home with him and holding it hostage for weeks. He returned rather quickly, though, having another great match with Cena and kicking off an unfortunate feud with Triple H.

Though WWE bungled the story through the fall, for one gleaming moment, Punk provided wrestling a much-needed and long-overdue shot of mainstream buzz.