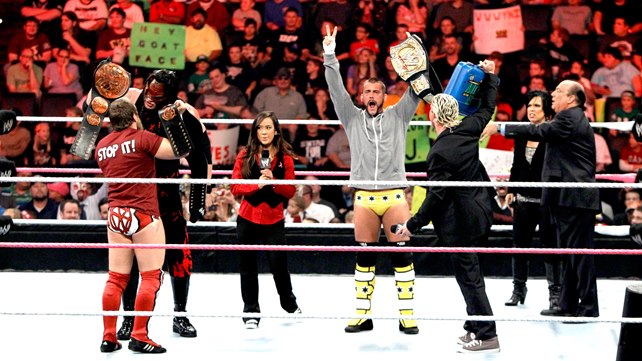 Arguably the best thing I’ve heard any sane person say about WWE’s Monday Night Raw in the three-hour era is that a really good 90-minute show can usually be found within it. For those of us not tasked with recapping these monstrosities, that means Raw is still highly enjoyable most weeks with the simple push of a trusty fast-forward button.

But if the best thing you can say about a show is that it’s really good when you skip half of it, something is amiss. For whatever it’s worth, the WWE reportedly was no happier about this than we are; USA Network wanted the third hour, not the WWE, and why wouldn’t they? Nothing they put in that 8:00 PM EST hour is going to come within shouting distance of Raw’s ratings. Even if it wasn’t their choice for the third hour, though, the WWE started rolling this ball down the hill a long, long time before we got to that point in July 2012.

As he so often did, CM Punk said it better than I ever could; in the buildup to his Royal Rumble match with The Rock last year, Punk said that if he won the title in Bruno Sammartino’s day, he’d have “been champ for 30 years.”

It was an arrogant excerpt from a fairly boilerplate wrestling heel promo, sure.

But it’s also not much of an exaggeration.

Let’s actually skip forward from Bruno’s day to Hulk Hogan’s for a point of comparison. It would take a smarter person than me to crunch the numbers and do the kayfabermetrics (and man, do I wish I’d invented that word) on this, but the amount of time in which Punk’s face appeared on WWE programming in his 434-day WWE title reign has to be many, many times more total hours than how much Hogan’s appeared on WWF programming in his four-year reign from 1984-88.

Of course, the WWF’s business model 30 years ago was not nearly the same as it has been for the last 15 years. While Vince McMahon uprooted the once-regional WWWF and took aim at the territories, taking over many of their syndicated TV slots, the WWF still operated more like an old wrestling territory than the multimedia entertainment company they’d become (or at least constantly aspire to be to mixed-at-best results), albeit on a national — and burgeoning international — level. Shows like Prime Time and All-Star Wrestling were largely commercials for the house show circuit. Top-level stars would appear infrequently, and usually to squash jobbers when they did show up. But rest assured, Hulk Hogan is coming to your town, so buy a ticket. (Of course, Saturday Night’s Main Event saw many top stars in high-level matches. But those were intermittent specials, as just 31 of them aired in its original run from 1985-92.)

As with so many other things in wrestling’s modern era, the Monday Night Wars changed this template for good. WWF’s now-flagship show, Monday Night Raw, started in 1993 and continued as a show largely filled with squash matches and clogged with jobbers through much of 1996, give or take. WCW, of course, went into direct competition with the WWF on Monday nights almost exactly 19 years ago in September 1995 with Monday Nitro. When Lex Luger showed up on the premiere episode of the program, things began to change. 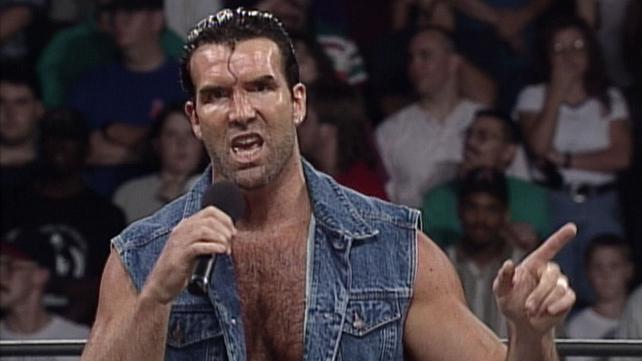 The “turning point” is a bit of a lazy trope used to explain things that aren’t actually that easily explained, because in reality it’s usually a lot of things combined that enact wide-scale change. The WWF v. WCW battle is no different, but the Luger defection, happening on a live series premiere against no competition, as Raw’s usual stale, taped show was preempted, certainly got the ball rolling. That momentum created by Ted Turner’s deep pockets — combined with the WWF’s stasis — eventually manifested itself in the defections of Scott Hall and Kevin Nash and the creation of the nWo, which even compared to Luger’s shocking defection showed on a much wider scale how out of touch and outdated the WWF’s product had become.

Nitro, upon its debut and subsequent Hall/Nash arrival months later, became a cutting-edge, weekly supershow to the extent that no weekly national wrestling show had ever been. Its top stars almost always appeared on every show, if not to wrestle than at least to further top storylines. The roster was infused with groundbreaking high-flyers and in-ring jaw-droppers like Rey Mysterio, Eddy Guerrero, Chris Jericho, Chris Benoit and others to provide the workrate the main eventers didn’t. (All of whom, ironically, eventually found main event success in the supposedly giant-obsessed WWE that they could never sniff in WCW. Which, of course, is one of the many reasons WCW was finished in just a few short years, but we digress.)

Enough of the history lesson, though; either you already know all of this or if not, a much more detailed history of the “Monday Night Wars” can be found in any number of places. What’s important in terms of how it pertains to today’s product is the sheer amount of content that both companies eventually had to produce.

The success of Nitro beget an additional weekly show, TBS’s two-hour Thunder on Thursday nights. The subsequent success of Raw, of course, beget their Thursday night answer — and on network TV, no less — in SmackDown. And along the way, of course, each company expanded their pay-per-view business to a monthly spectacle.

Over a decade later with the competition long gone, Raw’s 2012 expansion to three hours seems to have been something of a tipping point for a more-than-decade-old problem. 20 hours a month of weekly television that the top stars all regularly appear on, plus a monthly PPV has proven to be too much to be sustainable for storylines and characters alike.

An oft-repeated refrain is that the WWE struggles to create new talent. I believe this to be mostly untrue. They’ve done a mostly remarkable job of scouting the top indy talent — Punk, Daniel Bryan, Seth Rollins, Dean Ambrose, Cesaro — and elevating most of them to main event status in fairly short time. The Performance Center and NXT may have its issues, but is turning out new talent with several more potential main eventers waiting in the wings.

Overexposure of said talent is the issue.

It’s an issue that’s 15 years in the making at this point, and one with no easy solution. Vince McMahon and WWE answer to too many masters now for there to be one answer: the fans are unlikely to be willing to go back to weekly shows filled with squashes, jobbers and little interaction between top stars, even if it would extend the shelf life of those top stars. The USA Network, with whom the WWE renegotiated a larger deal earlier this year, certainly wouldn’t want to see their three-hour monstrosity filled in such a manner, if it was even possible. Shareholders wouldn’t want to see a product intentionally made worse on a weekly basis, and wouldn’t be able to wrap their head around the potential long-term benefits even if, unrealistically, such a proposal was ever put forth.

Even if returning to a pre-Monday Night Wars programming model would increase network subscriptions as that’s now the only way to regularly see your favorite wrestlers in big matches, the weekly-TV-as-supershow (fittingly enough, in 2011 Raw was briefly known as Raw Supershow as Smackdown-branded talent appeared on the flagship every week, as the brand split quietly dissipated around this time) train is too far gone from the station. We’re too accustomed to seeing most of our top stars in PPV-caliber matches on a weekly basis, and too much time needs to be filled to do anything else.

It’s often said that having TV writers with little to no pro wrestling knowledge is the problem, and that actual wrestling figures like Paul Heyman, Dusty Rhodes, or (insert any of several dozen names here) should have the book. But to turn that idea around, if professional television writers struggle with the outrageous workload of WWE’s current programming, how well are old-school wrestling lifers with no long-term, television writing experience going to do? The TV writers are probably a necessary evil just to tackle the workload, even if much of it is laughably bad. This isn’t to say that WWE creative doesn’t need serious tinkering, just that I can’t think of any catch-all solution that effectively scales the mountain of sheer volume that needs to be written. 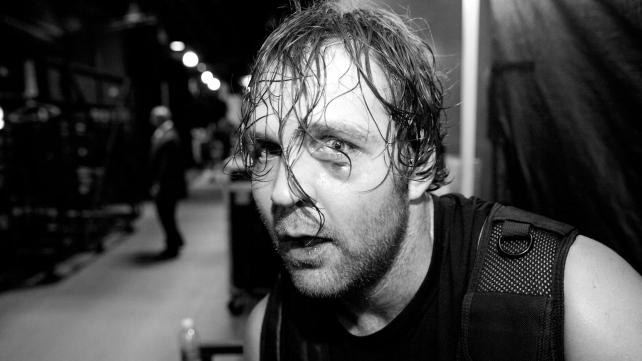 Keeping characters fresh by giving everyone weeks or months off at a time at varying times throughout the year would help, and it’s an oft-made suggestion. The best thing the WWE has going right now, for example, is Dean Ambrose v. Seth Rollins. It’s a feud that can now be stretched out without wearing thin for the foreseeable future because of Ambrose’s month-long break to film a movie. As a fan, while I miss seeing Ambrose every week and the increasingly deafening face pops he’s receiving as something of a ’97 Austin remix, the anticipation of Rollins getting his in the weeks and months to come is, still, the best current thing about WWE programming (aside from Paul Heyman promos, which are in their own category).

But if wrestlers are already unhappy about new payouts in the WWE Network era, I don’t know if they’d be able to be compensated for their time off in a way that they’d accept. Wrestlers aren’t exactly known for enjoying being told they can’t work, and it’s hard to imagine the WWE letting them take their own bookings during a hypothetically mandated time off. (Though, in an alternate universe where this was all possible, it would create some amazing possibilities and be a huge boon to the WWE, independent, and possibly even international wrestling.)

Former Lakers, Knicks and Heat coach Pat Riley coined a phrase three decades ago: “the disease of more.” The concept was a simple one: a team wins a championship. Role players get egos and think they’ve justified bigger contracts, or at least more shots and minutes. Star players get even bigger egos and care more about their celebrity than the next season and the team. Coaches lose their edge and buy their own hype. (Ironically, the last part is exactly what happened to Riley himself. He was the biggest offender of this principle, as the Lakers’ success changed him immensely and he bought into himself as the Showtime architect, even though the Lakers were built and had won championships before he was pulled out of the broadcast booth to replace Paul Westhead, who had replaced the real architect of the organization, Jack McKinney.)

The “disease of more” has taken its toll on the creative side of WWE, and in turn the financial side as well, as the 2014 numbers aren’t a pretty sight. The success of a two-hour weekly show that was in fierce competition every Monday night, at the peak of the industry’s success in the late 90s, created five hours of two weekly shows in an era with no real challenger. Too many hours of television and pay-per-view has created an environment in which building new stars is a delicate proposal because of overexposure, directly leading to the much-maligned 50/50 booking where only a select few have any opportunity to get over short of the fans nearly revolting in their demand for someone.

They won the arms race against WCW, but as it often does, success comes with a price tag.