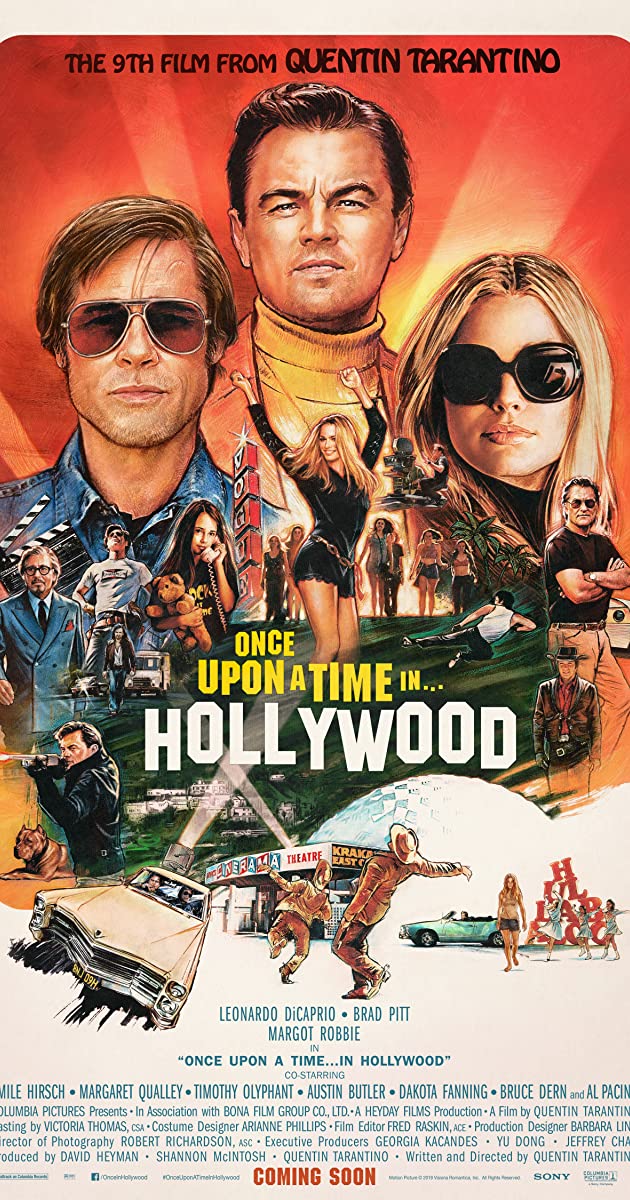 Now Quentin Tarantino is a name I do not treat lightly. The guy is a tour de force in Hollywood. The man made his name with his writing. His dialogue is undeniable. His sense of fashion is unmistakable, and the fun he has doing his job, shows up in spades on the big screen. Based on all of this, I was really looking forward to seeing this picture.

This movie was up for 10 Oscars, and won 2. One for Brad Pitt, which was kind of a “You are getting old and the Academy just wants to thank you for everything you’ve done” Award. The second was for Production Design – which as I said, Quentin wants to have fun and he certainly pushes his design team to have a very cool, hip, unique look in every movie he does. Django had amazing style, Hateful Eight had amazing style and this film just kept the wheels moving. Tarantino wants to make sure his people, his actors, who are saying his dialogue look good doing it, and they do.

Before we move on, let me just address an issue that a member of the press brought up to Quentin himself at a press conference. The question was put forth about Margot Robbie and why her character, Sharon Tate did not have much dialogue. The reporter / film critic thought Margot was just used for eye candy and nothing more. Why didn’t she say much? Quentin is a master of corny, cheesy, pop culture banter – why not lay some down for Margot to say and join the fun?

The director got a bit upset and rightfully so – I mean you work your ass off to write and direct a movie and a stranger simply says – I don’t think this character talked enough – you have a right to get mad. It was a dumb question and it was put in an even dumber way. What should have been said was – Why is Margot Robbie’s entire role just her walking down the street and seeing a movie. It is kind of preposterous when you think about it. But hey – it seemed like he wanted us to think that something was going to happen to her, but doesn’t. Maybe it was a psych out by the master of words? Maybe he wasn’t sure if something was going to happen to her? Who knows? We do know Quentin played around with the whole Charles Manson situation – people saying he was just there, and that he just moved to Santa Barbara and that he was the coolest and all that. Sharon Tate was a victim of it – so who knows. Then you had Roman Polanski, who just simply drove a car to a party, then back home. So that was his whole role. It was like Tarantino was skillfully tip-toeing around the entire Charles Manson situation – but never got to the point. Somewhat like Life of Brian went around the whole Jesus situation but never got to the point. Except Monty Python’s masterpiece was done for comedy gold – this was done for a tension that never really came to fruition.

One more character we must talk about before we move on to the film – the entire Bruce Lee controversy. I was surprised by this because I thought Tarantino would have more respect for Bruce Lee, especially in this time period. If you don’t know, Brad Pitt, a retired old stunt double, gets into a fight with a young Bruce Lee in his prime. Bruce is on set for his show Green Hornet and invites Brad to show him what he’s got. Well, apparently, despite Bruce winning national tournaments and being so fast that a slow motion camera could not catch his movements – Brad is just a bit quicker and more powerful. Brad blocks Bruce’s punches and throws him into a car. Now keep in mind, studios do not hire Brad’s character anymore because he is too old and he might get injured – but he is still strong enough and fast enough to beat Bruce Lee. That is amazing! So that scene defies logic and common sense, but I think Quentin did it to make Brad look cool – so he could maybe win an Oscar or something. Again, Tarantino loves his characters to look and be as cool as possible – and beating the shit out of a Bruce Lee in his prime – would make anyone look like a total bad ass. This scene also hurts the third act – because it makes it predictable.

Let me share with you the one shining glory of sunbeam in this picture – and no it is not Al Pacino, who is just horribly wasted here. The guy has a cup of coffee and that’s it. My grandma could have done that. No the mountain of talent here, and I kid you not, is Leo. Leo was up for all the awards but only won for the BAFTA. I guess since Leo already has an Oscar, to get it again would be Tom Hanks level shit.

Leo plays Rick Dalton – the actual movie star that Brad Pitt mooches off of. I guess that makes Brad cool too, just mooching off a movie star and beating up martial arts legends. Oh and Brad gets to take his shirt off too. I mean Quentin really bent over backwards to give Brad a role to make him shine in. I dunno if these guys go fishing together or what, but one of them really likes the other one.

Anyway – Leo plays Rick Dalton – and what is great about this is Leo gave the actor a bit of a stutter, and a bit of a slouch. Not much, but noticeable if you are looking for it. When Rick Dalton plays a character in the movie within the movie – all that insecurity is gone and you see a strong, confident actor. Basically, Leo does a Clark Kent and a Superman bit here. He does it and he pulls it off tremendously well. I was actually impressed. Good for you, Leo – you showed your acting chops!

Now, finally, let’s get to the story. Rick Dalton’s roles dry up in Hollywood so he and his stunt double buddy Brad Pitt go to Italy to make 4 films. While there, he gets married, comes back home and his house gets robbed, but Brad Pitt fights off the robbers.  The End. Great stuff right?  Oh – and Margot Robbie goes and sees a movie! Wow!

So obviously this film is not plot driven. This is no Angels and Demons. This is not a page turner. This is Quentin making actors look cool and having fun. Is it worth 10 Oscar nominations, no. But compared to the other movies that came out that year, yes. You can only hit the pitches they give you. Tarantino lobbed one high up in the air, and it was a hit. Brad came out looking totally cool, and that was that.

This movie though, does involve the Manson Family. Brad and Leo live next door to Polanski and Sharon Tate. Tate was murdered by the Manson Family in her home along with four others. And Brad actually visits Manson’s compound and gets to meet the Manson Family in person, before they begin their killing sprees. The Manson Family actually breaks into Brad’s house instead of Sharon Tate’s house in the third act, and naturally, Brad kicks all of their asses single handedly. Like I said – someone really really likes the other one. I mean, hey – I wrote a part for you where you kick Bruce Lee’s ass AND the Manson Family’s asses?! What?! Where do I sign and do I get to take my shirt off?

What are your thoughts on Once Upon A Time In Hollywood? Tweet me @pauliek2003 and let me know.