Prior to the 2012 season, Joe Flacco told the media that he was the best quarterback in the National Football League. Unsurprisingly so, there was plenty of laughter and confusion regarding Flacco’s outlandish statement. Well, we’re a mere three weeks away from kicking off the 2013 NFL season, and Flacco rightfully so deserves to be thrown in the hat of names considered to be elite quarterbacks. “Joe Cool” led a magical playoff run which led to an almost improbable Super Bowl victory. A back-to-back championship will be difficult for the Ravens, as key veteran players have either left via free agency, trade and/or retirement, but the team will head into the 2013 season with a boatload of confidence.

Looking at Baltimore’s offseason additions, there’s honestly not much to be optimistic about. Defensive linemen Chris Canty and Marcus Spears are at the tail end of their careers, and they’ve had durability issues with their prior teams. Actually, Baltimore’s best offseason addition in Elvis Dumervil may have originated at the expense of a contract dispute between the Broncos and Dumervil’s former agent. The Ravens should be much improved on the defensive line, with players consisting of Haloti Ngata, Terrell Suggs, Dumervil and others. Rolando McClain was signed in the offseason, and has already controversially retired due to his off-the-field issues. Cary Williams and Michael Huff bring a leadership presence to the secondary, but they aren’t considered elite players at their respective positions. I wasn’t particularly high on Matt Elam coming out of the draft, but he should at the very least compete with Huff for a starting safety spot. Arthur Brown surprisingly fell to the 2nd round, but he’s reportedly had a solid training camp, and he should help to ease the losses of Ray Lewis and Dannell Ellerbe, who will be discussed shortly.

Looking at Baltimore’s offseason losses, it’ll be hard-pressed to be much improved from 2012. Future Hall of Famers Ray Lewis (retirement) and Ed Reed (FA, Texans) are no longer with the organization, and while these players will be missed for their on the field work, one can argue that Lewis and Reed were the faces of the organization. They’re irreplaceable. Anquan Boldin was clutch for Baltimore during their playoff run, and they surprisingly traded him to the 49ers for merely a 6th round pick. Dannell Ellerbe was an up and coming linebacker for the squad, but he took his talents and money to South Beach with the Dolphins. Vonta Leach, Paul Kruger, Matt Birk also played key roles in Baltimore’s playoff success, and they will not be returning in 2013.

For the 1st time since the NFL began scheduling the defending Super Bowl Champions on the opening kickoff game, the Ravens will be forced to travel to Denver for the season kickoff game on Thursday night. Baltimore began their amazing playoff run in Denver, so it will be intriguing to witness the rematch on opening night. Pittsburgh and Baltimore always have physical and tough-nosed matchups, and their primetime matchup in Week 13 will be no exception. The Ravens finish the final two weeks of the regular season with difficult matchups against the Patriots on Sunday night and a key divisional game at Cincinnati, which could very well be for the AFC North crown.

Webb will be returning for the 2013 season after suffering a torn ACL in Week 6 of the 2012 season against Dallas. The talented cornerback was just coming into his own before he was hit with the season-ending injury. If he returns to form, Webb should bolster a Baltimore secondary that sorely needs a spark.

Let’s be realistic, the Ravens got “hot” at the right time and marched on to an amazing Super Bowl victory, but they’ve peaked. Baltimore may have all of the confidence in the world, but one cannot ignore the loss in personnel that the organization suffered in the offseason. They’ll probably win some that they should’ve lost, and lose some that they should’ve won. Although the AFC North isn’t considered the most competitive division anymore, the Bengals will be improved and Pittsburgh will look to bounce back from a disappointing 2012. Cleveland? Well, you know.

The defending Super Bowl Champs will have a bull’s eye on their chest, and with Joe Flacco’s new, lucrative contract, all rests on “Joe Cool’s” shoulders. Can he stay consistent and play at a high level after cashing it in? How will the defense play after the departures of Canton-bound Ray Lewis and Ed Reed? In my eyes, it’ll be an up and down season for Ravens’ fans, which will end up a disappointing season in the end. But hey, no one gave Baltimore a chance in the 2012 playoffs, right? 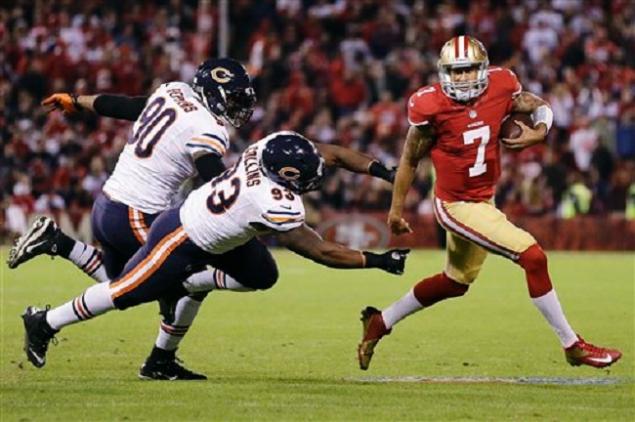 The defending NFC champions will not have an easy path back to the Super Bowl in 2013. The team has a giant target on their back and will be forced to stave off a stacked Seattle team if they want to repeat as division champs. As he enters his second season as starter, defensive coordinators will now have more tape and preparation time for the dynamic Colin Kaepernick. The team still returns their loaded, explosive defense and a top notch running game to go along with their ace head coach, Jim Harbaugh.

Looking to bolster their weak wide receiver core, the Niners signed away Anquan Boldin (921 yds, 4 TDs) from the defending champion Ravens. The addition of Boldin should help ease the loss of top WR Michael Crabtree, who went down to a torn Achilles and will likely miss most of the season. They also bought low on two players that had struggles a bit in their previous stops. Nnamdi Asomugha landed in Philadelphia amongst much hoopla and fanfare, but his on field production never quite matched the money or media coverage his free agency courtship garnered when he bolted from Oakland. He saw an uptick in tackles in Philly, but suffered in turnover creation and overall coverage. Glenn Dorsey was selected fifth in 2008 but never delivered on the promise he showed coming out of football factory LSU. KC hoped Dorsey would be a dominant force on their defensive line, but he only racked up four sacks and one forced fumble in four seasons. DC Vic Fangio will look to resuscitate both men in hopes of seamlessly mixing them into his already dominant defense.

On the flip side, the Niners did not suffer many important losses. The biggest was the departure of bone crunching safety Dashon Goldson, who took off for a well-deserved payday in Tampa Bay. Goldson broke out as a force in 2009 and never looked back. His loss is a tough one but the Niners defensive is so stacked, they should be able to cover the hole that remains. Relegated to backup duty, there was no future for Smith in SF, so his loss doesn’t hurt the 2013 squad in any significant way.

The Niners have a fairly soft schedule, despite an improved division and having to square off with the NFC South. Offsetting those games, the Niners also draw the soft AFC South. Just like last year, the team will have an early chance at making a statement as they square off against NFC heavyweight Green Bay. Their toughest stretch clearly comes late in the season with a home game against Seattle and two straight road tilts in Tampa Bay and Atlanta.

Jenkins was drafted at the end of the first round in 2012, but didn’t see much playing time during the season. After posting fantastic numbers at Illinois, which saw him ranked second in yards in the Big Ten his senior season, Jenkins showed he had the talent in place to become a playmaker in the right system. And in 2013, he may finally get his chance. Jenkins got a lot of buzz in camp, specifically from Kaepernick. Couple that with the injury to Crabtree and Jenkins has “break out player” stamped all over his uniform.

It is hard to sit and say the 49ers could have a better season unless you believe they will win the Super Bowl. I don’t, so I will reluctantly say they will have a slightly worse season. They will still be the class of the NFC and should be playoff bound, but I want to see Kaepernick do it again across a full season, especially with a shaky WR core. Also, the team has yet to fill the hole left by Goldson, who was one of the best players on the team over the last few years. Their schedule is fairly soft, but improvements in Seattle and St. Louis will ensure the NFC West is no cakewalk.

Despite a low-key offseason, the 49ers are in position to eye a return trip to the Super Bowl in 2013. A lot went right for San Francisco last season, so keeping healthy and getting some breaks along the way will be important once again. They have one of the best coaches in the league in their sidelines and GM Trent Baalke has proven that he can balance a win now philosophy with a smart long-term outlook. You know the defense will be there but, as with most teams, the keys to the kingdom lie with the squad’s young, dynamic QB. If Kaepernick can prove he is legit, the Niners just may be standing there hoisting the trophy at the end of the season.