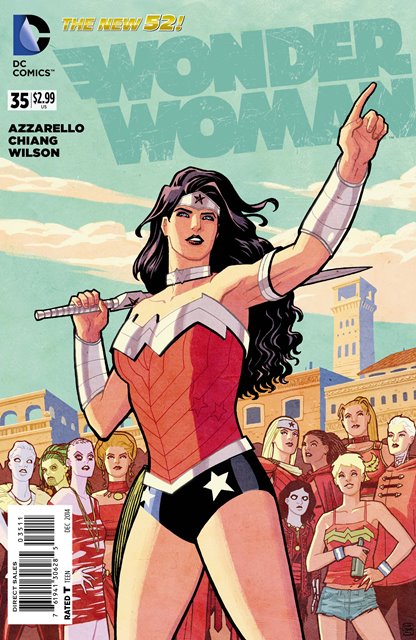 It’s the grand finale of the historic WONDER WOMAN epic by writer Brian Azzarello and artist Cliff Chiang! Saying more would spoil all the surprises – and there will be plenty!

Picked because: If you haven’t read this historic run on Wonder Woman, you have done yourself an incredible disservice. And it may seem odd to pick up the final issue of a creative team’s three-year run, but this issue is said to contain the definitive origin of Wonder Woman in the New 52, which will likely come into play in future WW and Justice League stories. Azzarello and Chiang have redefined nearly everything about Diana and her role in the DC Universe. They’ve also given us a title that was allowed to exist on its own terms, apart from the larger tapestry of the New 52. There was never a mention of Superman or her relationship with him or even her membership in the Justice League. It was like this title existed in its own universe. That only ever served to elevate the book to heights that continuity can sometimes prevent. This might be the most “human” version of Diana ever put to page and it’s easily the most entertaining Wonder Woman story ever written. Several volumes of this run have been collected in trade format, so if you’ve missed out you should be picking those up as soon as possible. If you love Greek Mythology and magical/fantasy-based stories, this book could redefine your views of the ancient gods and turn you into the next big WW fan at the same time. 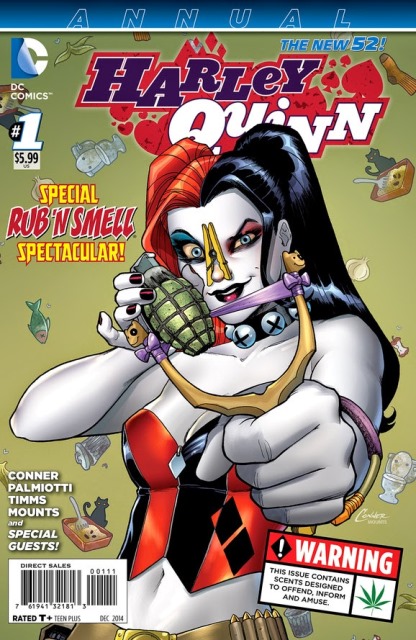 We have to warn you, readers: This issue stinks! Seriously! Like, unpleasant odors are literally in the story! In this first-ever HQ ANNUAL, take a trip to Harley’s home of Coney Island in a groundbreaking “scent-ticular” issue, featuring actual, honest-to-gosh smells. This issue comes polybagged to contain the stench.

Picked because: It’s a scratch-and-sniff issue that’s already causing a lot of controversy for its inclusion of a “marijuana” scent somewhere in the issue. Due to this, you can only get that version of the book in the U.S. while the international version will contain a different scent in its place. That much aside, this will probably be the funniest book you read all week. Harley Quinn has been a great ride so far and one of the best in DC’s publishing line, probably ever. The humor, the art and the pacing are all top-notch and it’s easy to see why: the pair of crazy people writing it! Well, maybe not crazy, but eccentric, for sure. Palmiotti and Conner might be the best husband-and-wife team in all of comics. They just get each other in a way that keeps the humor flowing and we readers benefiting from it. The price tag is a little high, even for an Annual, but don’t let that discourage you from getting what is likely to be the book of the week! 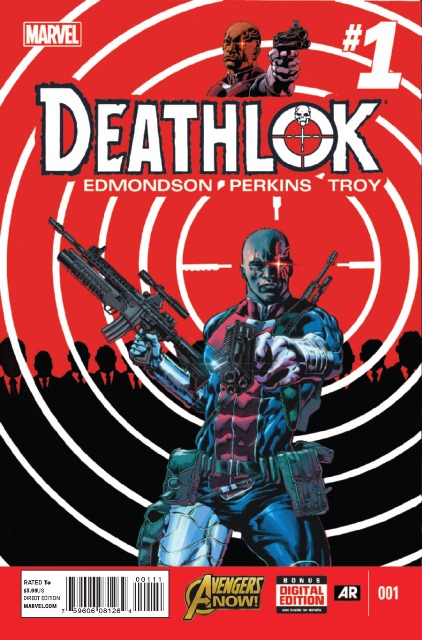 “Enemy of My Enemy”

Picked because: You read it in the teaser copy, this is from the current writer of The Punisher and Black Widow on another badass anti-hero title. If you’ve been reading either of those books, you’ll probably want to check this one out, too. Edmondson has proven to be one of the best action-based storytellers at Marvel today with a real emphasis on letting the art set the pace. The Deathlok character had a recent arc on the Agents of S.H.I.E.L.D. TV show, so obviously Marvel is hoping to capitalize on the name recognition. Mike Perkins’ approach to quick-cut panel layouts and a break-neck sense of urgency will make and keep this book from every feeling dull. If you’ve been hoping for a book that combined all the espionage and intrigue of James Bond and Jason Bourne with the unrelenting power of The Terminator, look no further! 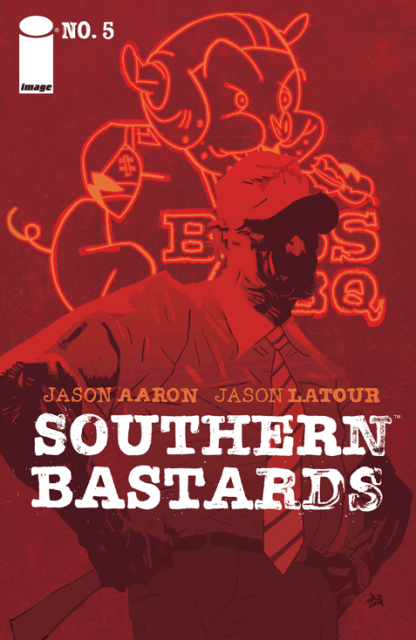 The hit southern crime series returns, as JASON AARON (Scalped, Thor: God of Thunder) and JASON LATOUR (Wolverine & The X-Men, Loose Ends) pull back the curtain on the history of Craw County and its most famous and feared resident. In a place where only bastards flourish, what does it take to be the biggest, meanest, most powerful bastard of them all? Only Coach Boss knows. And if I was you, I wouldn’t ask him.

Picked because: My pick for comic of the year kicks off its second story arc with a deeper look at the main villain, Coach Boss, and his rise to power. This is Southern Gothic Crime/Noir at its absolute best! Aaron’s scripts are oozing with the sweet and bitter nature of Southern culture along with the intense pencils from master artist Jason Latour. Without both of these guys, this book just wouldn’t be the same or pack as much punch. Every page is accentuated in exactly the right way and with expert timing. Boredom is something you will never suffer from with this title. At the end of the last story arc, we’re left wondering just what’s going to become of main character Earl Tubb. Did he survive that merciless beating? What happens to Craw County now? Jason Aaron is an incredible craftsman with his stories, so this one will definitely keep things moving forward in a way that’ll keep you coming back for more, just like the sweet tea and pulled pork at Boss BBQ. Who’s up for seconds?