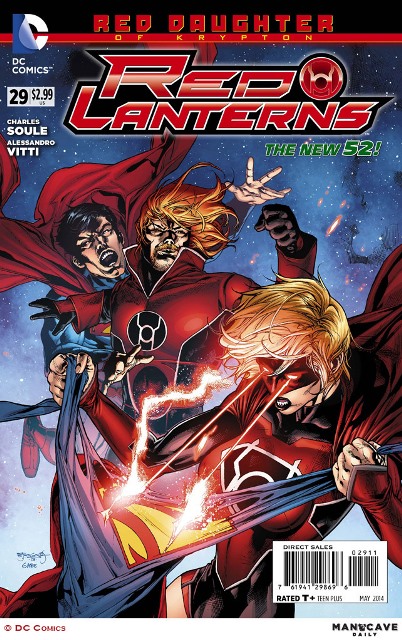 The Reds have found their newest recruit: Supergirl! Guy Gardner is hardly equipped to handle a teenaged Kryptonian Red Lantern, so he heads for Earth and hand her off to her cousin, Superman! But Superman is…unimpressed by Guy’s leadership skills – or lack thereof…

Picked because: It’s easy to get drawn into how well Charles Soule writes Guy Gardner and the overarching story of this new anti-hero squad, but really it’s the little moments that make it so much fun. Conversations between Zox and Skallox have given this series exactly the comedic banter it’s always needed. The opening pages of this issue are no exception to that and prove to be some of the funniest material yet. But that doesn’t mean there’s no action coming. Supergirl has joined the Red’s ranks and is proving to be way more than Gardner can handle. She may have her sanity back, but she’s no more controllable than before. When Gardner takes her back to Earth to dump her off on Superman, you can bet some angry words are going to be exchanged between all of them. There’s also the little matter of Atrocitus having possession of a red ring again and his plot to take back control of the Red Lantern Corps. What’s not clear is if Supergirl will side with Guy, Atrocitus or none of them. If you’ve not given this book a chance yet, you really need to correct that now. It might have been a one-trick pony in the beginning, but Charles Soule and Alessandro Vitti have made it into the best book in the entire Lantern line. Easily the most impressive 180 in the entire New 52. 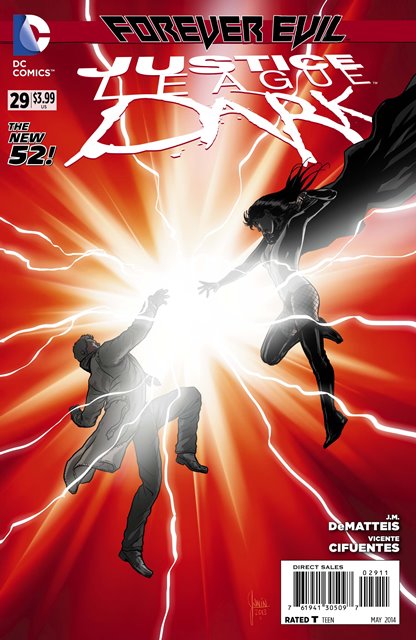 Art and cover by Vicente Cifuentes
$3.99

“FOREVER EVIL: BLIGHT” conclusion! Witness the self-destruction of John Constantine, who might just be more vile than any of the villains in FOREVER EVIL!

Picked because: Forever Evil #7 might have been pushed back to May, but Forever Evil: Blight is still going to wrap up this week. Some huge revelations came to light in the last chapter (Pandora #9) and Felix Faust has found himself a conduit of more knowledge and magical ability than any other mage in the DC New 52. Whatever destroyed the Crime Syndicate’s Earth is still coming and Faust believes using all mages, good and evil, as cannon fodder in his new weapon might be powerful enough to stop it from destroying their world. He just didn’t think to ask for permission since it likely means the death of magic and those who wield it. The real question now is: what will Constantine do? Blight has been hit-and-miss throughout the crossover chapters between this title, Trinity of Sin: Pandora, Trinity of Sin: Phantom Stranger and Constantine, but the last few have been more exciting than expected. The conclusion might seem an odd place to jump in, but J.M. DeMatteis has a way of crafting endings that feel like great starting points, too. And in the current DC universe, there’s nobody who has a better grasp of what makes the magic-based characters work. And look for this to setup the next year of magic stories for this and pretty much all the other titles in DC’s “Dark” line. 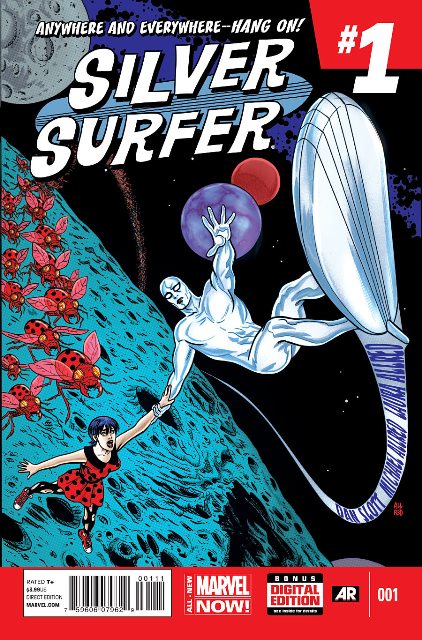 The universe is big. Bigger than you could ever imagine. And the SILVER SURFER, the lone sentinel of the skyways, is about to discover that the best way to see it… is with someone else.

Meet the Earth Girl who’s challenged the Surfer to go beyond the boundaries of the known Marvel U– into the strange, the new, and the utterly fantastic!

Anywhere and Everywhere… Hang On! THE SILVER SURFER

Picked because: Stop me if this sounds familiar: An ancient cosmic being, both loved and feared by many throughout the universe, is traversing space and time while taking along an Earthly companion on the ride of her life. Dan Slott might be known for his excellent Spider-Man run, but he’s one of the biggest Doctor Who fans walking the planet, too. His idea to make Silver Surfer into Marvel’s version of The Doctor is absolutely brilliant and stands to be THE breakout hit of the spring for the company. Having Mike Allred on art duties doesn’t hurt, either. The Marvel cosmic universe has been rather limited to Guardians of the Galaxy and Nova lately but, like the name suggests, there’s a whole universe out there to explore. That’s where the Surfer comes in. The one-time Herald of Galactus is trying to do real good in the universe, but given his incredible power he can be seen as both a savior and a destroyer, depending on who’s on the receiving end. He, of course, is benevolent, but often a bit aloof, much like the good Doctor. And while he might not cruise around in a Tardis, his board is more than capable of doing the same things and more. This is the kind of adventure book Marvel needs to really boost its cosmic line. Something that’s not loaded down with connections to other titles and that’ll feel very familiar to fans of this kind of sci-fi/fantasy story. If you love Doctor Who, even slightly, this is the book you shouldn’t miss this week! 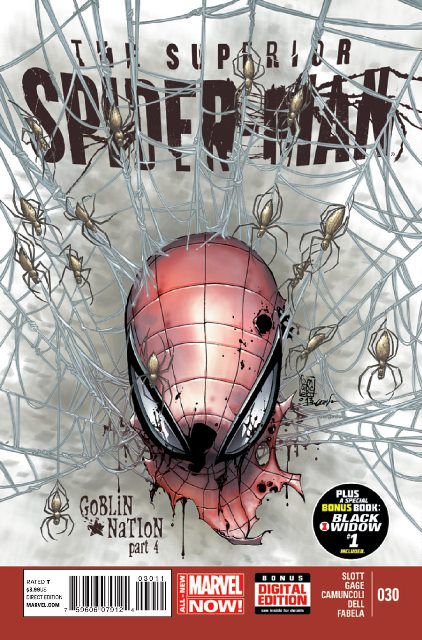 • Since the start of DYING WISH, it has ALL been building to this.

• One of the most important moments of the ENTIRE Superior Spider-Man Saga!

• Once this happens, it CANNOT be undone!

• DO NOT MISS THIS ISSUE!

Picked because: This is where Norman Osborn finally shows everyone he’s been in control the whole time! Doc Ock may have fancied himself Spider-Man’s greatest villain, but any Spidey fan knows that title firmly belongs to the original Green Goblin. Even with Spider-Man 2099’s help, Ock isn’t going to have an easy time getting back in the fight. Ock has watch everything be taken away from him and burned to cinders in the previous three issues, but there’s one more person left for Norman to hurt: Ock’s girlfriend Anna Maria. The Avengers, Cardiac and Wraith are in the mix, too, but with so many Goblins and newly-activated Spider Slayers flying around, their hands are a little full. But what we’re all wondering is how infused is the recently-reemerged Peter Parker’s mind with Ock’s memories? Is there anything really left of Peter in there? This is the issue where it all has to come to a head. There’s only one issue left of this series after this one and each issue has had one massive revelation after another. Dan Slott is a mad genius who isn’t going to let an opportunity like this to slip by without dropping something huge in the reader’s lap. And once Ock does finally get his hands on Norman, we’re going to finally see him come truly unhinged. It’s a shame to see this title end, but if it’s got to end, this is the kind of story to send it off, proper.

Scott Travers’s special suit lets him move through our world unseen and untouchable within a shadowy parallel dimension—but he doesn’t know how the suit works or where it came from. With his benefactor missing and unfriendlies after his Blackout gear, Scott must find answers before the answers find him!

Picked because: Image United didn’t turn out so well for that company, but Dark Horse seems to have a plan that might work out better. Blackout debuted in Dark Horse Presents #24 last May but now he’s part of Project Black Sky, the overarching story that’s bringing together X, Ghost, Brain Boy, King Tiger, Captain Midnight and others. This four-part miniseries is laying the groundwork leading up to the Free Comic Book Day “Captain Midnight & Brain Boy” issue. And with Frank Barbiere, writer of the critically-acclaimed Five Ghosts, this is bound to be one of the best titles Dark Horse has produced in a long time. It has elements of sci-fi noir stories like The Terminator and popular video games like Portal, Metal Gear Solid and Doom. The backup feature featuring King Tiger brings back a character who hasn’t been seen for a really long time at Dark Horse, as well. What’s old is new again at Dark Horse, but this is also the time when new heroes and characters will get a chance to shine. This is also a solid entry point for those unfamiliar with Dark Horse’s other heroes, but still not too exposition-heavy for those already initiated. If you want something different, yet still with a superhero feel, this might just be what you’ve been waiting for. And even if the whole thing doesn’t turn out that great for you, it’s only four issues long.