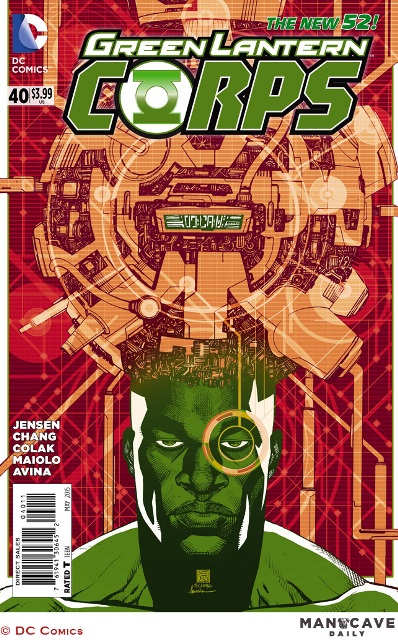 John Stewart comes face to face with the failure that has haunted and defined him for years – the destruction of the planet Xanshi. Will he find salvation as history threatens to repeat itself? Plus, a moment that will forever alter the course of the Corps in a final issue that had to be extra-sized!

Picked because: Some comic stories are looked back on as “defining” and Van Jensen’s time on Green Lantern Corps can be called that for John Stewart. He took the most stoic of the Earth Green Lanterns and made him into one of the most relatable and intriguing characters in the mythos. Sadly, this title is coming to an end and this might be the last we see of Stewart for a while. But he’s going out with a bang in a way that only Jensen and his GLC-collaborator Bernard Chang could deliver. It’s always tough to say goodbye, but it’s especially so with a title that has been so good for so long. Jensen is continuing to write The Flash (with GL writer Robert Venditti), but he will be sorely missed in the Green Lantern line. As will the Green Lantern Corps title. Hopefully we’ll see more from this great team somewhere down the road. 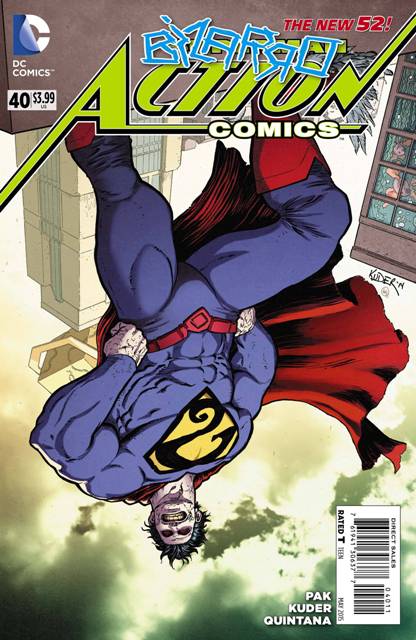 Bizarro make Superman sane! Happy to see each other! No fighting ever!

Picked because: Because sometimes you just need to cut loose and have some fun! Pak hasn’t written Bizarro yet and this is likely not going to be about the same Bizarro we saw during Forever Evil and it may not even be in proper continuity. And that won’t take away from the fact that it’s an issue centering on one of Superman’s most hilarious villains and it’s being drawn by Aaron Kuder! Pak himself described it as the most ridiculous thing he’s ever written and that’s coming from the guy who created Code Monkey Save World (which is awesome and hilarious, too!). And we just might be getting even more of this kind of craziness in June, too. 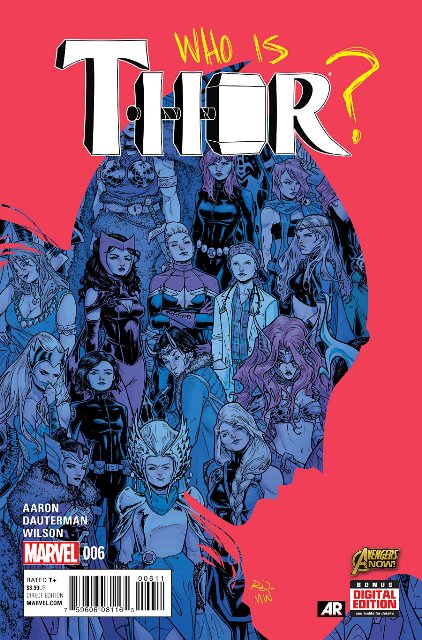 Picked because: Despite the fact that we won’t actually find out who’s under Thor’s helmet until issue #8, this is still going to be one of the most fun issues of the week. Russell Dauterman is back on art duties and drawing some of the best pages he’s rendered yet. And we get to see the Odinson on the case of his new mystery replacement. And don’t forget that the bigger story arc from God of Thunder is continuing to weave throughout this series, too. Jason Aaron has given us so many great things to love in both of his Thor series, and this issue is no-doubt continuing that level of fun. Could the new Thor’s name be on Odinson’s list? Is it someone no one has named yet? We know Jason Aaron has already introduced her in the series prior to her becoming the new Thor, so that’s a starting point. And it’s fun to see her kick ass, too, so there’s plenty to love about this series. 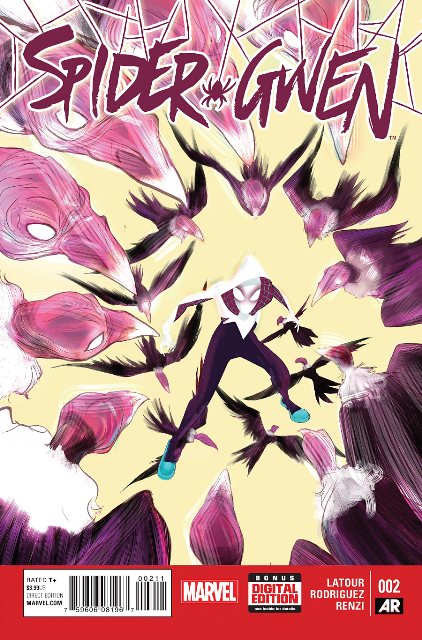 Art and Cover by Robbi Rodriguez
$3.99

WHO IS THE VULTURE?!

Picked because: After a hugely entertaining first issue, the action is turning up to 11 for #2! Reading Gwen in this capacity is a strong reminder of how much she and Peter were alike and why they were such a great couple. But this story isn’t about that at all, it’s about how great Gwen is as a superhero and how much fun she is to read every month. This might be Marvel’s most refreshing title of the year. Ms. Marvel fans should definitely be checking this out. If you picked up Edge of Spider-Verse #2 and loved that, you should already be on this book. We got hit with a cliffhanger at the end of #1 and this new version of Vulture is just as sadistic as his 616 counterpart. What’s really fun about this series so far is seeing the new versions of classic characters. Frank Castle as a police officer? Ben Grimm walking a beat? Can’t wait to see what they do next!

Alex Braith is on board retracing her sister’s steps to the refinery moon, hoping to collect her remains and find some answers. The questions keep coming though — how did her sister die? Where did her cabin mate disappear to? Who is that creep across the hall? And why does she always feel like she’s being watched?

Inspired by classic mysteries and weird fiction, SOUTHERN CROSS is a crucible of creeping anxiety and fear as Braith struggles with the ghosts of her past on board a ship that holds secrets best kept buried.

Picked because: Becky Cloonan continues her rise to prominence in the comic book world as both a writer and an incredibly talented artist. This murder/mystery in space with a psychological horror twist is likely going to turn some heads this spring. Her friend and artist, Andy Belanger, got some attention for his work on Kill Shakespeare a few years ago and he’s also done a couple of books for DC including a Fringe tie-in and some fill-in work during Scott Snyder’s Swamp Thing run. Like Descender last week, this looks like another big sci-fi winner for Image and one fans of non-superhero comics are going to need added to their pull lists soon.