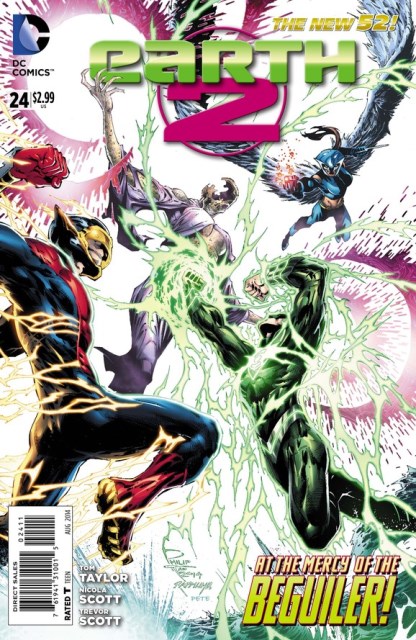 Aquawoman leads Green Lantern, Hawkgirl, and The Flash to battle Beguiler in the middle of the ocean! And Superman makes an unprecedented move that could change the future of Earth 2!

Picked because: This story arc has been quite a ride so far. Superman, as it turns out, is likely not brainwashed by Darkseid and now knows his wife, Lois, isn’t dead, but had her consciousness downloaded into a cyborg body making her the Red Tornado of Earth 2. The other heroes are going to take center stage this issue, though, with the rescue efforts to bring Flash home, but that’s probably not going to be as easy as anyone would like. Nicola Scott takes a break this issue for some Eddy Barrows art, which isn’t a bad trade necessarily, but let’s hope she’s not gone too long. Earth 2 has largely been defined by her incredible pencils and attention to detail. More revelations are likely to happen in this issue as we get closer to the conclusion of this story arc and the Futures End event in September. How many other Kryptonians might still be out there? Is Superman beyond redemption? What really happened to him after issue #1? Could Wonder Woman or Batman have survived, too? There’s lots we still don’t know and plenty of hints being dropped along the way. Make sure to pay close attention to anything Doctor Fate says as, according to series writer Taylor, he’s essentially the roadmap for the series. 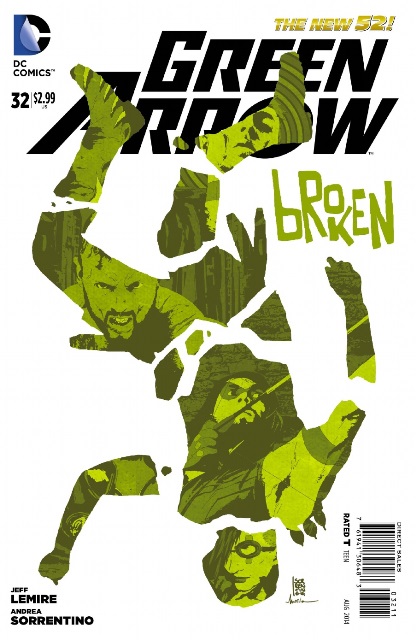 Art and cover by Andrea Sorrentino
$2.99

With Seattle under siege and Diggle in the grip of crime lord Richard Dragon, the Queen Legacy must find a way to move on. But is that even possible given the violent aftermath of The Outsiders War? A brand-new storyline and perfect jumping-on point to Lemire and Sorrentino’s popular run, as “Green Arrow: Broken” begins here!

Picked because:  Time for a new story arc to kick off after the incredible Outsiders War finally concluded last month. Ollie coming home is only going to make a volatile situation worse, but this is still his home turf and he’s going to have more than one trick arrow in his quiver. Jeff Lemire has really turned this title around in the short time he’s been on it. Once one of the major failures of the New 52 is now one of its great successes. More people need to be reading this book, especially now. Last story arc took Ollie and company all over the world and explored his origins in a way that hadn’t been in the New 52 previously. Now, this story looks to focus things more on the ‘why’ behind Green Arrow. We know what he is and how he came to be, now with some old enemies coming back we’ll get some deeper reasoning behind the Emerald Archer. Andrea Sorrentino has defined this run as much, if not more, than Lemire. His layouts are some of the most eye-popping in all of comics and he knows more about packing emotion and suspense into a few panels than a lot of movie directors know about putting in two-hour-plus films. If you haven’t tried this book before, this is the jump-on point you’ve been waiting for. If action and suspense with great character development and dialog are your things, you owe it to yourself to start reading this. 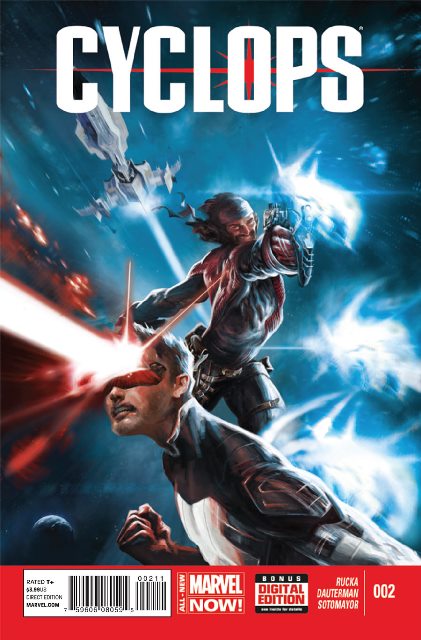 • A father and son mend fences the best way possible – on an intergalactic road trip!

• Stop one? The spectacular resort world of Dixzit, where Scott flirts with aliens. Badly!

Picked because: Issue #1 gave us a great introduction to the characters Rucka is planning to use in this unique series, but now it’s time for tonal establishment. The meat of this story is all about a father and son getting to know each other again, for the first time. A sort of “cosmic road trip,” if you will. This young Cyclops hasn’t experienced as much in life as his older counterpart and he clearly doesn’t like who he grows up to be (which might be Rucka’s clever, back-handed way of saying what he thinks of the current character, too). What makes this book worth picking up is that this is where the main part of the first story arc is going to kick off. What new things will Scott learn about his dad and will Corsair be able to repair a damaged relationship before it even truly begins? The Summers family has a long and interesting history throughout Marvel Comics and this chapter is sure to be one for the ages. Those familiar with Rucka’s work in and out of the Big 2 should make sure they add this to their pull lists. Those looking for something outside the norm but with a few familiar faces should do the same. Marvel has been on a roll with their solo titles of late and this is looking to join the ranks of their best. Hard to say ‘no’ when the writing is this good. 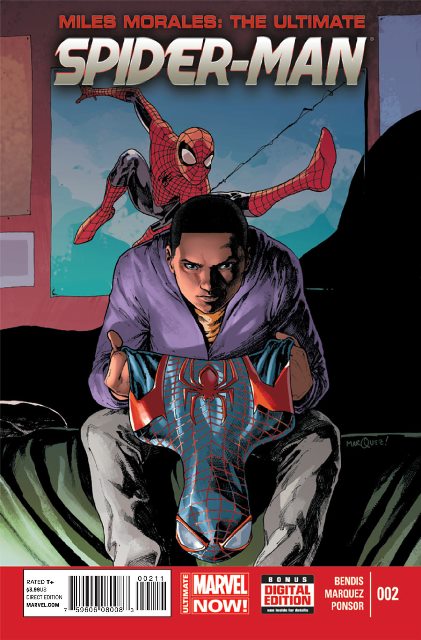 PART TWO OF THE BIGGEST SPIDER-MAN STORY OF THE YEAR

• After the mind-blowing reveal at the end of the first issue, miles life will NEVER be the same again.

• With SHIELD gone, the biggest villain in SPIDER-MAN history is out and nothing can stop him.

• Miles has made a huge choice about the woman he loves. Will he live to regret it?

Picked because: If you read issue #1, you know exactly why this is on the list this week: Peter Parker is alive?!? And apparently he wants his webshooters back. What does this mean for the book going forward? It just launched a new #1, so they wouldn’t remove the title character already, right? Not likely, but this is a pretty big development and is likely to be the part of the story that leads into the big Spiderverse story by Dan Slott and maybe a major point for the Spider-Men sequel currently in development. If you’re reading one Spider-Man title, it might do you some good to pick them all up. But, it’s also probably o.k. to just stick with one. This one’s not a bad choice on that front, either (putting it mildly). Bendis has spent so much time and effort crafting this story that it’s taken on a life of its own. He has really made this into must-read comics thanks to his dedication and characterization of both Ultimate Peter Parker and Miles Morales. The question of could Miles really truly replace Peter has been answered, but the more important question of if they can coexist is just getting started. This is a historic point, folks. Don’t neglect it. 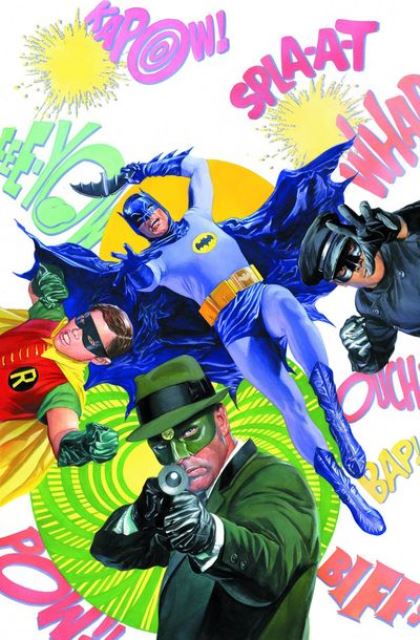 In 1967, television history was made when two masked crime fighters met in a historic crossover. Now, superstar filmmaker Kevin Smith and actor/comedian Ralph Garman join forces with artist Ty Templeton (BATMAN ’66) to bring these two iconic characters and their famous partners together again. Set in the continuity of that earlier team-up, Batman, The Green Hornet, Robin and Kato must go up against a very different General (formerly Colonel) Gumm. What crime could be so deadly as to force these rivals to put aside their differences and join forces again? And what surprise does Gumm have up his sticky sleeve?

Picked because: Kevin Smith doesn’t exactly have the best track record for meeting a deadline (sure, I’m one to talk), but maybe with a co-writer he can reign some of that in. The silly premise here should be right in both writers’ wheelhouses and will likely lead to some really cool and funny gags. And fans who loved the first time these two crossed over way back when definitely don’t want to miss out on this. It’s rare for comic publishers to cooperate in such a way, but this seems like something that could really work. Though it does add to the speculation that DC might be making a play to buy Dynamite Comics. Let’s hope not, but let’s also hope for more fun collaborations like this to happen in the future. Green Hornet and Batman have both been treated as uber-serious characters in the last few years, so this will be a nice change of pace for both. Light-hearted, all-ages fare that might just make you nostalgic for the “good old days.” If you don’t care for that sort of thing, at least you’ve got everything else. For those wanting to have a little childish, “WHAM! BOW! PoP!” fun, look no further. And you can’t miss out on that incredible Alex Ross cover, either!