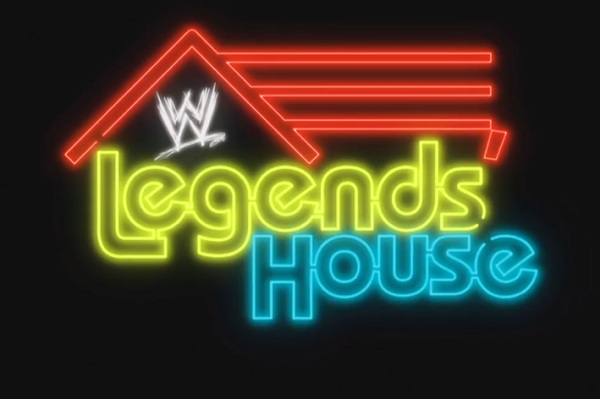 Scott: Place to Be Nation, it’s now time for another geriatric battle royal, otherwise known as your Legends House recap! Last week the guys won the LARP battle for Ashley, and then had a legitimate family meal (except for Jimmy Hart, who still has that skinny rich chick diet). Tony Atlas is still off kilter but at least has shown a fun side. Gene and Pat are still lazy as all hell and criticize everything. What is in store for our legends this week? Well before we dive in let me bring in my favorite PTBN employee (next to Ben Morse of course) and that is the Executive Producer of the Steve Corino Show, Dan McGinn!

Dan: Thanks Scott. It seems like only yesterday, you and I were chatting up Episode #6 and now here we are! It’s great to be back. I can’t imagine anything being able to top the LARPing show but then again, I probably said the same thing after the Chippendales program. I also take no offense to playing second fiddle to Ben Morse. It takes a real man to actually watch Total Divas. Now today’s episode is entitled Heartbreak Hotel. Might this be the show where all hell breaks loose and tempers reach a breaking point? Keep reading there tough guy! Hooooo! Let’s get it started Scotty!

Scott: Wait was it yesterday? Wow time flies. Well we open with a recap of last week, where the guys bonded and then we hear Gene says “Holy Balls” again. When I hear Ashley say “Hi Boys”, well…never mind. The guys head out for breakfast and immediately the annoyances come out. Jimmy, EAT SOMETHING YOU BONY LITTLE SHIT! Piper wants separate checks. Is he implying somebody is going to stiff the bill. Gene even thought something was going to go down and nobody did. The guys get home and there’s Ashley, smoking hot as usual at a game show set, and it is a game show. Who’s the dorky guy hosting? They should have gotten somebody like Abraham Washington, or William Regal. It looks like a version of the Newlywed Game. Dan, this may be what Justin Rozzero and I do for PTBP #400!

Dan: That’s not a bad idea! So the boys are competing to see who knows their roommates the best. I find the Hacksaw/Piper relationship facinating. They were working for Vince at the same time during the Golden Era yet Duggan says he knows nothing about him. Piper playing the true heel is cheating like nobody’s business but since the points are fake, they all let it slide. Apparently you must be a heavy snorer if you want to become a WWE legend. Hillbilly nails the food question about Jimmy which is a surprise to no one! Maybe I should try the “beans and potatoes” diet. Haha, the camera clearly caught Duggan feeding Piper an answer and then in the confessional, Hacksaw sells it like they have known each other since the beginning. Great stuff. I’m sure Scott is fuming over there. Oh God, who’s favorite food is toast Fink? Seriously!!

Scott: Yeah, really toast? Duggan is turning heel here with Piper, which is what I DO LIKE ABOUT HIM! Like his Mid-South days. Now we go in reverse and the other guys now get a chance. Wow poor Pat can’t help but rip Fink’s gut. That’s low, as none of these guys are really svelt. So that’s how you spell Chitterlings! The partners return and everybody wears boxers to bed. Piper talks about Duggan in drag. Tell me ANYBODY would want to see that vision. I DARE YOU. I Want Hillbilly Jim to be on our payroll. Wow, Jimmy being accused of cheating! I love all these former heels bringing back old habits. Piper is really going heel and practically yelling the answers to Duggan. This is great! I think hosting this would be anybody’s dream job. I see a battle royal coming. Get the Ben-Gay ready!

Dan: This is getting intense. Everyone is snipping at each other over cheating. Jimmy is such a tool! Like the prize is going to be so awesome that you need to get that excited over getting correct answers. Oh my God! Hacksaw just said that he could not live without “life.” What the hell does that mean? Holy crap I had to stop typing because I was laughing so hard. Gene follows up by saying that he couldn’t live without his hair. Tony was beside himself. I love his line about Gene living without his hair since he was a teenager. Piper now confesses that he was cheating the whole time at the very end. He scribbled the word “wife” on the palm of his hand and Hacksaw read it wrong. Holy crap this episode is amazing! Oh and that prize they all were cheating to win was tennis lessons in their own backyard. What a letdown. This is like the King of the Ring 1995 of prizes if you ask me!

Scott: HAHAHA excellent analogy Dan. What is Mo reading the scroll? If we see any of these guys with their shirts off? Jimmy’s talking trash and Hillbilly isn’t liking it one bit. Looks like Piper is leaving the house for a bit as he has autograph signings in Atlanta. Duggan says he’s lost without him. I’d have to agree since he’s really not close with any of the other guys in the house. Wow Duggan is walking around the house completely lost with Piper out of the house. Pat is breaking his balls about Duggan missing Piper. He keeps leaving him messages. Now Triple H knows how I feel dammit! Wow now Duggan is snapping over wrong numbers. This is like when Ben Morse big times me! So depressing, right Dan?

Dan: Yeah that was a pretty amazing sequence of Hacksaw losing what’s left of his mind. Like we’re talking Steve Corino/Ryne Sandberg levels of obsession right there! I love Pat, as always, with the line of the show. “What are you falling in love with him.” Hey look, it’s the Heartbreak Kid, Shawn Michaels. When he isn’t looking homeless or screwing Daniel Bryan, HBK is a big time outdoor and fisherman. He takes the guys out on the water for some fishing. Gene tries to rope Michaels into joining the Legends’ House but I don’t think he’ll accept. Next he gets cornered by Tony (pretty easy since they are on a boat and all) and he talks about cooking chitlins. I can only imagine how awful that stunk up the house. Finkel fails at life again. He thinks he caught a fish but wound up catching a log instead. Eventually the fish started biting and Shawn was happy he got the fellas out of house for awhile.

Scott: WATCH YOUR MOUTH WHEN TALKING ABOUT THE KLIQ MCGINN! Or you will end up watching TNA with a certain J.H. Seeing Shawn brings it to another level. Looks like they had fun as fish were caught by all. Now they are cooking the fish back at the house and Jimmy is really starting to drive everyone crazy. Gene is about to stab him with the filet knife. Jimmy almost lost his glasses in the oven, damn it would have been great if they melted. Gene and Pat are talking with Shawn about the business. Those few seconds may be my favorite moment of the series so far. Shawn has added so much to the house in this episode and it gave most of the guys serious clarity. It’s amazing what kind of an asshole he was in the mid-90s and how different he is now. As Shawn leaves that wraps our show up. This show is getting better and better by the week. Jimmy has definitely replaced Atlas as the most annoying guy in the house. Final thoughts Daniel?

Dan: Oh absolutely. Tony is the guy you take in small doses and Jimmy is the guy you wish you never heard from again. I thought he would be my favorite on the premiere but he is as pleasant as a bad rash. I loved the Shawn appearance and I almost wish that conversation he had with Gene and Pat was longer on the show. Not to sound like Hacksaw, but I did in a way, miss Piper towards the end but having HBK in the fold made this episode feel special. I am starting to mark out though when Gene gets mad. “What a piece of garbage,” he proclaimed when talking about Jimmy. All in all, another fantastic episode and because Countdown has been, for lack of a better term, bull penis lately, this is easily my favorite show on the Network. Great stuff as always Scotty C. and remember this, you can’t live without life tough guy! USA! USA!